Will Mamata’s alliance game pay off?

Politics heats up after Mamata Banerjee’s meeting with Sonia Gandhi; they are giving slogan ‘Save democracy, save nation’

Even as Mamata Banerjee went to meet Sonia Gandhi and Rahul Gandhi at their residence during her Delhi visit, I recalled the West Bengal election! For Mamata, it was a matter of political life and death as the Bharatiya Janata Party had left no stone unturned to defeat her. Every trick in the bag was being tried. Mamata Banerjee must have expected that secular parties would support her against the BJP. Of course, the major onus for this was on the Congress, but Sonia Gandhi and Rahul Gandhi did not show any mercy to Mamata.

Congress entered into an electoral alliance with the Indian Secular Front under Pirzada Abbas Siddiqui of Furfura Sharif. It was a great loss for Mamata. It is, however, another matter that it hardly had any effect on Mamata’s electoral fortunes. She returned to power with about 48 per cent of the votes and the Congress ended up with just 2 per cent of the votes and it could not win even a single seat. It is evident that Mamata must have been upset with the attitude of the Congress, but the political maturity she has shown for the sake of opposition unity has only added to her stature. Putting aside her displeasure and the bitterness of the West Bengal elections, she went to meet Sonia Gandhi at her residence where Rahul Gandhi was also present. So Mamata’s message is clear that for opposition unity, she will not mind going to every doorstep where there is a ray of hope. Although she could not meet Sharad Pawar, both of them must have definitely spoken over the phone.

I had written in these columns during the run-up to West Bengal Assembly elections that Mamata Banerjee will return to power after which she will work at the national level. And this has already begun. I perceive a big deal of change in Mamata Banerjee. Certainly she is a well-mannered, very experienced and outspoken politician. Her whole life is a saga of struggle. She has understood the exigencies of time very well. Her maturity is reflected in the fact that on one hand she meets Prime Minister Narendra Modi in Delhi and on the other, she seeks to evolve a strategy for opposition unity. During the press conference, she once again raised the slogan ‘Save democracy, save nation’. Her message to the opposition parties is crystal clear that the need of the hour is unity of opposition parties. This is also her right as a people’s representative. It is crucial to have a strong opposition party in a democracy and this is also a healthy tradition of Indian politics. The country’s first Prime Minister Pt. Jawaharlal Nehru also favoured a strong Opposition. Pandit Nehru also exemplified this by his own conduct. He facilitated the entry of many leaders of national stature inside the Parliament.

Mamata Banerjee may have defeated the Narendra Modi-led BJP in West Bengal, but she knows that without the Congress at the national level, the opposition unity cannot be strengthened. She knows that over the years the Congress has become headless and moved away from the people on the ground, but even today the grand old party has about 30 per cent of the vote share and its roots are spread from villages to cities. And if the Congress wakes up for the better, it will take no time to completely change the political landscape.

Mamata Banerjee also knows that the Bharatiya Janata Party she has pitted herself against has changed completely. It is not the BJP of leaders like Atal Bihari Vajpayee, Lal Krishna Advani or Murli Manohar Joshi. It is now a Narendra Modi-led BJP. Narendra Modi created his own culture in politics. He has become the high command of BJP today. He is the most popular leader of the party. He has also carved out a special place in the RSS, the progenitor of the BJP. Though Modi ji comes from the Sangh Parivar itself, he has a different way of thinking and working. If such Narendra Modi-led BJP is to be wrestled with and defeated at the national level, the different forces opposed to the BJP will have to be united. And this cannot be done without Congress. It is not possible to dislodge Modi ji without Congress on board.

Mamata Banerjee has vast experience in overthrowing the two-and-a-half-decade-old government of the cadre-based Communist Party of India (M) and remaining in power for more than a decade. She is a grassroots leader, a past master at street politics and not afraid to face brute force. She is ready for every battle like a fearless warrior. Certainly, she is packed with confidence and hence if the opposition parties come together, the BJP can be vanquished at the Centre.

Now the moot question is whether Congress is ready for such an alliance? If yes, how would it like to see itself in the alliance? The question also is, if Congress does tag along, will it accept Mamata Banerjee or Sharad Pawar as its leader? Will the regional party leaders like Akhilesh Yadav agree to accept Mamata’s leadership?

The questions are aplenty. The answers to these questions will decide the direction of Indian politics. And the biggest question is will the alliance win the battle against Modi ji with the mere chanting of the slogan ‘Save democracy, save nation’? 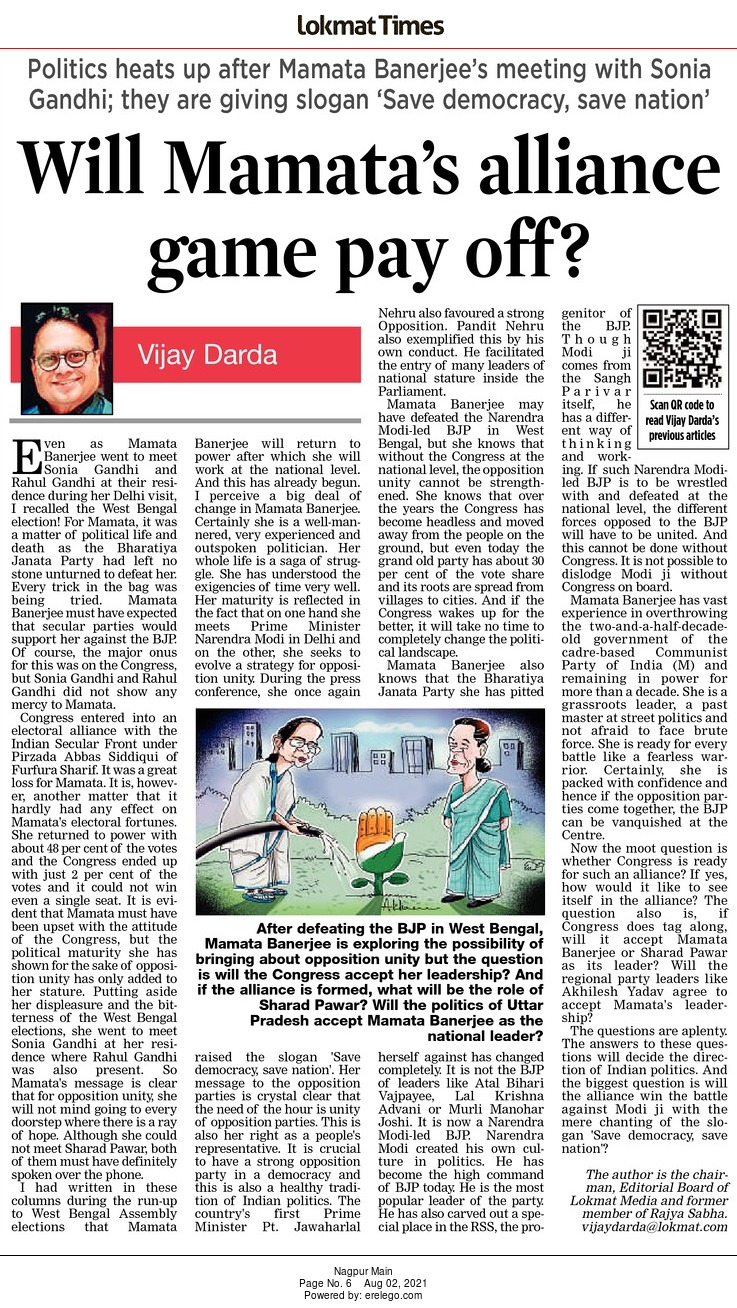 Will Mamata be the face of national politics?

Why has muscle power politics become a norm?

Why the dream of Opposition unity is incomplete?