During the course of everyone’s life, relationships do run through several phases. There are ups and downs. The major difference for those in public life, is that they are critically exposed to the probing eyes, especially when they are down. These days, we are witnessing a public exposure of the events that took place in the entirely private domain. The 83-year-old Natwar Singh, a former external affairs minister and Congressman, has come out with this autobiography, “One Life is Not Enough”, and is now enjoying his moments under the sun for something that is being described as ‘sensational revelations.’ The reason is not because his book has been read and it is a great one. It is because prior to the release of his book, he has preferred to give ‘several exclusive’ interviews to television channels, and ‘expose’ the Congress president Sonia Gandhi.

We shall get to know the details of the book only when it is released, but in his interviews, Natwar Singh has made it clear that the book was originally planned to be some 600 pages and has now been reduced to about 400 pages. He has also accepted that the preface and the epilogue to the book has been written after the May 2014 election results were known. He has also disclosed that on May 7, Sonia Gandhi and her daughter Priyanka had come to him with a request that he should drop the portions related to the ‘prime ministership’ issue of 2004. Now, he has not dropped the portions and has been reaping headlines on the basis of that disclosure, that when Sonia Gandhi gave up the prime ministership in 2004, it was not due to her inner voice, but because her son Rahul was scared that like his father Rajiv and grandmother Indira Gandhi, she too would be killed. In a nutshell, the charge is that fear has been projected as sacrifice, and façade of greatness has been created.

Till 1984, Natwar Singh was an IFS officer and he resigned from service to contest the Lok Sabha elections after the assassination of Indira Gandhi. He later became a minister of state in Rajiv Gandhi’s government. After that he was appointed minister for external affairs in 2004 in the UPA-1 government but had to resign after corruption charges against him were found correct by two independent agencies — one appointed by the United Nations, and the other by the Government of India. So, in 2005, he had to quit and was also removed from the Congress Working Committee and later went out of the party. Though his post 2005 actions cannot give him that status, he has always billed himself as a loyalist of the Nehru-Gandhi family. It was in this capacity that he was privy to the background details which led to Sonia Gandhi’s decision to give up prime ministership.

Cutting through all the flab, it comes clear that Natwar Singh’s disclosure in 2014 after the defeat of the Congress party, is surely an act of betrayal of the erstwhile confidence, aimed at extracting revenge against the Congress president. He has also argued that a part of her is not Indian, and none of the Indians among the Gandhi family –Nehru, Indira and Rajiv– would have penalised him for his corrupt acts. This is an offensive line of argument on two grounds. The first and the most important principle of public and private life is that confidences do not come with an expiry date. While writing an autobiography, any person is at liberty to present his side of the story. But then if betraying confidences due to a subsequent change in the texture of relationship were to become the order of the day, then there would be no sanctity left for private moments.

The second is a grave violation of our ancient civilisation construct that assimilates all of our ‘bahus’ or daughters-in-law. Singh displays a flawed anti-women mindset when he charges that Sonia Gandhi acted against him because a part of her still remains an Italian. This also betrays an attitude which treats bahus as outsiders in a family, even when they have spent a lifetime remaining completely absorbed in the family of the households into which they have been married into. In his anger, he forgets that his acts were indefensible and his exit from the government and the party had nothing to do with Sonia Gandhi being Italy-born. He also forgets that he is not the only UPA minister who had quit because of corruption charges.

In so far as the disclosure about the prime ministership is concerned, it is meaningless nugget for the talk-shops and gossip houses of the capital. The bottom line in this will always remain that Sonia Gandhi did not accept the prime minister’s post when she could have easily got it. Ask those who have tried and failed several times to lay their hands on this coveted chair, and then you get to know a measure of her sacrifice. Well, as a son Rahul should be concerned for his mother, and let us accept this is not fear. The almost pathological hatred for the Gandhis in a section of the society is quite evident by the venom that is poured on them on the internet and the social media.

But there is little doubt about the courage and fortitude that has been shown by Sonia Gandhi all through these years. As a civil servant-turned-politician Natwar Singh is not an ordinary man who is engaged in a street brawl. He is a man of letters, and is not new to the art of autobiography. He is a diplomat by training, and knows the subtle art of delivering tough messages without being offensive. Yet he has used harsh epithets for the Congress president without any justification. Moreover in writing his autobiography in such a revengeful tone, he has proved himself to be a less than an honourable man.

He has compounded this folly, by giving interviews from his self-assumed perch of high moral ground when he claims that he has not “written this book with any vengeance, malice or bitterness otherwise I would go down in my own esteem.” Now pray if Sonia Gandhi’s ‘renunciation” was fake and such a serious issue as he now tells us, then what prevented him for going public at the moment itself? Did he not keep quiet at that time as he was angling for a ministerial berth? Even now he has come out with the book only after the Congress has lost the elections. If the Congress had won, I am sure that he would have deleted these portions from his autobiography. 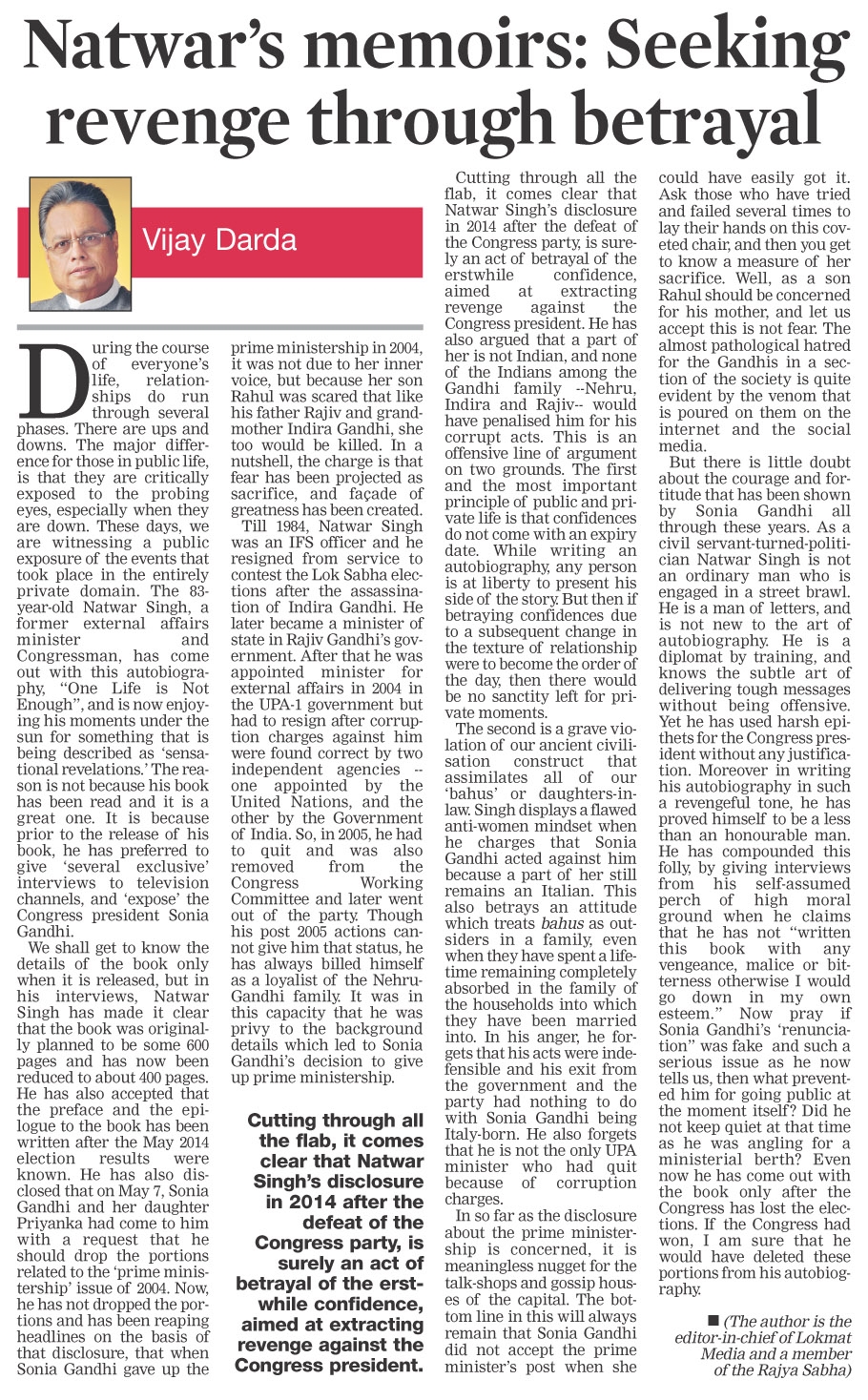