Tight security became a part of our life after 9/11 and 26/11; health and hygiene will top our priority now

Time changes everything, goes a very old adage. But history stands an eloquent testimony to the fact that some drastic event alone changes the world or the world itself feels compelled to change. Whether the progenitor of these events is man or nature, the fact remains that the priorities and requirements of life change in their aftermath. New areas begin to develop. So, the life after the conquest of coronavirus is going to change a lot; just like after 9/11 and 26/11, many drastic changes have come about in the world.

Prior to the apocalyptic event of September 11, 2001, there used to be no such stringent security arrangements at any airport anywhere in the world as they are today. Neither were state-of-the-art machines used for security check, nor long queues formed for checking. But the 9/11 incident changed the aviation system of not only America but the entire world. Immediately after the attack, America focussed itself on the fact that no such security breach should recur and for this, the Transportation Security Administration was established. More stringent new rules of security were laid down. The entire world followed them.

Other than America, Israel, Russia, France and China have made impressive progress in this field. Now the machine detects what is in your bag or what is hidden by someone in their body at the airport during air travel. So much so that if someone carries some paste or any other liquid instead of ink in fountain pen, the bag containing it is separated automatically during security check. The aircraft of many countries are so advanced that they defuse lightning bolt before it strikes. Some aircraft even foil missile attack.

The impact of 9/11 was such that within 24 hours, big companies made whatever security arrangements they could. After that, there was a boom of security industry in America and it is thriving by leaps and bounds. The growth rate of the security industry had been more than 2.5 per cent between 2015 and 2019.

Now let’s talk about India. The terrorist attack in Mumbai on November 26, 2008 made us realise that tight internal security should be our top priority. Our intelligence system should be very strong and efficient. The need for evolving and installing a security system that could monitor the visitors in public places was badly felt. After this, our country undertook the task of bringing public places under surveillance by installing closed-circuit television cameras. With better resolution cameras and other security equipment, new companies entered the market. Today, the industry is in full boom. The growth rate is between 20 and 25 per cent. 20 lakh cameras are being sold every month. The security and surveillance market in India in 2017 was worth Rs 8,200 crore. It grew to Rs 11,000 crore in 2018 and it is expected that this year it will grow to Rs 20,000 crore. China has done tremendous work in security domain. There are cameras installed everywhere in that country. They track every person through face detection technology.

To sum up, our world will change once again after we declare victory over the virus that has ravaged the world. India will change more in accordance with its needs. Healthcare and hygiene will be our biggest priorities. Unfortunately, healthcare and hygiene have not been priority for years in India. You will be surprised to know that in 2018 only 1.28 per cent of the total GDP was spent on healthcare in our country. Earlier, this figure was only around 1 per cent. Let me tell you that a developed country like America still spends 4.6 per cent of its GDP, which is many times more than ours, on healthcare.

The way Covid-19 has created an atmosphere of fear as regards healthcare, it should be expected that in our country too, health services will become better and affordable to common man. The condition of government hospitals will improve. The kind of cleanliness that is maintained in the ICU will be maintained in the rest of hospital too. While Prime Minister Narendra Modi and state governments have already pitched for cleanliness, the common man will also proactively become an ally in ensuring hygiene everywhere. It is no rocket science to guess that there will be a heightened awareness about private and public sanitation.

The trend of handwashing has just caught on; it will become a permanent facet of our private and public life. The government will issue new guidelines on healthcare like how to keep your residence and office sanitized, what precautions to be taken to preserve health, among other things. The healthcare and hygiene sector will see a big boom. The consumption of soap, sanitizer, mask and some medicines will increase manifold.

Much more will change post-coronavirus. The very nature of our kitchen and catering services will change. Hygiene will be supreme. People will be more attracted towards yoga and exercise. The nature of educational institutions will change too. Our country will also move towards online education. The way of air travel will change. The practice of wearing masks will increase. And yes, certain things will completely disappear from our lives. People will hardly shake hands with each other now. They will hug only someone who is very close! Salaam, Namaste will become etiquette!

Some epoch-making incidents have changed the course of history. We have seen the world change after 9/11 and 26/11. Life’s priorities have undergone a sea change since then. Cleanliness, health, hygiene and better immune system will definitely be our top priorities after the victory over coronavirus. 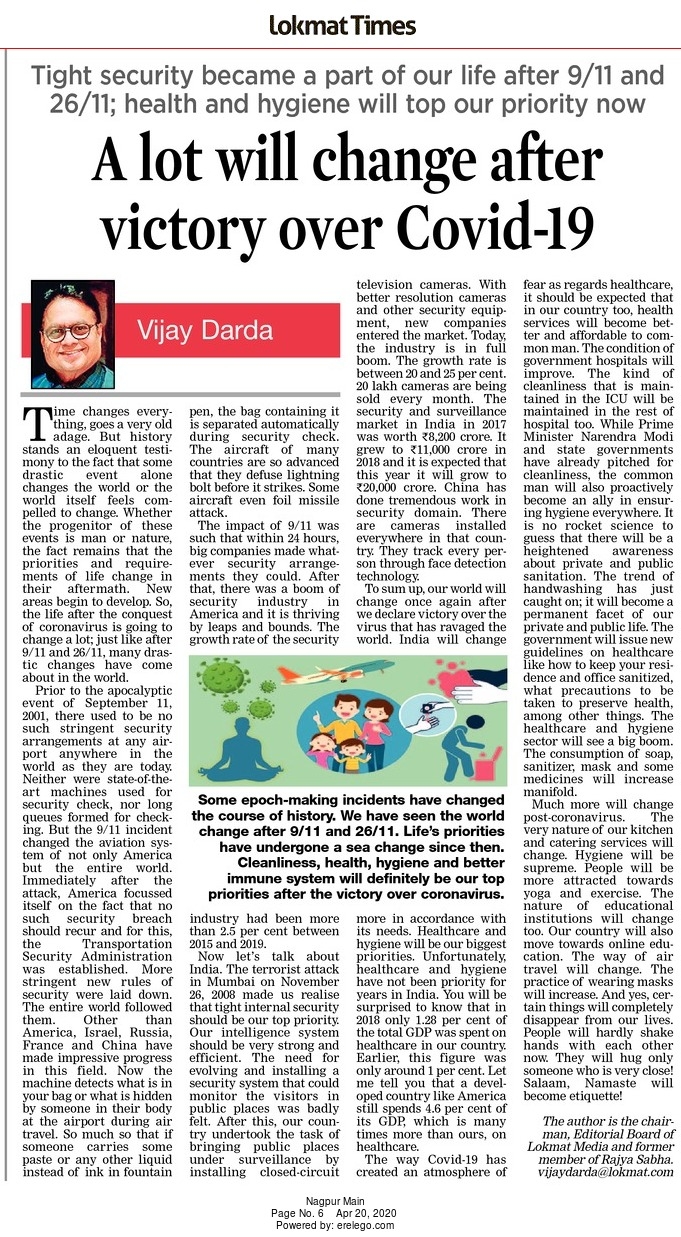 Politics before security: The NCTC debate