There is a huge paradox about doctors and hospitals in our world. In the event of a medical crisis, that invariably falls indiscriminately on every citizen at various points of time in every one’s life, they are only people and places we rush to. If a life is saved, and the pain and the crisis averted, then it is seen as nothing short of a miracle. The doctors are treated like gods, and given that status in social life. However, as it also happens in everyone’s life, there comes a time when this system fails to respond. Then we all have to come to a conclusion that the entire system merely represents the pretence of helping the sick.

The stories emanating from the national capital about the healthcare crisis dominating the city in the wake of the dengue epidemic are heart rending to say the least. When the parents of a child have to commit suicide as the death came hunting for their loved one simply because no hospital had a bed for the sick young child, then it is the pits for any healthcare service. But when this is not just an isolated case, and the number of such children keeps growing, it is time to realise that the extent of the failure is staggering. Above all, when this takes place in the national capital, the fate of the poor in the faraway places need not be imagined. It can be said with a great amount of certainty that the situation is going to be worse than this.

So what ails our healthcare system? Especially when we have the government talking of medical tourism and some private hospitals aggressively marketing their facilities as the best in world to woo patients from abroad. Let us not forget to appreciate that even in this atmosphere of overall depression around healthcare some of our doctors really provide world class treatment of their patients who make a beeline to seek their appointment from foreign countries. But it is this paradox that should engage the attention of our planners, policy makers and healthcare givers.

For starters, it is our low spending on healthcare that is at the root of this crisis. At about 4 per cent of the GDP, that is less than half the average of 9.3 per cent among countries that are members of the OECD (Organisation for Economic Cooperation and Development) and less than one fourth of the 16.3 spent by the United States of America. We are spending an average of 32 dollars per person and this surely is not even peanuts when compared with the OECD average of 3484 dollars. Just this one figure tells the rest of the tale that is symbolised by overcrowding, lack of facilities, and poor treatment quality at our public hospitals.

But there are other shocking comparisons. We have only 0.7 physicians per 1000 population, well below the OECD average of 3.2. Similarly, we have just 1.1 nurse per 1000 population that is much lower than the average of 8.8. With steep income disparities, we also struggle to tackle the “double-burden” of diseases which include infectious diseases affecting the poor on the one hand and chronic lifestyle ailments typical of fast urbanisation on the other. Both these are a severe drain on our economic strengths and have consequences that go beyond the health of the suffering individual.

We must internalise the reality that improvement in healthcare would not come through the private sector. It should flourish by all means, and those who can afford such treatment are welcome to avail of that service. But if the state has to discharge its responsibility towards the citizens by providing healthcare, then the government hospitals have to improve. There is no alternative to this route. The expectation that government facilities like land etc for private sector hospitals on concessional terms would translate into the facilities being available to the poor has been thoroughly belied. This provision comes for attention more when it is violated rather than in terms of its adherence. Even before this flawed experience, I have long been of the opinion that any improvement will come about only when the recent judgement of the Allahabad High Court directing all government servants, elected representatives, members of judiciary and any other persons who get any benefit or salary from the state exchequer or public fund to send their children to primary schools run by the state education board is followed in letter and spirit. For whatever is applicable to government run primary schools is ditto for government hospitals. Unless the categories mentioned in the court order patronise the government run schools and hospitals and develop a personal interest in improving the quality we would remain condemned to that inefficient and horrifying spectacle that our schools and hospitals present to us. Till then these meagre facilities would continue to languish and also become inevitable dens of corruption.

No one is naïve enough to believe that things would dramatically improve overnight merely cause of this change. But then there would be a qualitative difference. The monumental bureaucratic and official indifference that makes the present government run education and healthcare facilities sick would be replaced by the concern for their loved ones. Instead of believing that other persons’ kin and children are suffering and there would be a time for correcting the wrongs, the powers that be would be scared that may be their loved ones are suffering irreparable harm due to their neglect of their responsibilities.

There are other areas of neglect as well. There is the chronic shortage of doctors and the problem of overcrowding is experienced even at the costly private sector hospitals. Then there is the issue of research in the pharma sector. It is the responsibility of the government in the world’s third largest economy to institute proper funding mechanisms in all these areas, and also to put in place a regulatory framework for monitoring the unethical practices in the private sector.

The partisan tone and tenor of our political discourse on healthcare issues and the blame game that is played in the political arena is not going to help us in getting rid of this healthcare crisis. If ever there was need for cooperation between political parties and the state and central governments in any particular field, then this is one sector that is literally crying out for such attention. Perhaps, out of the dark clouds of this dengue crisis, there would be silver lining of all party cooperation.

A word of congratulations to our brilliant tennis stars – Leander Paes and Sania Mirza. Once again the two have combined with the same Swiss Miss Martina Hingis to repeat their Wimbledon success and combined with her to win another grand slam – this time the US Open. Such successes are an inspiration for others to achieve greater heights. 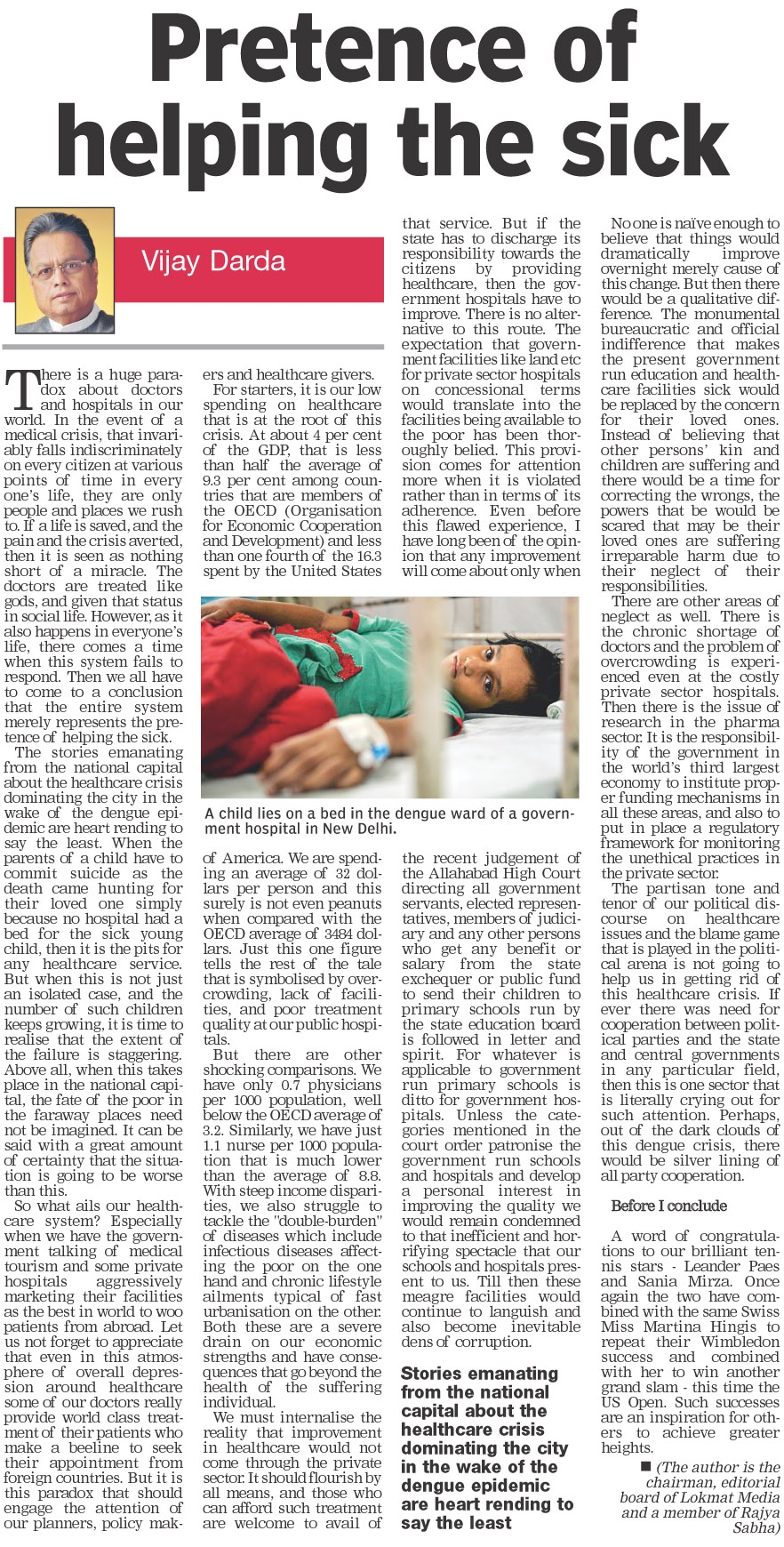