Distressed by Covid-19 pandemic, the world is furious with China and many companies want to leave the country now!

There is always light at the end of the tunnel, goes the old adage. And the whole world is expecting the same in these tough times. Tomorrow holds a big hope for us if we are ready to take advantage of this opportunity.

The whole world is angry with China over the spread of Covid-19. A big news, in the meantime, flashed that about 1000 companies intend to move out of China and set foot in India. Of them, 300 companies have already started negotiations with the Indian government. If we are able to bring these companies to India, our economy will not only improve, we will also be able to earn an eminence in the world as a big economic power. In the 17th century, India was the greatest economic power in the world. We can regain the same status now!

Japanese and Australian companies have already expressed their wish to leave China. Japan is also ready to give a big economic package to such companies. It is obvious that India is a better option for companies leaving China. There is also an atmosphere of trust across the world in the leadership of Narendra Modi given the kind of fight India has put up against coronavirus. If he invites the companies to India, they will definitely come. The best part is that we neither have shortage of raw materials nor lack resources or workforce. We are also a huge market for the world. This is exactly what companies want!

But to attract these companies, India needs to take some necessary steps. The first thing is to ensure ease of doing business (EoDB)! According to the World Bank report, we are at 63rd position in EoDB. We should aspire to be among the first 10 countries. Despite dictatorial leftist rule, China is ranked 31st. Small countries are far above us in the ranking. We will have to bring about radical changes in government functioning if we want to move up the ladder. The first thing will be to change the labour laws and make them industry-friendly.

Land allotment process will have to be simplified, uninterrupted and quality power supply will have to be ensured, security arrangements will have to be made, corruption will have to be curbed and more freedom will have to be given to the banks to function well. Right now, they fear being haunted by the investigating agencies (banks do not trust the assurances doled out in this regard). Industries will be attracted only when we make all these arrangements and convince them that all this is lasting. In case of telecom, the industry has realised that the facilities promised were not provided, which is not good. We have to understand that industries alone can generate employment.

I had raised the issue in Parliament that it was due to our policies that we fell behind in the hardware sector and China took advantage due to its policies. When we can establish our supremacy in the world in terms of software, we have the ability to do so in hardware too but policies do not support us, and therefore, we have lagged behind.

This is even a bigger opportunity for Maharashtra. Most of the big industrialists are in Maharashtra. Mukesh Ambani, Tata group, Anand Mahindra, Kumar Mangalam Birla, Sachin Jindal, Unilever’s Sanjiv Mehta, Bajaj group, Gautam Singhania, finance sector wizards Deepak Parekh and Uday Kotak are prominent among them. There are many more names whose potential can be tapped into. Our chief minister Uddhav Thackeray has good relationship with all of them. He should take along finance minister and industries minister to build such a pool of resource persons that should focus only on bringing maximum industrial investments into Maharashtra.

Uddhavji should also include Union minister Nitin Gadkari, former chief ministers Devendra Fadnavis, Prithviraj Chavan and Ashok Chavan, and former Union minister and industrialist Praful Patel in this task. Uddhavji holds talks with Prime Minister Narendra Modi every other day. He will also get support at the Central level. Naturally, in this case all leaders will work above politics. After all, who does not want to develop their state?

Uddhavji also has a team of very competent officers. We have a dedicated chief secretary Ajoy Mehta and his entire competent team. In particular, I would like to speak about principal secretary (industries) B Venugopal Reddy and development commissioner (industries) Harshdeep Kamble. I have seen B Venugopal Reddy work from very close quarters when he was divisional commissioner in Nagpur and Harshdeep Kamble as the district collector in Yavatmal. I can say that they have immense potential.

The positive aspect of Maharashtra is that there is a strong team of qualified and dedicated officers here. If industries are to be attracted, chief minister Uddhav Thackeray will have to be proactive and make effective the single-window system for industries, only then can success be achieved. How can we forget the departure of Cia Motors and Maruti from Maharashtra. We should invite such industries to set up their plants here.

I think that currently the world badly needs personal protective equipment (PPE), masks and sanitizers on a large scale. We can identify at least 50 such products. By producing them in Maharashtra, we can meet the needs of the country and supply it to the world too. What is needed is the strong will power. It will also benefit in foreign capital investment because when companies come to India, they will definitely see which state in India is more better for them. We should not miss the opportunity.

It’s a time of crisis no doubt, but I also see it as an opportunity. Actually, the Covid-19 crisis has created much resentment against China and many companies have made up their mind to leave the country. If India manages to attract them, the current crisis can be turned into a big opportunity. 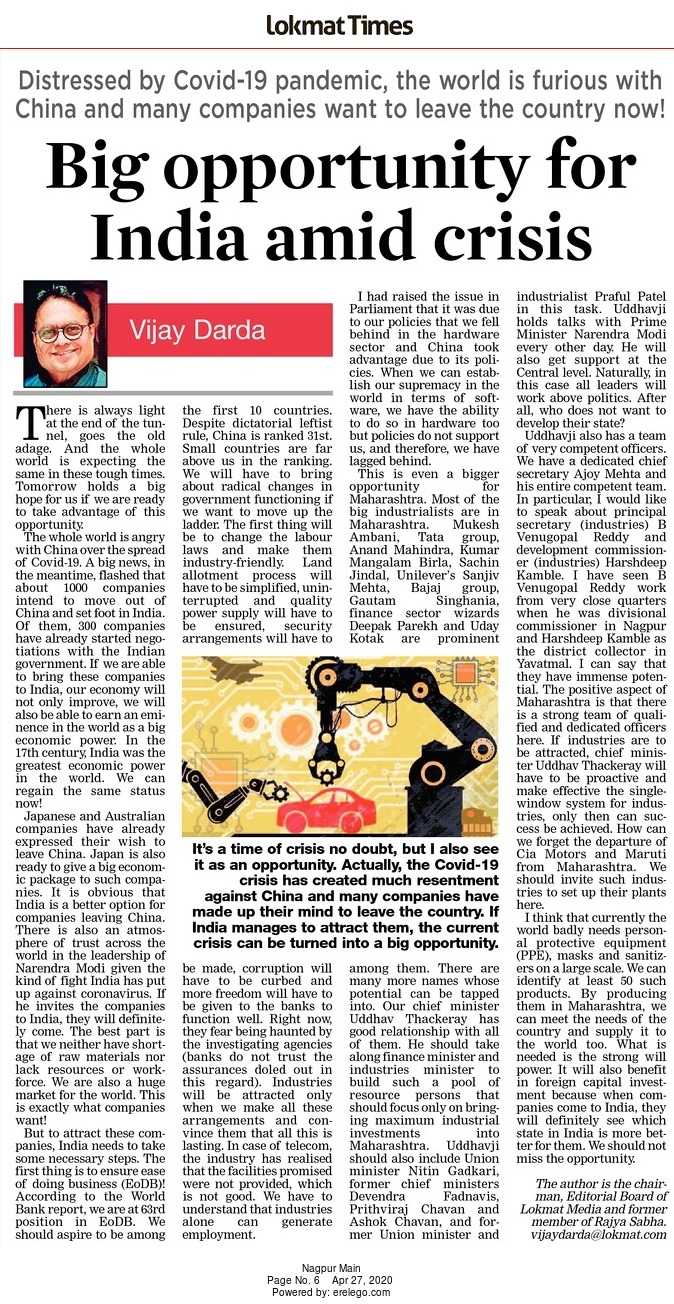 A new era of opportunities and challenges