Politics before security: The NCTC debate

In our country the multi-faceted forces of terrorism  regularly serve reminders of the grim consequences of  their acts. The security forces do fight the challenge bravely, but then the brutality and the escalating scale of violence is such that it does not allow the public mind to have any feeling of safety. We are often accused of being a soft state. This is not because the security forces are weak-kneed. This is because we have exhibited a lack of collective political will to overcome this hurdle to our national security. We have been remarkably sluggish and inefficient in evolving mechanisms that could equip us better to fight this menace.

Last week’s chief ministers’ conference on internal security once again proved that for several chief ministers politics come first and security of the people is something that can wait. It is shocking that the chief ministers talk of federalism, when the basic issue is the security of the people. The states are more conscious of their policing rights and less worried about the fact that law and order being a state subject under the Constitution, the buck for the safety of the people really stops at them. Or else why would Gujarat chief minister Narendra Modi refer to the five-year-old proposal to set up a National Counter Terrorism Centre (NCTC) as an act of political opportunism on the one hand and demand that there should be a separate strong law for fighting terrorism?

But then Modi is not alone in opposing NCTC. He is in the august company of several non-Congress chief ministers for whom politics comes before the security of the people. All of them bring in the elements of their state and personal politics to sharpen the controversy over the subject, instead of trying to minimise the areas of differences so that a unified approach could be worked out. It appears that for them this is yet another tool in their persistent Congress and Centre-bashing exercise. Now, this may be quite a legitimate political exercise in the normal sense, but the question that begs an answer is should this be followed when the primary aim is to protect the lives of the innocent people?

We all know that whether it is cross-broader terrorism or the right-wing religious terrorism or for that matter the left wing extremism, the best way to fight it is before the actual attack occurs. The old worn out cliche — prevention is better than the cure — may sound too simplistic and thus unimpressive, but then let us face it, this is the only answer. The consequences of failing to prevent a terrorist attack are death and destruction. Then the only course of action left is condolences and commiseration.

There is no debating the aspect that the root cause of terrorism should be addressed, but it should always be remembered that this is always a long drawn process. Moreover, it is imperative that whatever be the ideological under-pinnings of the acts of terror the first and foremost thing is to look at these as crimes and so prevent and tackle them as such.

In the context of the proposed NCTC, the contentious issue has been the encroachment of the Centre on the police powers of the states. Firstly, the states opposed the idea of locating the NCTC within the Intelligence Bureau, and they also did not want that it should conduct arrest and seizure operations without the prior involvement of the state. But the opposition continues even now after these features have been changed, and the director generals of police of the states have been made a part of the proposed Standing Council. Indeed, the Union finance minister P Chidambaram who has worked out the details of the project in his previous avatar as the home minister is not off the mark when he says that the country will have to pay a price for this politicking, after these changes have been made.

As a member of the Rajya Sabha — the council of states, I am all for supporting the rights of the states. I do not want that there should be any curtailment of the rights, powers and entitlements of the states. But then I also want that there should be nothing that affects our national preparedness to fight terror. I strongly believe that without a national centre that collects, collates and analyses data inputs in real time, we shall always remain crippled in our fight against terror.

There is simply no point in paying lip service to the idea of the Centre and states fighting the challenge jointly, and then indulging in tactics that undercut the national preparedness. The information and technology part of this challenge is an activity that requires material and human resources that are simply beyond the scope and ability of the states —specially the smaller ones like J&K, the north-eastern states, and the areas like Jharkhand and Chhattisgarh cannot put in place the technologically advanced and state of the art equipment in call monitoring, and data-mining activities.

I also wish to state that the argument of political misuse of Central investigative or police agencies is also an overblown conclusion. Indeed, this is an argument that smacks of political opportunism. In Congress-ruled states, the reflex action of political parties is to demand a CBI inquiry when any high profile incident occurs and they suspect that the state police would not be impartial. Indeed, whenever an independent inquiry is felt necessary, then the demand is for the CBI to be brought in. Besides, as Chidambaram observed there was an opposition to the National Investigative Agency as well, but now the same states want that this agency should be brought in when there are complex crimes.

Competitive and partisan politics makes our democracy vibrant. There should be no letup in this, and this game must be played to the fullest. But the kind of debilitating impact it is having on various aspects of our national endeavour makes me wonder as to whether or not we are indulging in too much of it. This thought also crosses my mind when the parliament is obstructed and the opportunity to enact laws that would enable and empower the people is lost. We all take pride in being argumentative Indians, but let us not lose sight of the collective national interest. A NCTC, developed and empowered with the best technical resources, is the need of the hour. Let us not sacrifice it at the altar of partisan politics. 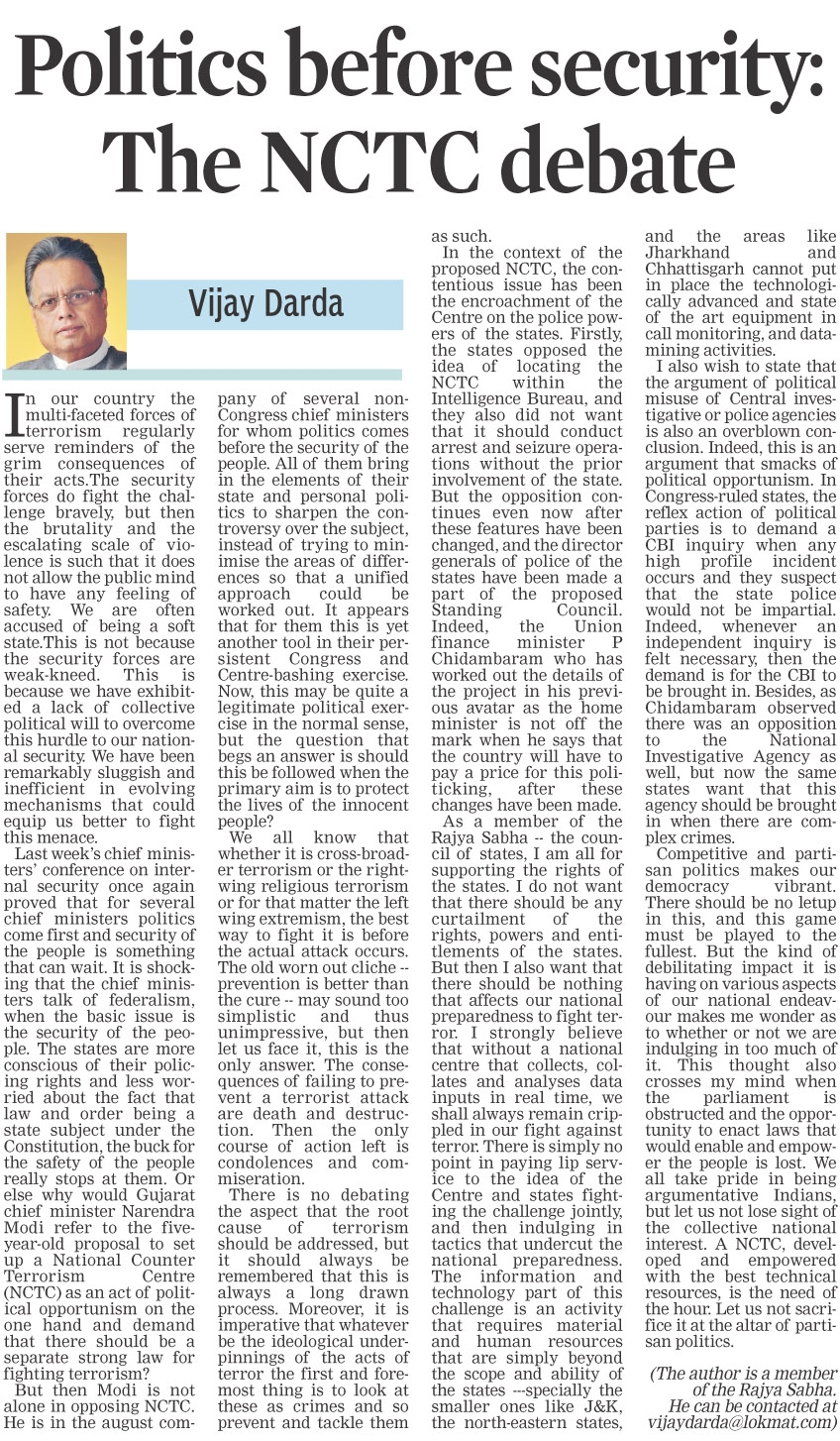