It would be quite apt to say that Anna Hazare has only flattered to deceive the common masses of the country. Just about a year ago when he catapulted on the national stage as the shining white knight who promised to rescue the masses from the devil of all-pervading corruption Hazare generated a lot of hope and hype. Now a year after the hope has withered and the hype has all but dissipated. The movement too has lost its lustre. Its leading lights do not shine as brightly as they did at the start.

Even the leadership does not belong to Hazare. On the contrary, he has yielded that spot to the saffron-clad yoga guru, whose credentials are questionable to say the least. Indeed, the change from Hazare being the top boss, to Baba Ramdev becoming the prima donna and making the rounds of all the top political leaders by itself tells the sorry tale of the movement. After all, the civil society had got a disproportionate weightage in the scheme of things only because it excluded the usual politicians and the apolitical nature of this campaign was its most significant redeeming virtue.

Let there be no mistake, the country needs deliverance from corruption, the only question is who can provide it? Can the Jan Lokpal demanded by Hazare who shall be accountable to none, and placed above all democratic institutions be the remedy? We now know that it is beyond the talents and capacities of the Hazare-Ramdev combine to come up with a format that could convince the rest that their model is the best workable solution. It is one thing to keep talking about corruption and black money and quite another to find a solution that would effectively tackle these twin problems. One can surely keep grabbing media headlines by making wild allegations against ministers, and also keep dishing out new astronomical sums about black money stashed abroad, and quite another to get even a penny of that money back into the country. We must all realise that Hazare and his friends can surely grab media headlines, but in the last one year, beyond criticising the government they have hardly come up with one formula that could tackle the problem in any meaningful way.

When it comes to moral issues, one must always remember the sacred Biblical principle that he who is not a sinner shall cast the first stone. In short, when you lead a campaign against corruption, you must come to it with clean hands. It is disappointing to say the least that the leading lights of the Hazare group have failed on this test. Not just that, the manner in which the affairs of the campaign have been conducted has also added to the element of doubts about the purity of their means. The argument that all is fair in love and war, and as this is war against corruption, such issues are redundant simply does not hold water in this case.

During the period of more than year, the campaign has also revealed its political bias. There have been strong protests from Hazare when senior Congress leaders like Digvijay Singh have talked about the campaign’s Sangh connections. He has been vigorously asserting that he does not even know the RSS chief Mohan Bhagwat. But then actions always speak louder than words. The sight of Nitin Gadkari touching Ramdev’s feet (although the BJP president is elder to the yoga guru) said all that needs to be said about the Sangh connection with this campaign. Besides, the campaign has been eloquently silent on all the reports of the Comptroller and Auditor General regarding the instances of irregularities and corruption in the non-Congress ruled states.

It has to be asserted that the campaign assumed a larger-than-life role because of the well-intentioned follies of the government. In hindsight it can be pointed out that the government erred seriously by engaging itself in a dialogue with these false gods of anti-corruption. There were a series of avoidable blunders like setting up a joint drafting committee with Hazare’s friends, and even if it had to be done, then not making it broad based to make it an all-party affair, engaging with Ramdev in a dialogue when he was on the stage fasting at Ramlila maidan. There is a much more mature and seasoned way of handling such agitations, and the government unfortunately did not exhibit the desired maturity. The same thing was reflected when four Union ministers, including Pranab Mukherjee, Kapil Sibal and Subodh Kant Sahay were deputed to meet Baba Ramdev at the New Delhi airport.

But this mishandling by the government has also revealed the political agenda of the campaign. Even though its professed objective may be to fight corruption, but it has clearly emerged that its core agenda is to embarrass the UPA government and the Congress party. The fact that it can openly ally itself with the descendants of Bhajan Lal who is a synonym for political opportunism and en masse defections speaks volumes of its political agenda.

It would be tempting to say that this is an opportunity lost. But one must resist that temptation, and congratulate the political class. In spite of all its internal divisions, the political class has seen through the subversive agenda of this campaign and come up with an effective response. It has accepted the need for a Lokpal, and is seriously mulling over the details of the bill. After all, if our predecessors in Parliament have not passed the law over several decades, then there should be some valid concerns. It is too simplistic to argue that merely because the political class lends itself to the charge of being corrupt, it has thwarted this bill. I have consistently maintained that the proposed Lokpal is a remedy worse than the malady. We do need to fight corruption, but then the Lokpal proposed by Hazare and his friends is not the way out.

I also have a hope from the media. I feel that during the course of the year that has gone by, the media too would have learned a lesson that propping up false gods is counter-productive in the long run. So, the next time, someone promises to be the next Gandhi, the media would also not get carried away by the lure of an impending revolution. It would wait and watch like an intelligent bystander, and not become an enthusiastic flag waving participant, and don the distorted Gandhi cap. 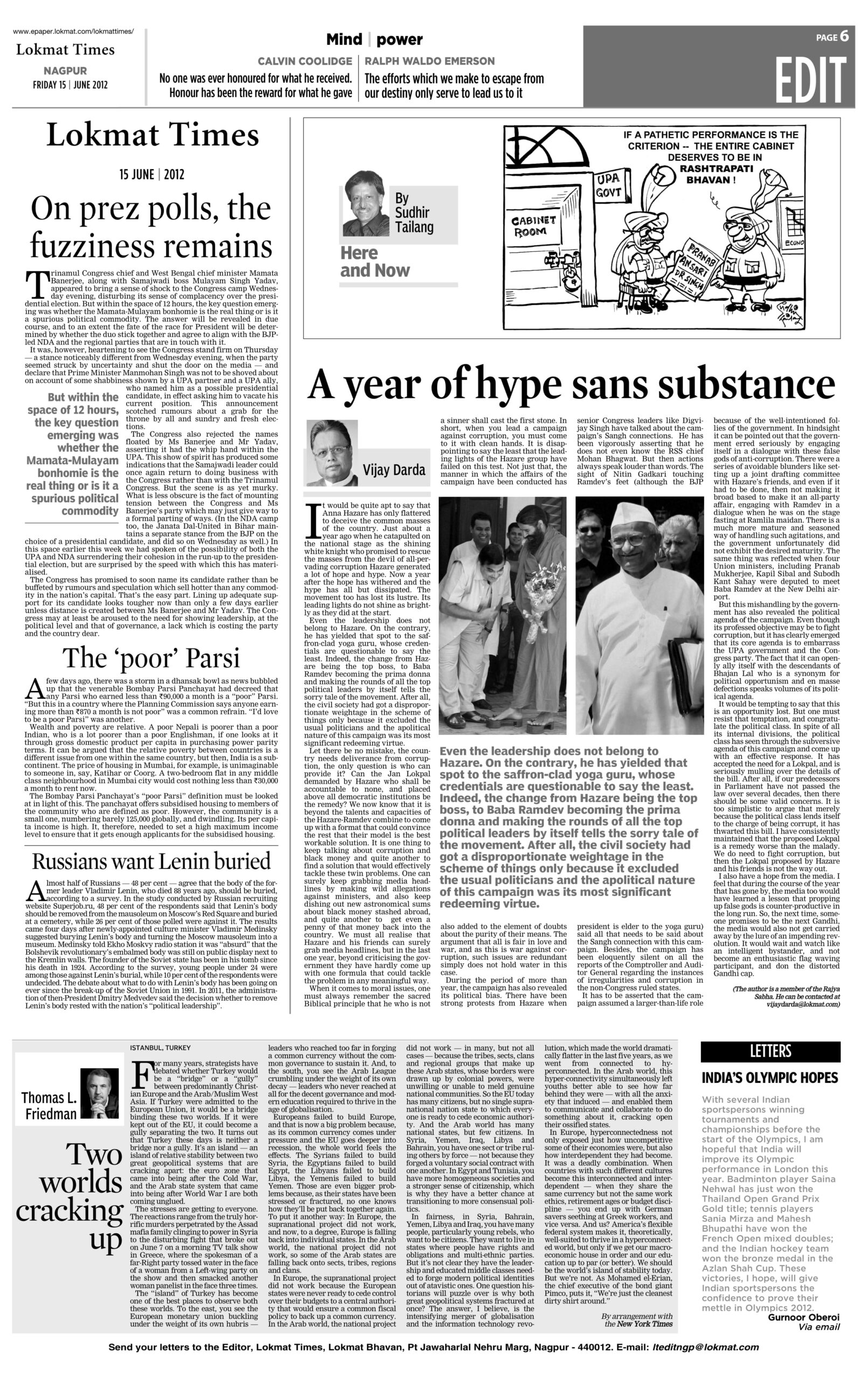