Citizens of 83 countries are still slaves!

We are lucky to be born in a free country. Ask about the value of freedom to the people living under dictatorship

I hope we haven’t forgotten China’s business mogul Jack Ma, who until a year and a half back was a big name in the world. At the time, his fortune was estimated at around USD 2,370 crore. Jack Ma is missing today. He was last seen in public in November 2020. There are rumours that he was seen in Hong Kong in 2021, but the claims have not been confirmed.

You must be wondering why I am talking about Jack Ma on the occasion of the diamond jubilee of India’s independence. In fact, this is a glaring example of stifling liberty by those in power. Actually, Jack Ma has been trapped by the Chinese government. He was growing unbridled in wealth and power. And wherever there is a dictatorship, no one is allowed to become stronger except for those in power. Even prominent businessmen like Jack Ma are not spared as those in power are always afraid of such people. If Jack Ma could suffer such a sad fate, can you imagine what the state of the common man out there would be like? About 10,000 Muslims have been put in prisons called correctional institutions in the name of new education in Xinjiang province. There are no mosques, no churches, no temples! China also destroyed pious Tibet. China is now trying to annex Taiwan as well.

This story is not unique to China. There are about 83 countries across the world where dictators are in power directly or in the name of religion. Before the arrival of Vladimir Putin, there used to be many big industrialists in Russia, but today there is no trace of them. All stand devastated. Everyone is familiar with the situation in Iran and the Middle East. In Pakistan, there is democracy for name’s sake but the real power lies with the military. Last year, you saw how the army seized power in Myanmar. It’s anybody’s guess as to how many people were killed by the Myanmar army. You already know the stories of the coup in Pakistan. We are witnessing the deteriorating situation in Sri Lanka. I had also written about the dictatorship of the Rajapaksa family in Sri Lanka in these columns. The painful story of North Korea keeps filtering out as to how a cynical dictator Kim Jong-un has enslaved millions of people. People just exist there. They can’t even sport their favourite hairstyle! If they do not display picture of the dictator in their homes, capital punishment is a certainty. In sharp contrast, the neighbouring democratic South Korea is progressing fast. And if there are dictators in some African countries, the fanatics opposing them are no less than the dictators themselves.

I am telling these stories to you so that you can understand the meaning and importance of freedom. We should bow to our ancestors who did not even care for their lives so that we could breathe freely. I always say that my Diwali is Mahatma Gandhi, my Holi is Pandit Nehru, and Subhas Chandra Bose, Bhagat Singh and thousands of revolutionaries like them reside in my heart. I have faith in Lord Mahavir and Gautam Buddha. I have the spirit of Chhatrapati Shivaji Maharaj because I was born in the family of a freedom fighter. My Babuji, veteran freedom fighter Shri Jawaharlal Darda, was also imprisoned in Jabalpur jail for about one year and nine months. He suffered the torture of the Britishers for the sake of freedom.

So if we are immersed in the celebration of 75 years of India’s independence today, it is only because of the non-violent struggle of Mahatma Gandhi and the sacrifice of many great revolutionaries. It is not known how many mothers lost their sons, how many women lost their husbands and how many sisters kept waiting in vain for their brothers to return home. The country had to make a lot of sacrifices to attain this freedom. People of every community, sect, religion and caste have made sacrifices. Countless people were imprisoned in the British jails for years. A long period of 75 years has passed since independence. The generation of freedom fighters has almost passed away. The third generation after independence has now taken over the command. Social feelings have weakened a little, relationships and associations have taken a beating and the bond of love has become weak too, but I feel proud that the feeling of patriotism continues to grow. I am thankful to Prime Minister Shri Narendra Modi who made the Azadi Ka Amrit Mahotsav such a grand affair and launched the ‘Har Ghar Tiranga’ campaign. I have consistently tried in the Rajya Sabha to get the common man the right to hoist the tricolour every day. Getting this right is like giving more scope for freedom. We have to maintain the glory of the tricolour which has been handed over to us by our freedom fighters. So, let us make ourselves proud by hoisting the tricolour every day. I returned last month after meeting the soldiers of the Indian Army stationed on the border in the difficult valleys of Kashmir. The tricolour is our identity. There, I was humming Kaifi Azmi’s song: Ab tumhare hawale watan sathiyo..!

I would like to say one more thing; though we have made a lot of progress, even today there are people who do not get two square meals a day. Many are still looking for employment. The sad sight of a man or a woman carrying the body of their loved ones on their shoulders or bicycles is seen. Sisters and daughters are still becoming victims of cruelty. Tribal communities still have a long way to go. We have to get rid of all these social ills. We cannot depend on the government alone to achieve this goal. Along with the government, we too have to work with all our strength so that we can share the fruits of freedom with the weak and enjoy the true freedom ourselves. It is only then that we will be able to say even more happily… Saare Jahan Se Achha, Hindustan Hamara! Jai Hind! 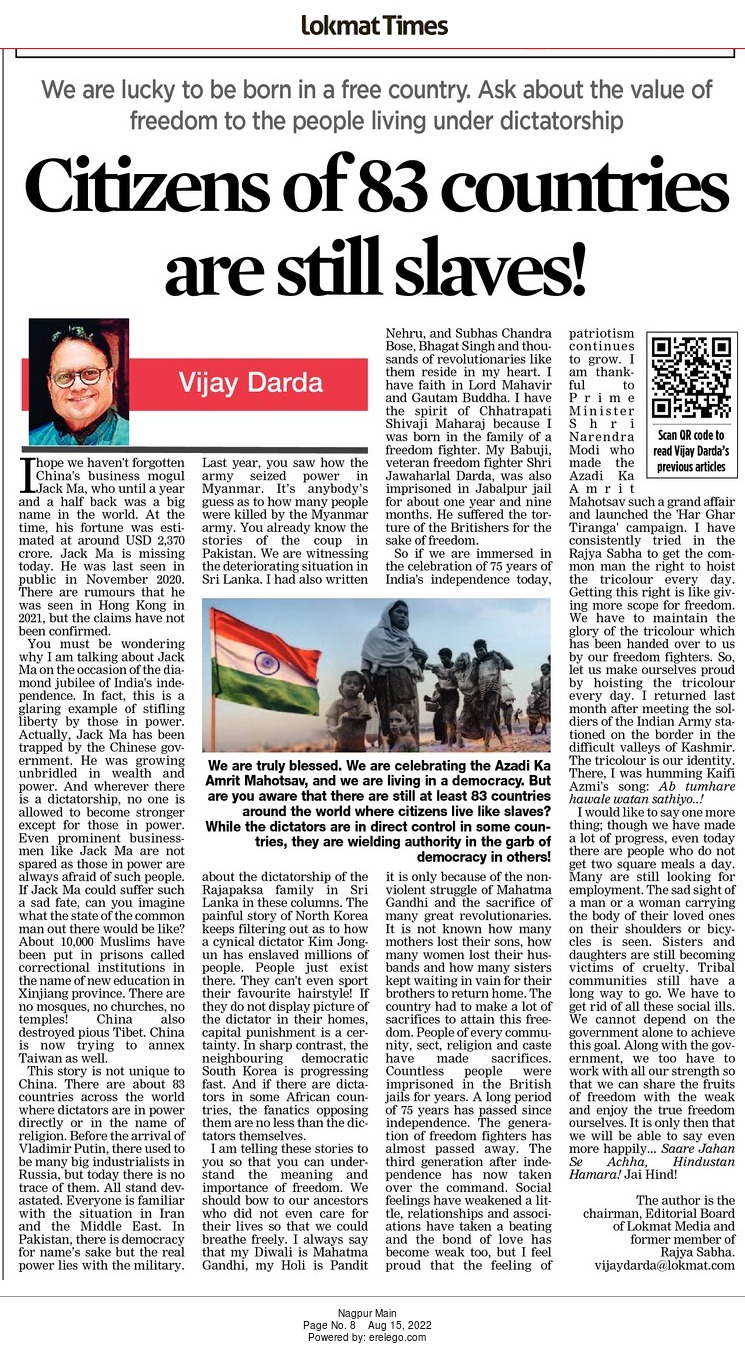 I will hoist tricolour or come wrapped in it

Spirit of freedom should run through our veins