Don’t crush love in the name of religion

Lord Shiva drank poison to save the universe, but today poison is being spread in the name of religion

I am deeply perplexed over two incidents. One incident is from Hyderabad where a Hindu boy Nagaraju married his best friend Sultana. The girl’s family and community could not tolerate this and Nagaraju was murdered. The second incident took place a thousand kilometers away in Gujarat, where a Hindu family was performing pooja using loudspeaker. The Hindu neighbour of this family could not bear the loud sound of the loudspeaker and attacked two Hindus while they were performing some religious ceremony.

The first incident was naturally given a communal colour. This is not the first incident of its kind. Many such incidents have happened in the past as well. Whether a Hindu boy marries a Muslim girl or a Muslim boy marries a Hindu girl, both the communities consider it an attack on their religion. The result is horrifying. But here in the second incident, Hindus attacked Hindus! That too over the issue of the sound of loudspeaker during a religious ceremony! If we look at the causes of both the incidents, it is clear that the cause of both the incidents is only one and that is intolerance! I am worried that the country which has tolerance as its founding principle, the country which propagated the idea of ‘Sarve Bhavantu Sukhinah’ and ‘Vasudhaiva Kutumbakam’, the country which has accommodated everyone from Aryans to Shakas and Huns, where everyone from Lord Shri Ram to Lord Buddha, Lord Mahavir, Mahatma Gandhi and Swami Vivekananda gave the message of tolerance, where did so much intolerance come from? Why did people become so cruel to others in a country where the legend of Lord Shiva who drank poison to save the universe is predominant. Be it Gita, Quran-e-Pak, Guru Granth Sahib or Bible, no religion teaches us to be intolerant. Why has the situation become so serious then? It seems to me that those who misuse religion to serve their own interests have created such a vicious circle that our civilised culture has got sucked into its vortex and become its victim. Religion became bigger than the life itself and it became common to kill in the name of religion.

Dr Babasaheb Ambedkar had clearly stated that if social inequality has to be eradicated, harmony will have to be established and if evils are to be removed, we need to encourage love marriages. I would like to tell you that now even the science has proved that love is a natural element. The one who created us has created it. Hormones called dopamine and norepinephrine in our bodies produce love. It is a crying shame that two young persons who liked each other, got married and faced brutal death,  Is love a crime? All those who use religion for selfish interests, who gave them this right? I have interacted with youth of different faiths from time to time. No youth gives preference to such things but in the name of religion, they are instigated. In the film PK about the custodians of religion, Aamir Khan had correctly remarked, “how can a small man from the planet Earth which is a tiny part of the universe created by God, claim to protect God? Stop protecting your God or else this Earth will be left with no man!”

Similarly, is the use of loudspeakers any topic of controversy at all? The topic should be eradicating poverty, providing food, clothes and houses to all, providing healthcare services to all or ensuring employment for everyone. It is not the job of a loudspeaker to trouble people with a hoarse voice. The voice of the poor, farmers, exploited and downtrodden should be raised using loudspeakers! Why are you drowning it in religion? Stop this nonsense about how your loudspeakers are louder than ours? It will lead the country on the wrong path. I am reminded of my childhood. As Azaan would start in the morning, the villagers would get up and begin their day. At that time, nobody had any problem with ‘azaan’. There were 10 or 20 Muslim families in some villages or 100 houses of Muslims somewhere else. Eid and Diwali were celebrated with equal fervour and the whole village would be filled with happiness. All festivals used to be celebrated by people of all communities together! But the atmosphere now has been vitiated so much so that it does not take long for the bigots to shed blood in the name of religion.

The situation has gone from bad to worse. There is a wave of religious fanaticism in the country. As for those who ask why Prime Minister Narendra Modi does not speak anything on such hysteria, let me ask them, is that the only work left for the Prime Minister to do? Should he protect religion or take the country on the path of progress? Do they know which organisation is preparing to create trouble and where? Will any head of the family destroy his house? India’s relations with Muslim countries have strengthened during Modiji’s tenure. Temples have also been built in many Muslim countries.

When someone talks to me about so-called targeting of any religious group, I ask him whether we can ever think of expelling any community from this country? No, we can’t do that at all. Then why can’t we live together with love and respect for each other? Just imagine that if a community is a target, what will be the effect on the scientists, lawyers, industrialists, students and enlightened people of that community? And keep in mind that it is unfair to raise suspicion about any community for the brutal acts of terrorists. Remember, the elder brother always has a greater responsibility.

The energy and strength you are wasting in fighting in the name of religion should be spent in banishing the evils. This country is still a victim of superstition. Incidents of sacrificing children in the name of Tantra, and branding a woman a witch by accusing her of practising witchcraft are still happening. So, defeat these evils first!. 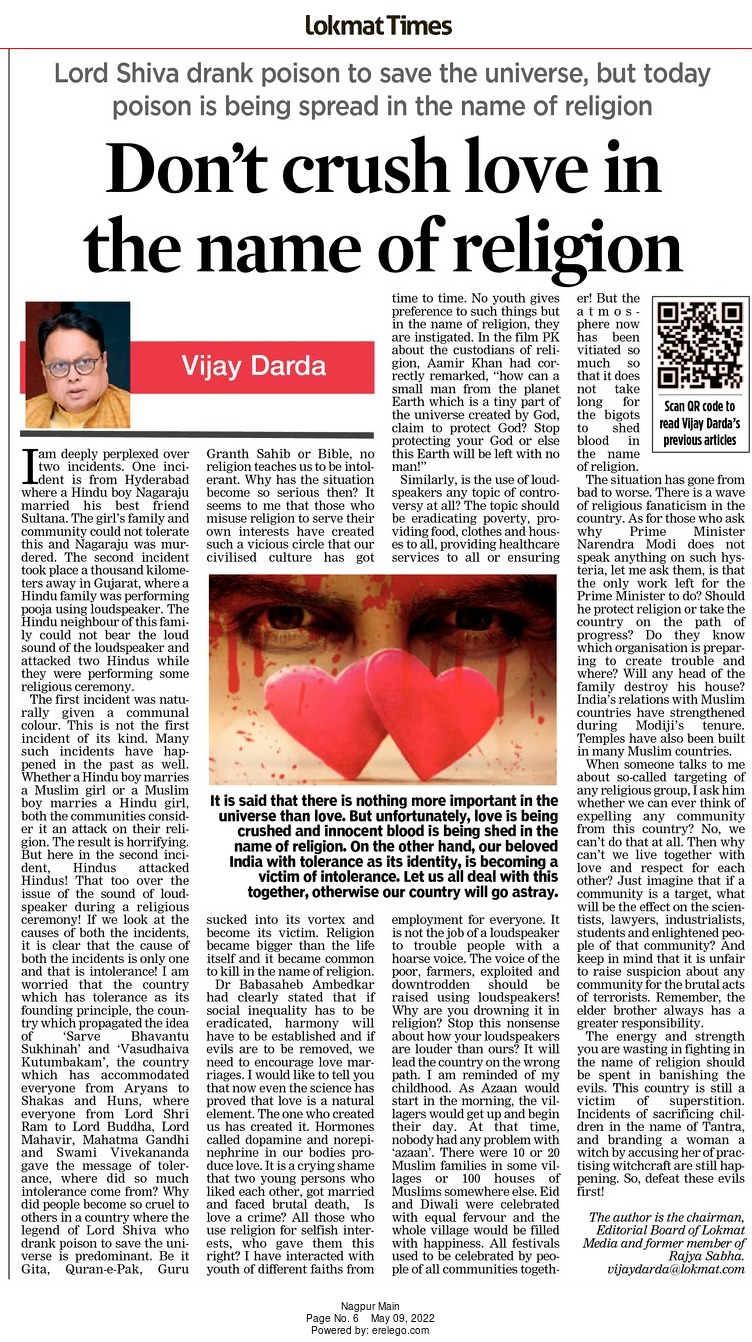