The vice-chancellors (V-Cs) of five major universities of Vidarbha on Wednesday concluded that a collective effort was required to prevent the students’ dropout at the college level. Students of Vidarbha drop out of college mainly due to lack of skills and overall backwardness.

The five universities’ V-Cs came together at Nagpur and discussed the vital issue as part of a Lokmat initiative to generate employment by utilising local resources. The meeting, held at Nagpur, marked the golden jubilee of the Nagpur edition of Lokmat.

Former state finance minister and chairman of the Legislative Public Accounts Committee Sudhir Mungantiwar could not attend the meeting due to health reasons. He expressed his views through mobile phone call. His colleague Nitin Kulkarni was present.

The vice-chancellors, who come in contact with hundreds of colleges and millions of students, gave a comprehensive understanding of the problems of Vidarbha and its future challenges. The dropout rate at the college level and the lack of capabilities among the youth are major problems. Efforts will have to be made at the school level to address these problems. With the help of universities, educational institutions and people’s representatives, Lokmat will work for the overall development of Vidarbha. The celebration of the golden jubilee of the Nagpur edition of Lokmat and the centenary year of the veteran freedom fighter and founder editor of Lokmat Media Jawaharlal Darda alias Babuji, starting July 2 will be the beginning of this endeavour.

— Vijay Darda,
Chairman of editorial board of Lokmat Media and former member of Rajya Sabha

Prime minister Narendra Modi’s announcement to double the income of farmers cannot be realized without animal husbandry and dairy and fishing. Maharashtra University of Animal and Fisheries Sciences can play an important role in skill development required for this. The university has undertaken an ambitious project to increase milk production in Vidarbha in 100 tehsils. There are many employment opportunities in this sector. Importantly, this employment can be established not only in rural and tribal areas, but also in urban areas through pet care, nursing etc.

As Rashtrasant Tukdoji Maharaj Nagpur University is the parent institution of all the traditional universities in Central India such as Sagar, Jabalpur, Amravati, Gondwana, we have a big responsibility for the sustainable development of the region. However, only through the use of local resources can the mindset of job creation and entrepreneurship be developed. Rashtrasant Tukdoji Maharaj Nagpur University has undertaken various activities to mark its centenary year starting on August 4. We have a village level network of more than five hundred colleges and four-and-a-half lakh students available to us. A plan has been chalked out to use the cultural medium of folk art. A plan is being implemented to train at least 25 students from each district for competitive examinations at the expense of the university.

Lokmat is constantly aware of the needs of the people of Vidarbha. Its effort for the overall development of Vidarbha by involving universities and the educational sector is a welcome step. Education is the foundation of human development. Therefore, as a people’s representative, we will be together in this effort. There is so much to do in this field. Some work has been done, and much remains to be done. I have no doubt that all the political leaders of Vidarbha will be with me.

Only 17% of the students who take admission to a degree course get the degrees in the first attempt. The concern is about the remaining 83% of students. As it is, only 30 per cent of students pass the graduation. For the past few months, Sant Gadge Baba University has been working on an ambitious project to reduce the 70% dropout and increase the number of students as well as quality of college education. The curriculum also includes skills development, project work and employable activities, especially for the universalization of degree education. It will be implemented from this academic year.

Students are made to chase unrealistically big dreams, and then they suffer the frustration of failure. To avoid this, we need to work on small skill development among students. They need to be taught short courses along with central and state competitive examinations. Gondwana University, which takes care of backward students in tribal districts, has started Tally training for students, along with regular education, with the help of Chartered Accountants Association. The university does this at its own expense. Apart from that, expert trainers are being called from Delhi to guide the students for Union Public Service Commission examinations.

To create opportunities for the students of agriculture in other sectors, Dr Punjabrao Deshmukh Agricultural University has started a competitive forum in Akola. It has a huge hall and study resources. Now the varsity is trying to open its branches in every district. A lot can be done for agriculture development in Vidarbha, as well as creating new career opportunities for the children of farmers through 26 colleges in jurisdictions of the university. As Lokmat is taking the lead, a comprehensive campaign can now be launched. 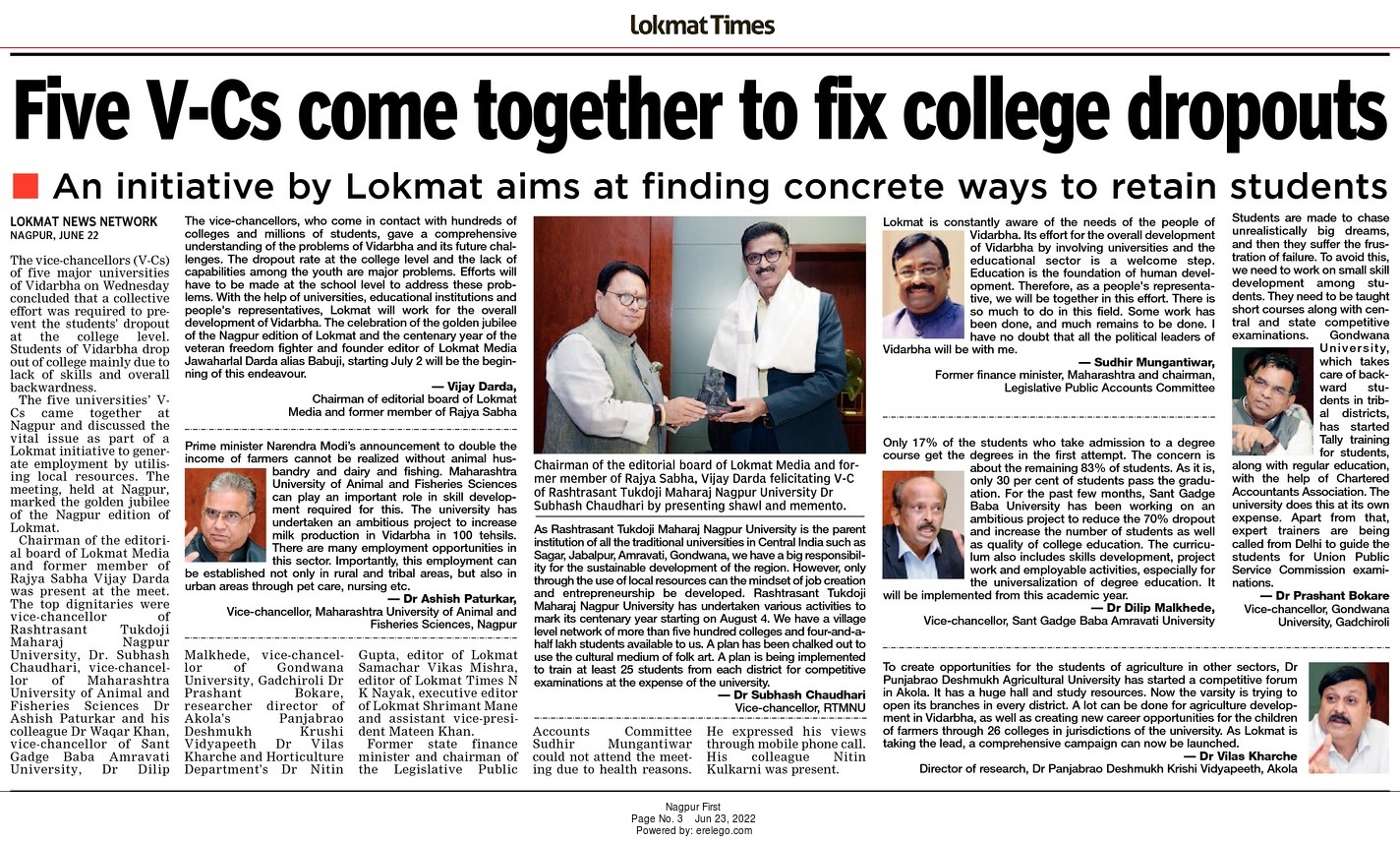