Veteran freedom fighter Jawaharlal Darda dedicated his life to the noble cause of upliftment of the society. He worked selflessly for the welfare of the masses. He was always engaged in promoting education and journalism for the good of the society. He devoted himself to social service and always kept the interests of the common people paramount in mind. Babuji was a multidimensional personality, and inspiration should be drawn from his works, observed governor Bhagat Singh Koshyari.

On the occasion of 24th Smriti Diwas of Babuji, he also appealed to the people to resolve to make the country self-reliant in order to make it a ‘Vishwa Guru

The new building of Jawaharlal Darda English Medium School was dedicated to the people and the osteopathy camp of Dr Goverdhan Lal Parashar (Rajasthan) was inaugurated at the hands of governor Koshyari at a programme organised on the lawns of Matoshree Darda Sabhagruha on Thursday. Former Union home minister Sushilkumar Shinde, district guardian minister Sandipan Bhumre, world renowned osteopath Dr Goverdhan Lal Parashar, chairman of editorial board of Lokmat Media and former member of Rajya Sabha Vijay Darda and the editor-in-chief of Lokmat Media and former education and industries minister Rajendra Darda were seated on the dais.

Babuji was ahead of his time and always thought of the society. Before independence, he worked hard and contemplated how to get freedom for the country and after independence, he only thought of how every citizen of the country could get justice and progress. A big heart is needed to dedicate everything to the country which Babuji alone possessed and that is why he always thought of the good of others. Babuji also served a jail term during the independence movement. Today, while paying tribute to Babuji and all the revolutionaries, everyone needs to think and make efforts to see how the country can be taken to a new height of economic prosperity, said Koshyari and emphasised the need to make sincere efforts to ensure social and economic equality to realise the dream Babuji strove for all his life.

Sandipan Bhumre, in his address, said Babuji belonged to entire Maharashtra and not Yavatmal alone. Babuji had a lion’s share in the development of Aurangabad. Waluj MIDC in Aurangabad came up when Babuji was the industries minister while the second MIDC in Aurangabad, i.e. the Delhi-Mumbai Industrial Corridor (DMIC) was set up when Rajendra Darda was the industries minister. Dr Goverdhan Lal Parashar also spoke on this occasion.

“Babuji had faith in constructive works. Babuji, who had tremendous faith in human values, also made immense contributions in the field of health and education. He always thought about the last person in the society”, said Vijay Darda.

He said Babuji first jumped in the freedom struggle against the British and after independence, he devoted his life making people aware of their rights through ‘Lokmat’.

At the outset, secretary of Hindi Prasarak Mandal Berar and former MLA Kirti Gandhi made the introductory remarks while the principal of Jawaharlal Darda English Medium School Mini Thomas proposed a vote of thanks. 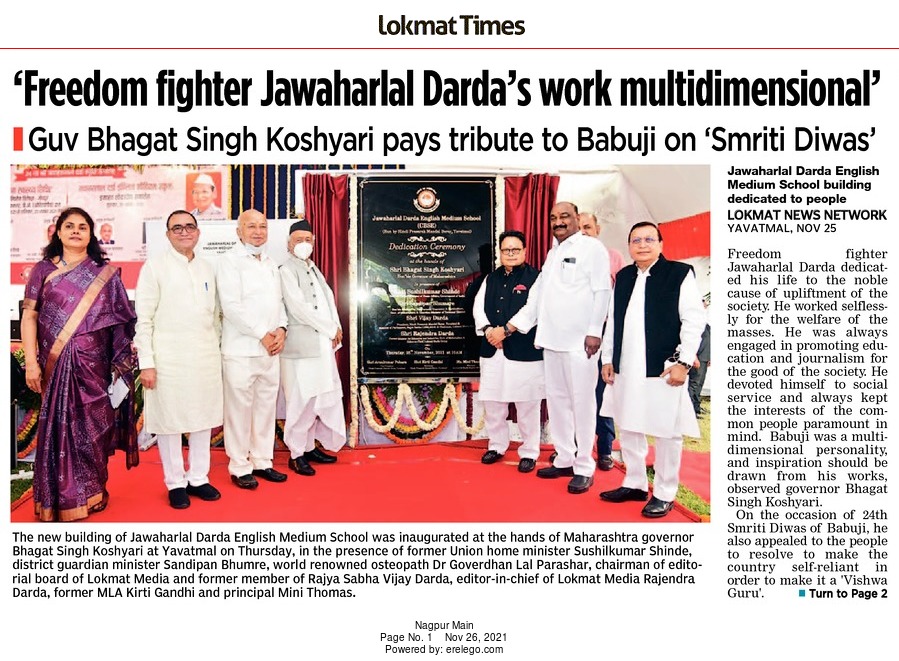