I will try my best to bring max investments to Maha: Dr Karad

“Prime Minister Narendra Modi has reposed his full faith in me by entrusting me with a major responsibility of the finance department. I will definitely make the best use of this opportunity by trying to bring maximum investments to Maharashtra,” said the Union minister of state for finance Dr Bhagwat Karad.

The chairman of editorial board of Lokmat Media and former member of Rajya Sabha Vijay Darda called on Dr Bhagwat Karad at North Block in New Delhi late on Tuesday. Darda wished Dr Karad all the best and hoped that the latter would leave no stone unturned in doing public good. During this meeting, Dr Karad walked down the memory lane, expressing his gratitude towards many people. “In the ascending graph of my political career, I received the blessings and best wishes of many people,” he said.

Dr Karad said, “The finance minister Nirmala Sitharaman has assigned me important responsibilities like banking, insurance, disinvestment, etc. Banks, insurance are the subjects that concern the common people. I am thinking about how this system can be improved.” He further said, “I will study all the issues for six months and make decisions in the interest of the people of the country.”

“I will give priority to bringing investments to the backward areas of Vidarbha, Marathwada and Konkan regions in Maharashtra. The problem of unemployment faced by the people can be solved thus,” he said, adding that Prime Minister Narendra Modi has consistently considered safeguarding the interests of farmers. He has always maintained that the farmers should get more and more benefits from insurance schemes.

“Farmers are constantly exposed to natural disasters and therefore, their interests and their sustainable development are also part of my ongoing study. I hail from the (Marathwada) region where I know the plight of the farmers, the hard-working people,” Dr Karad further said, adding that Prime Minister Modi shares the pain and concern of such people. “I will work for the development of the poor, bring smiles on the faces of the common people and give confidence to the entrepreneurs in doing their business,” observed Dr Karad. 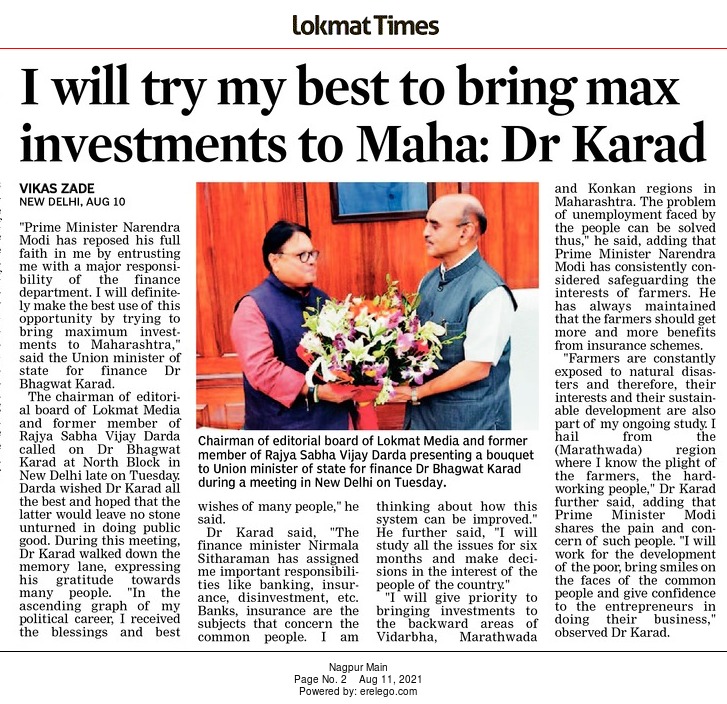