It is now more than a week since nature’s fury struck the Himalayan states of Uttarakhand and Himachal Pradesh. For want of a better description we can stick to the expression ‘Himalayan Tsunami’, but then let us not ignore the fact that very little is known about the magnitude of death and destruction in this tragedy. The concerned people are scared enough and do not wish to make even guess-estimates, but everyone seems to be veering to the point of view that the toll could be ‘shockingly high.’ However, the things that are known are by themselves bone-chilling.

A rescue effort launched by the army on a war footing could not really pull out all the persons involved into a zone of safety, and more than 20,000 persons were still awaiting to be rescued after one of the biggest such operations had been launched, with the apprehension that the next bout of rainfall was just 24 hours away. Now, if these persons survive the scars of the tragedy, it is more a tribute to their sterling powers of resistance, than a compliment to the government for rising to the occasion.

The plain fact of this tragedy is that failure is writ large on the wall when it comes to measuring the government’s performance. There is no one who shall ever argue that the people living in these areas should be denied the fruits of development. It is nobody’s case that they should not have power projects or there should be no roads or no construction works. In any society the developmental aspirations of the people cannot be ignored. But then these works should not be undertaken as if there is no tomorrow. It is here that the government’s failure is writ large. It failed to strike the right balance between the views of the environmentalists who oppose all development, and the geologists who argue that the ecology should be respected. They favour development that is in sync with the conditions that prevail in the region. Development in Uttarakhand cannot be akin to the same process in the plains. This basic fact was ignored, and that is why this tragedy was called a man-made disaster.

It is true that the 340 mm of rain that fell was five times the normal rainfall of 60-70 mm. It is equally true that the weatherman has not exactly endeared himself with the common people for the accuracy of his predictions. Indeed, the popular culture is that when he predicts rain, you can be pretty sure that there is bright sunshine, without a speck of dark clouds. So, the question is irrelevant as to why did the authorities fail to stop so many tourists? We are a deeply religious country, and there is no stopping the people when it comes to faith. For them, faith moves mountains, and at all times it is reassuring for them that they can embark on a pilgrimage and come back safe and sound against all odds with the blessings of the Lord. But for the ones who could not make it back to home, the same sentiment prevails even after this disaster. Indeed, it would not be inappropriate to mention that their demise would also be seen in some sections of the society as a form of divine justice, just as there are many believers who feel that this nature’s fury is also some kind of divine retributive justice for having played havoc with nature.

The tragedy has already sparked off a debate about the status of preparedness of the National Disaster Management set-up in the country and the states. The failure of the State and Centre has been accepted by the authorities in this case, and it has also been conceded that the advanced weather forecasting systems that could have been put in place are not yet there, for surely avoidable reasons. The mechanism was set in motion after the Gujarat earthquake, but then like everything else that functions within the bureaucratic domain, it also leaves much to be desired. The first and foremost human failure in the present context has been the sluggishness to come to terms with the magnitude of the disaster. It is shocking that in this age of superfast communication, it took such an inordinately long time for the entire gravity of the situation to sink in. The fact that the Uttarakhand chief minister made a trip to Delhi after the disaster had struck simply compounds the magnitude of the human failure. There is nothing that can redeem such a colossal blunder. We have the Union home minister Sushilkumar Shinde on record accepting that there has been a lack of coordination between the state and Central governments. In such a grave situation, when it has surely made a difference between life and death for the trapped persons, this is not something that can be taken lightly. More so, when there is no apparent or real lack of resources in terms of men, material and equipment to pick-up the challenge of any situation.

It is a redeeming feature that the defence forces rose to the occasion, and won the plaudits of all. This is their tradition, and they have lived up to it. But this does not detract from the failures of the others. Similarly, the Congress president Sonia Gandhi too has lived up to her high standards of sensitivity and taken the lead in overseeing the relief efforts. But this does not stop the usual political rivals from taking pots shots at Rahul Gandhi for his alleged lack of visibility. At times one wonders about the quality of the public discourse. Do we want tokenism or substance in such critical situations?

Gigantic as the challenge of the rescue effort has been the much more difficult task of reconstruction lies ahead. This would be a test of our national character. Do we demonstrate the collective ability to learn from this disaster and work out a meaningful balance between developmental aspirations and ecological needs? Do we build structures sensibly this time and follow the strict norms observed by our ancestors when they built the Kedarnath temple that stood tall amid the ruins? Or we once again let crass commercial concerns to push us to the same path of destruction? Future generations would judge us on the basis of the road that we take after the immediacy of this disaster passes away.

Furthermore, in India, pilgrim centres which see a mass congregation of people need to have forewarning systems such as weather updates, crowd and traffic regulation, stoppage of over crowding of destinations so that in emergencies the local authorities are able to handle the situation. Moreover all weather helicopters and helipads need to be stationed at such destinations for a quick response. Weather updates must restrict the entry of visitors to prevent casualties of such proportion. Alternate means of communication, whether conventional or modern, need to be installed at greater heights so that flow of communication is not affected as experienced in this tragedy. It’s about time we learn from other countries as to how they manage and prevent disasters of every magnitude. Lip service in disaster management must stop. 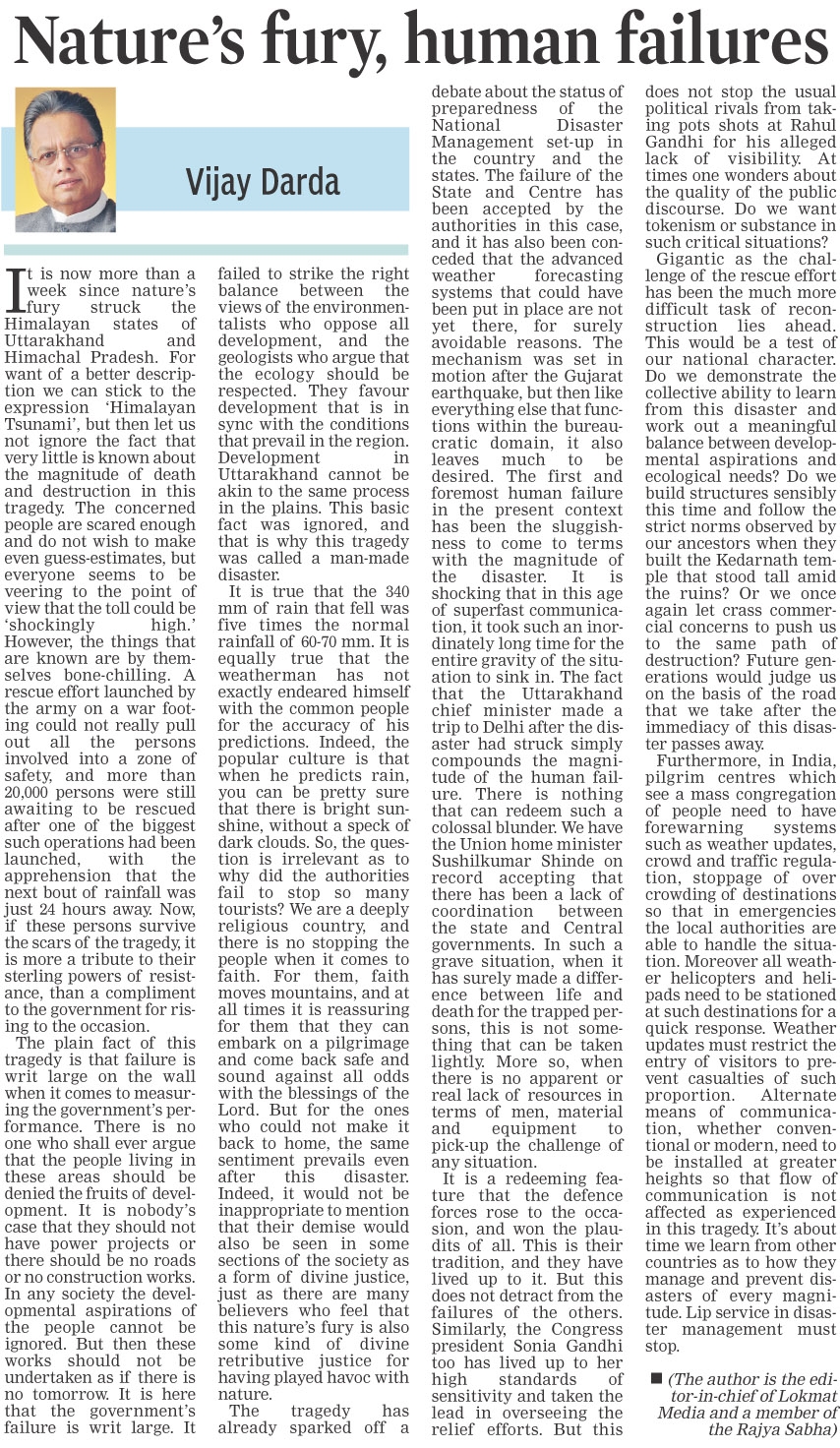