In an epoch-making decision, the Supreme Court has handed down a straightforward verdict that will write a new text on the canvas of time. The court said women can also take command posts in the Army like men. Command post means to lead a contingent. Simply put, women will get the opportunity to participate in the war directly. There are women in the Indian Army but they were not given command posts till now.

Actually, the Delhi High Court had handed down the verdict in 2010 but the government did not approve it. The government’s arguments were very strange. It stated that women have less physical capacity. They may stay away from work for a long time due to pregnancy. They handle household chores and family responsibilities, therefore cannot handle the challenges of military. Unfortunately, if they become prisoners of war, it will be a stressful situation. One of the government’s arguments was completely incomprehensible that most of the men in the Army come from rural areas, so they would not be able to accept women as their counterparts!

Justice D Y Chandrachud and Justice Ajay Rastogi set aside government’s arguments. The court rightly said that women cannot be treated unfairly due to social perceptions. The government suffers from bias in this matter. When women can fly fighter aircraft, why can’t they lead a contingent in the Army? Doubting the physical ability of women is an insult not only to them but also to the Army. The apex court has now given three months to implement the verdict and we should hope that the government will give women equal rights and opportunities in the Army.

Nonetheless, we must consider why women have to face injustice in other echelons of life as well though in my view women are more capable than men. After all, we men too have been brought into the world by women. In recent times, I have seen that even in Maharashtra, which is called an advanced state, hurdles were created in the path of women becoming commissioner of police and chief secretary. Why, after all? In fact, our governments have also been plagued by prejudice. This should not be tolerated in any case.

Our history is full of instances of bravery and courage of women. The story of Rani Lakshmibai’s heroism is still in the mind of every Indian even after 162 years. The world still remembers the courage of Jijabai, the mother of Chhatrapati Shivaji Maharaj. Kalpana Chawla, the daughter of India, who took a giant leap into space. However, I would like to discuss here only those women military officers who were mentioned in the petition filed in the Supreme Court. Who can forget Major Mitali Madhumita? She has been awarded the Army Medal for bravery. When the Indian embassy in Kabul was attacked in February 2010, she saved 19 persons buried under the debris. How can Lieutenant Colonel Sophia Qureshi be underestimated?

She was the first woman to lead an Indian Army contingent in a major foreign military operation. She also served in Congo under the Peace Mission. Lieutenant Colonel Anuvandana Jaggi has been awarded the United Nations Force Commanders Commendation Award due to her exceptional abilities. Lieutenant Bhavna Kasturi and Captain Tanya Shergill have led a troop of men in the Republic Day and Army Day parades. How can we forget the names of brave officers like Ashwini Pawar, Shipra Mazumdar, Divya Ajit Kumar, Gopika Bhatti, Madhu Rana and Anuja Yadav. They have proved their passion.

I am confident that our women will give a befitting reply to the enemy in the battlefield. Wherever women in the world have got an opportunity, they have demonstrated their indomitable courage. The world has seen what the Yazidi women of Iraq have done to the terrorists of the Islamic State in recent years. In the Second World War, the Soviet Union dispatched women to the battlefield though now women are not allowed in Russia. When the United States and Britain sent their troops to Afghanistan and Iraq, the women’s contingent was also with them. Although the women of the two countries were not allowed to join the war at that time, the situation became such that the women contingent had to go into battlefield and about one hundred women got martyred. In 2013, American women and in 2016 Britain’s women were allowed to join the war.

By the way, Israel, North Korea, Norway, Finland, Sweden, France, Canada, Germany, Poland and Australia are among the countries where women are allowed to join the war. Norway then started the Jegertroppen in 2014. It is a group of female soldiers. You can call them super commandos. It has proved its bravery in Afghanistan. And as far as Indian women are concerned, they have the courage and patience of a lioness. They are second to none!

The Supreme Court’s decision in granting equal rights to women in the Army is highly appreciated. No one should doubt the capability and courage of Indian women. This decision will prove to be a new chapter on the canvas of time. 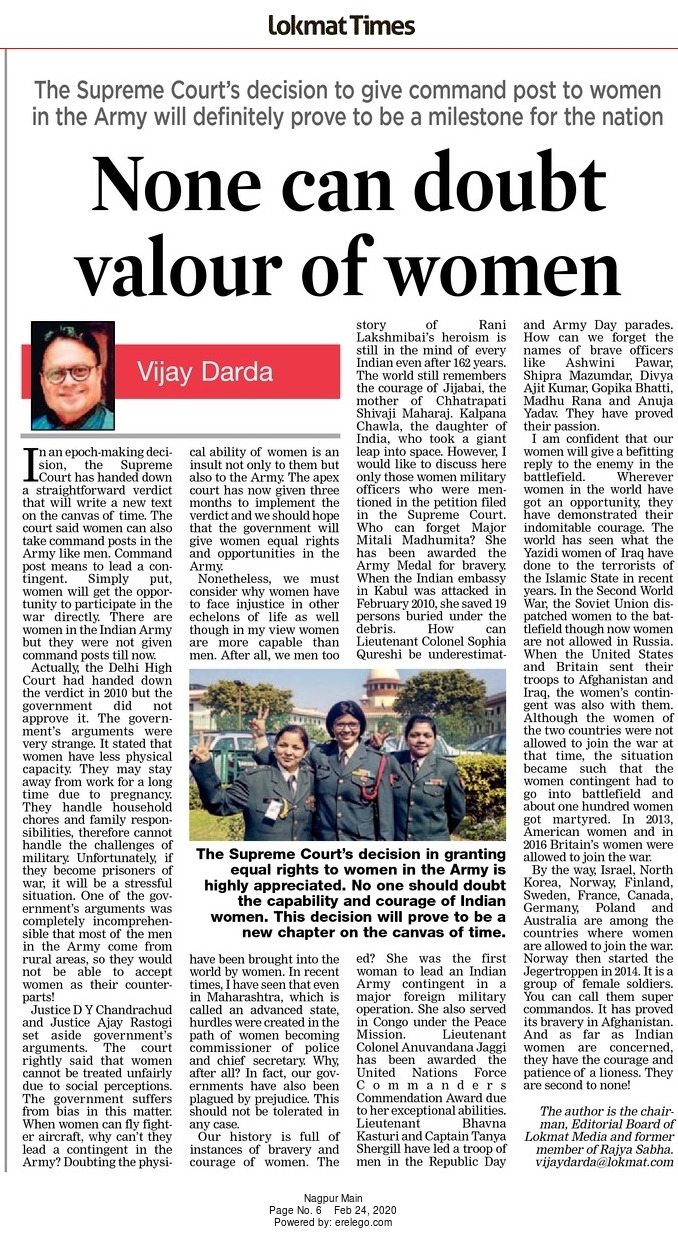 These are the Trojan horses of Congress