Paramount question is: Where are govt jobs?

Reservation for the general category poor is welcome, but the point is: Why was it thought of only at the time of elections?

The Central government announced a 10 per cent reservation for the general category poor in government jobs in such a hurry that the Opposition parties were left bewildered. I am using the word hurry because right before this announcement, the government had itself stated that there was no proposal under consideration of the government for granting reservations on economic basis. Obviously, the proposal came suddenly and the electoral arithmetic is very obvious. A demoralised Bharatiya Janata Party which suffered severe electoral drubbings in the three states took such a step so that it would gain electoral benefit in Lok Sabha elections.

Objectively, this is a good step. Efforts should be made to bring the people of any caste or religion to the mainstream. No poor person can be deprived on the basis of which caste he is born in. An attempt was made to grant reservations on economic criteria even when Narasimha Rao of Congress was the prime minister, but the Supreme Court did not consider that basis to be valid. The BJP government has amended the Constitution to avoid this situation. Most parties, including Congress supported the Central government in this matter because all parties wanted such a change. Only a couple of parties protested the move.

At present, the BJP seems to feel euphoric at what it considers to be its masterstroke believing that it will reap electoral dividends in the Lok Sabha elections. But the big question is that even if the provision of reservation has been made, where are the government jobs? There is mismatch between employment generation and the workforce. Let alone the government, even the private sector is not able to generate jobs for the number of educated youths being churned out by our universities. You can predict the worrisome situation of unemployment in the country from the fact that recently the railways advertised one lakh jobs after 30 years.

These jobs were for trackmen, porters and electricians. Just hold your breath, a whopping 2.30 crore people applied for these posts. Mumbai Police was to recruit 1,137 policemen for which more than two lakh people applied. Among the applicants were many well educated youths. Similarly, mote than two crore people applied for the 368 clerical posts in the Uttar Pradesh secretariat. Just consider the data of the Staff Selection Commission; it invited applications for 40,000 different posts in 2016-17 and received 3.37 crore applications. Before that, it had received 1.48 crore applications for 25,138 posts in 2015-16.

These are intimidating figures which raise the legitimate question that when unemployment is increasing at such a fast pace, why is proportionate employment not being generated? When jobs do not exist then what is the use of reservation system? The government should be asked how many jobs it has created to benefit the reserved categories. BJP had promised the moon to the youth of this country during the last election under the leadership of Narendra Modi. He had talked about providing jobs to two crore youths but he could not fulfil his promise. Nobody is able to tell as to how many young people got jobs.

The latest figures of the labour bureau are not available. But according to the data available, the rate of unemployment in the country has reached the highest level of five years during the year 2015-16. A report also came in which it was said that on an average more than 500 jobs are disappearing every day. It is feared that 70 lakh jobs out of the existing jobs will disappear completely by the year 2050. There are many reasons for this worrisome phenomenon. The biggest reason is the rapid change in technology. But then the government should make plans to deal with this situation which does not seem to be happening.

Now leave aside jobs, let’s talk about employment only and the scenario looks frightening. Earlier, the agriculture sector employed about 60 per cent of the people, but this figure is now less than 50 per cent. Young people are migrating to cities in search of employment. Employment situation in cities is also not very good. It is believed that the construction sector generates the highest employment. But after the note ban, this sector has been the most affected and the employment opportunities have reduced.

The youth of the country understands the entire situation. He sees his trust betrayed. He knows that the announcement of reservation is redundant because when jobs are not there, what will be the benefit of reservation? He knows that these are election gimmicks. The youth of this country is dreaming of the day when there would be so many opportunities available for employment that he would not need reservation. But there is no hope for this at the moment. For political parties, it has become more important to win elections somehow and stay in power at the cost of the nation.

The BJP government at the Centre has taken the Opposition by surprise by announcing 10 per cent reservation for the general category poor. Other parties including the Congress, supported the move but raised the question as to why the government took this decision all so suddenly before the general elections? However, the bigger question is, where are the government jobs? 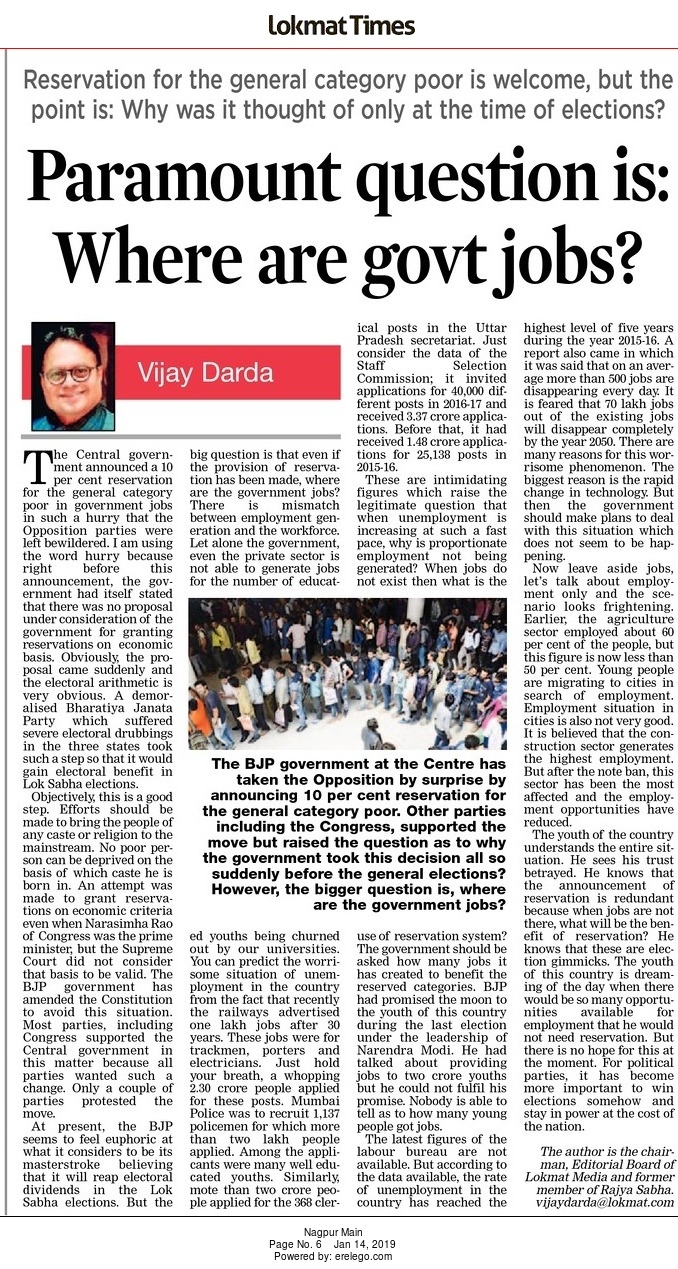