When the founding fathers of our constitution gave us a federal structure with unitary features, they were clear in their mind that subjects like foreign policy and defence belong to the domain of the Centre. But like everything else there has been an erosion in these values as well. Now, foreign policies no longer belong to the Centre’s domain but these are shaped at the diktat of state capitals. We saw this happen in the case of Bangladesh when the mercurial West Bengal chief minister Mamata Banerjee torpedoed the prime minister’s efforts to work out solutions to long pending border issues and Teesta water sharing disputes.

Now, the latest instance has come in which all the Tamil Nadu politicians along with the BJP have joined hands to demand that the PM stay away from the summit and make him abandon his plans to attend the Commonwealth Heads of Government Meeting (CHOGM) to be held in Colombo. This decision by the prime minister has come after due deliberations, and from all accounts against the rational advice of the foreign policy experts that it shall work against the nation’s diplomatic and strategic interests. Electoral considerations and the demands of coalition politics have led to this decision. We can be certain that a different decision would have emerged if this would not have been an election year.

This, however, is not a one-off thing or an unusual thing that can be ignored as a temporary phenomena. For several years now this has become the regular feature of the decision making process. During the days of UPA-1, the government policies were hostage to the demands and concerns of the Left parties and finally there was a historic confidence vote on the issue of the nuclear policy. They did not allow the rationalisation of retail prices of petroleum products and that led to built in pressures on the economy. Later, in UPA-2, we are all familiar with the tantrums of the TMC leader and the unusual situation in which the railways minister was forced to resign after he presented the Railway Budget, and before the budget could be passed in the Parliament. Now, it is alright to appreciate the diversity of Indian democracy and its plurality but then such a behavior really reduces our country to become a laughing stock in front of the world.

The price has almost been paid in terms of investor confidence. The political football that has been played on the issue of foreign direct investments in retail with parties changing their stance and attitudes to suit their perceived vote bank interests (the retail shopkeeper for the BJP) and the kind of threats that have been issued to reverse the policy after coming to power hardly enhance the country’s stature as an investment destination, and if our economy faces a slowdown a huge part of the problem is this erratic political behavior.

It could also be paid in international relations as humiliating Sri Lanka can have the impact of allowing the Chinese to becoming increasingly influential in the region.

We could ignore these issues if there were some genuine domestic concerns at stake, but the problem is that it involves more of political posturing and playing to the gallery. Thus the Tamils in Sri Lanka simply do not want the Indian political parties to interfere in their matters. Indeed, the chief minister of newly-elected state government in the Tamil province of the vanquished LTTE rebels led by the chief minister C V Wigneswaran has actually invited the prime minister to visit the area and then impress upon the Sri Lankan government about the steps that need to be taken for the protection of the people. Moreover, none of these political parties including the BJP said a word beyond the proforma noises when the last assault was mounted against the rebels, and atrocities were actually committed.

A deeper analysis of any issue would reveal that the concerns that are expressed in the guise of political opportunism have nothing to do with the real cause. Just as the Sri Lankan Tamils would be benefitted by the prime minister’s visit, similarly, there is ample evidence that the local traders have traditionally prospered with the advent of the large retail chains but then this does not serve partisan political interests.

Policy changes to suit political interests are not the only part of the wages of a coalition era.

The kid glove treatment to errant political leaders on the side of the ruling coalition and stiff management for the others are just another expression of this gross distortion. This observation is made with a caveat that there should be leniency towards anyone howsoever high or mighty when it comes to punishment or corruption or wrong doing. But then playing to the gallery or indulging in acts that go against the letter and the spirit of law merely for the satisfaction of public sentiment is hardly the recipe for establishing the much coveted rule of law.

The observation of the Gauhati High Court about the unconstitutional status of the CBI has been expectedly stayed by the apex court, but then who can deny that some basic issues have now been raised, and for once these also have the Supreme Court in their ambit. So long, the apex court has acted as if all the rest are fallible and it is the only one that’ s above such human failures. One is also reluctant to make any comment about the courts given their sensitivity, but this time the observation has come from another court.

But the selective use of CBI to prosecute cases or ignore them as in the case of the Rs 5,600 crore NSEL scam cannot be ignored. We are destined to live with this malady at least in the foreseeable future as here seems no escape from coalition politics in the near term even with any change in the main party that heads the ruling outfit. The need of the hour is for the regional parties to evolve into mature political entities and separate their roles in the context of state and national politics. Unless the state leaders develop this vision and pragmatism they would not only be hurting national interests but their own as well. Imagine the outcome if Sri Lankan Tamils or the Nigerians start flexing their muscle against the growing Indian diaspora in their respective territories. 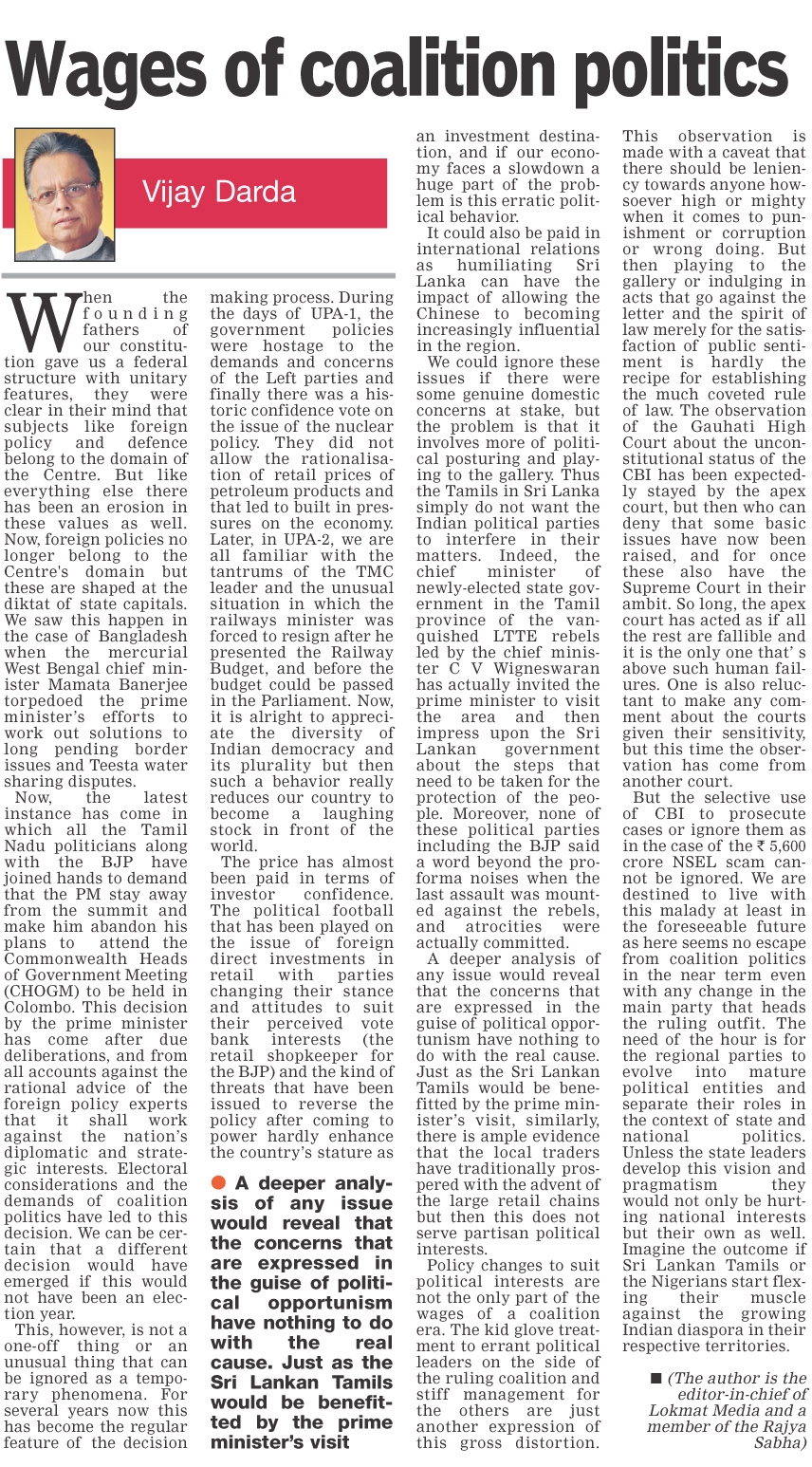 From Ammu to Amma: Rise, fall and rise!