Vid projects get plenty of funds in Budget

Although Union finance minister Nirmala Sitharaman presented the General Budget in Parliament on February 1, it was revealed  only on Wednesday how much funding was provided for the railways after the release of Pink Book.

It shows that a plenty of funds has been given to the railway projects of Vidarbha. A provision of  RS. 347 crore 1 lakh 44 thousand has been made in the Budget for the ambitious 270 km-long Wardha-Nanded (via Yavatmal, Pusad) railway line which is vital for the growth of Vidarbha and Marathwada.

Similarly, `100 crore has been provided for Jabalpur, Gondia, Balaghat, Katangi and other rail routes (285 km). Interlocking of rail gates will be done to run the train between Durg and Nagpur at a speed of 160 km.

It may be noted that chairman of the editorial board of Lokmat Media and former member of Rajya Sabha Vijay Darda has been striving hard for this railway project. He had proposed the Wardha-Nanded (via Yavatmal, Pusad) railway line to the then Railway minister Lalu Prasad Yadav. This railway line will help in the allround development of Vidarbha. 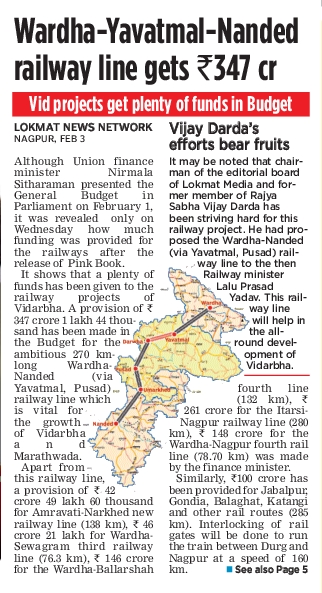