Injustice to the police personnel handling law and order situation

If you are asked which government department has the highest responsibility but is mostly neglected, then the only name that emerges is of police department. If any crime happens, then people lay all the blame at the door of police. It is also natural because the common man sees the police with great hope. He believes that if the police is around, then there is a complete guarantee of security. When I am talking about the police, I am also discussing the condition of paramilitary forces under the central government along with the police of different states.

I have always been pained by the neglect of the police force. I had raised this issue in Parliament several times during my parliamentary tenure. Ironically, no concrete step has been taken so far to ameliorate their lot. The reality is that the police force is being meted out a step-motherly treatment. The election season is going on and you can see the vigilant jawans deployed at the polling stations to protect the EVMs. Do you know what these soldiers get for this hard duty? Leave aside the statistics, just understand that they do not even get thirty per cent of the remuneration received by an election officer on duty at the polling booth. Why this injustice? The police personnel are doing important job like ensuring security and carry a higher risk to their own life. They should get more remuneration. Not only that even common facility like drinking water is not made available for these policemen.

In fact, our system has become such that the attitude towards the police is not correct. When I go abroad and see the police up-to-date and smart, question arises in my mind as to when will our police become so smart and resourceful? The truth is that our country has not started thinking in this direction. You will be surprised to know that only three per cent of the Central and state government budget is spent on the police. Some states spend less than 2 per cent. We expect that the police should do their job with full efficiency, but the government does not pay attention to how the extra burden on the police is reduced. If we take into the policing requirement of the whole country then about 22 lakh 80 thousand posts are sanctioned in the state police force but the actual number employed is around 17 lakh 30 thousand. About 24 per cent posts are still vacant. The sanctioned strength in Central forces is about 9 lakh 70 thousand, but 7 per cent of these posts are lying vacant. We have only 150 police personnel per lakh persons, but according to the UN standard, there should be 222 policemen for one lakh persons.

You will be surprised to know that 85 per cent of the police of different states, on average, are constables. There are not enough opportunities for their promotion. Most of them retire as head constables. Then how will they feel motivated for delivering good performance? The circumstances they live in are sordid indeed and their residential quarters are ill-equipped. Now the condition of the police stations is improving but the condition of their residential quarters remains unchanged. Their working hours are not fixed. A policeman works for 12 to 14 hours on average. Police should get at least one day’s leave in the week but they cannot get it. So how can we expect them to work better under stress?

Equally pathetic is the condition of the paramilitary forces under Central government. Step-motherly treatment is being meted out to them too. While protecting the border or deployed in a Naxalite belt, the jawans lay down their life for the motherland but do not get the status of a martyr. They are not provided the kind of facilities provided to the Army, though they face similar risks and dangers.

I once raised this issue in Parliament about this injustice. The government should consider how our police force becomes smart and provide them good resources. The high performing police personnel should be given rewards to make them feel that their work is being appreciated so they will get motivated to put in their best efforts in their policing task.

After Sadhvi Pragya, Lok Sabha Speaker Sumitra Mahajan has insulted martyr Hemant Karkare. The country will never forgive her for her utterances. The people are already annoyed with Sumitra Mahajan because she did not work in keeping with the dignity of the Speaker of Lok Sabha. Though the person sitting in this position belongs to the ruling party, he or she has to be impartial while occupying this exalted position. Sumitra Mahajan failed to do justice to the post. 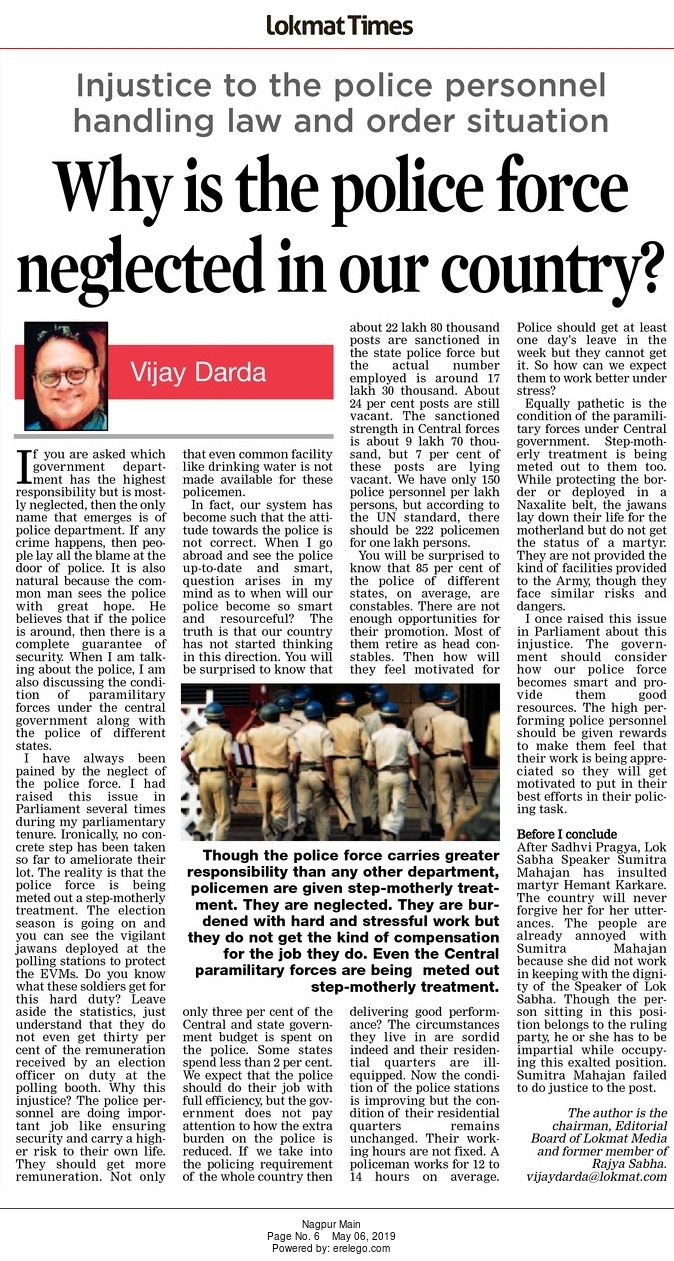