Why talk of referendum in Kashmir now?

No right thinking person will ever support the brutal physical attack on Supreme Court lawyer Prashant Bhushan in his chambers. We are a free democratic country, and freedom of expression is a fundamental right. So, quite rightly the attack has been condemned by all political parties, and it is rightly seen as an expression of intolerance and fascist attitude. Never for a moment can such an attack specially by self-styled ‘senas’ that seek to gain mileage by using names of such patriots as Bhagat Singh, be justified.

But the issue is not just limited to the freedom of expression. This remains sacrosanct as ever. The question is why is a senior lawyer like Prashant Bhushan invoking the name of Pandit Jawaharlal Nehru in 2011 to defend a position that was advocated in 1948 under a totally different set of circumstances. He is surely aware of the fact that Nehru had made that offer because the UN representative Owen Dixon had argued that Kashmir should be trifurcated as it would be impossible to govern. Then again, Nehru had also made it clear that a plebiscite can be held only when the Pakistan army vacates the region under its occupation. Isn’t Bhushan aware that 2011 is not 1948? Then again who is demanding a plebiscite in Kashmir now? Is he not aware that in 1954 itself the Jammu and Kashmir constituent assembly had ratified the accession to India.

But Bhushan’s argument becomes alarming when he suggests that such a plebiscite should be held to ensure that Kashmir does not become another Afghanistan? Is there any comparison between the two places? Even during the worst days of the crossborder- sponsored militancy in Kashmir, the situation could never have been compared to Afghanistan. Then why is Prashant Bhushan making this comparison now? Why is he making these statements: “We don’t want to retain Kashmir at the cost of suicide bombings… We don’t want Kashmir to become another Afghanistan…..The assault doesn’t change my views. This kind of attack doesn’t intimidate me… If they do not believe in freedom of speech, do not believe in our fundamental rights, then they should leave the country… They are anti-national themselves.”

Ordinarily, the views of a lawyer would not have been the cause for much public concern. But Prashant Bhushan currently has a different status. He is the legal member of Team Anna that had recently captured the imagination of the nation, and through its movement forced the Parliament to forge a consensus on the question of a strong Lokpal. Not just that, it has positioned itself on a higher moral ground than all the elected representatives of the country, and then quite recently another member of this team, Arvind Kejriwal, had taken the extraordinary step of suggesting that Anna Hazare is above Parliament. His logic was that because the citizens are supreme in a democracy, so citizen Hazare is above Parliament and thus above the rules and regulations of Parliament. One is tempted to ask that if citizen Hazare is above Parliament, then why is citizen Bagga who bashed Prashant Bhushan lower than citizen Hazare when it comes to rules and regulations? After all, going by Kejriwal’s logic both are citizens. This is not to defend Bagga, but to under underscore the warped logic that has come to dominate Team Hazare’s mindset.

Bhushan does has the freedom to undertake a critique of the governance position in Jammu and Kashmir. The question is, does he also has the freedom to negate the unity and integrity of the country? Does he also has the right to call into question the valiant role played by our heroic jawans for all the years in defending the nation’s unity and integrity against a sustained onslaught from across the border? Is he unaware that Pakistan through its ISI has always followed the policy of bleeding India by a thousand cuts and wants to compensate for its disasters in 1948, 1965, 1971 and 1996? When he makes that audacious comparison with Afghanistan, he clearly overlooks the fact that all the problems in that country are home-grown, whereas in Kashmir we have a Pakistan engineered militancy. Does he not insult the millions of Kashmiris who freely participate in the regular democratic elections? After all, in the latest round of panchayat elections in April this year, the turnout was 82 per cent defying all the boycott calls and violent threats issued by the terrorists? How can he still make a case of alienation in Kashmir?

There is some relief from Team Anna in the sense that it has disapproved of Bhushan’s views. But he still remains their valued colleague. This also brings to mind a statement from Hazare that corruption is a far bigger menace than cross-border terrorism. So, is the disapproval from Hazare’s team merely a tactical ploy? Do they really stand on the same side of the corruption versus terrorism debate?

The entire episode has brought forth a host of disturbing questions, and the apolitical nature of the anticorruption movement has also become suspect. Hazare’s group is a non-formal organisation, and if people with disparate ideologies and mindsets have come together to create some sort of faith in the public at large, then such huge personal differences have more than the usual significance. After all, these people have not gone through the usual electoral scrutiny of the public representatives, and now claiming to speak with a moral authority that they claim is higher than that of the elected representatives.

The other difficulty with these questions is that they do not lend themselves easy or clear answers. In such a situation, Anna Hazare has a far greater responsibility, and a higher burden of national interest. For Bhushan to have a personal opinion on the unity and integrity of the nation is not akin to having a personal opinion on the question of his choice of fruits for his breakfast. This is a serious question in which wars have been fought, and our people have sacrificed their lives. So, the question is why talk of a referendum in Kashmir now? It makes us citizens restless. 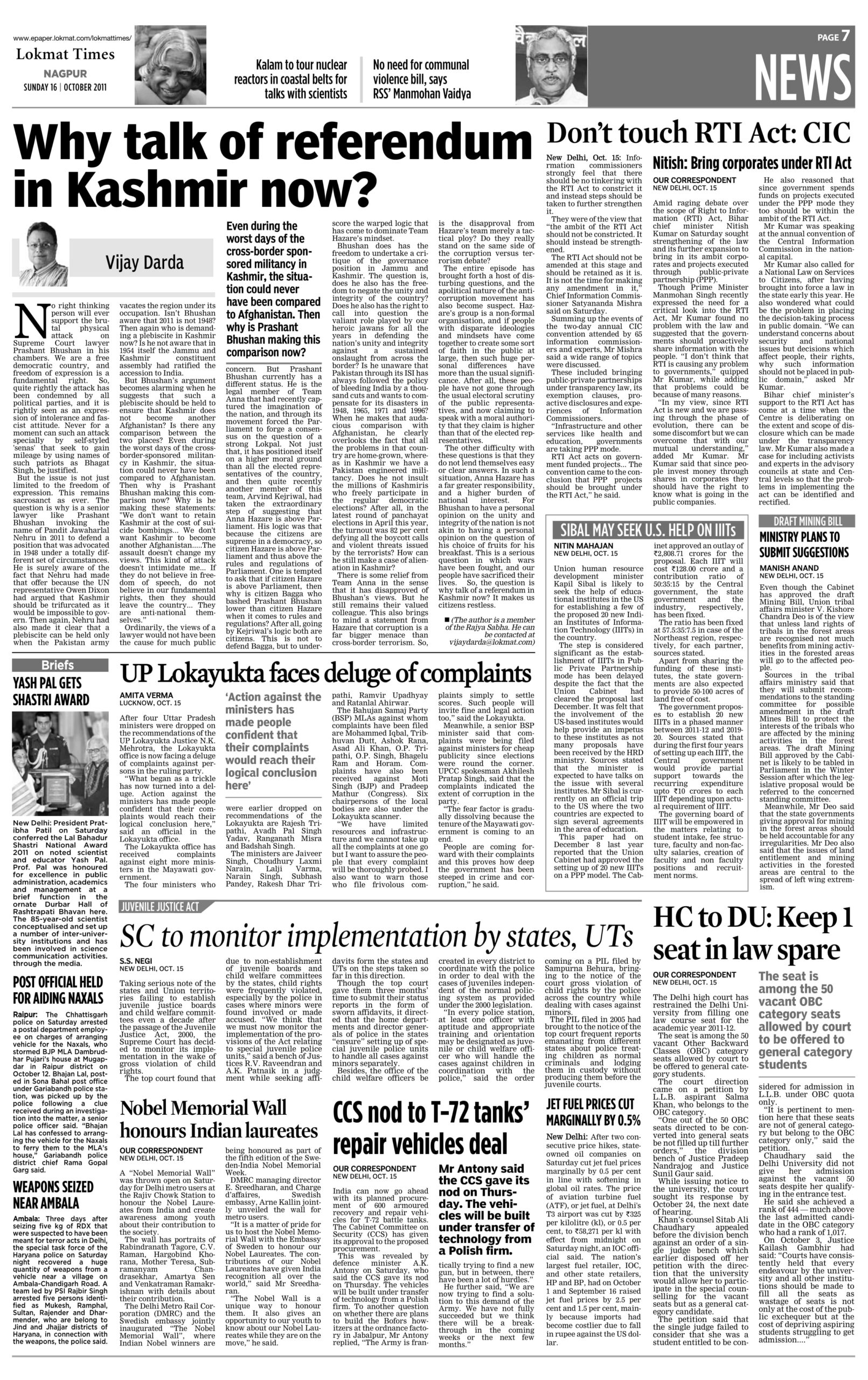 Comrade who worked out a President