Prime Minister Narendra Modi wanted to invite Donald Trump to India last year and also wanted him to be the chief guest at the Republic Day celebrations but the US President was too busy so he could not come! Then Modiji went to the US and there was that spectacular event called ‘Howdy Modi’. The way in which Modiji held Donald Trump’s hand at the stadium, it looked like he was launching Trump for the election. It is in this context that Trump’s visit to India is also being seen. He will visit India on February24-25. He will also be accompanied by US First Lady Melania Trump. A programme called ‘Kem Chho Trump!’ is going to be held in Ahmedabad in the honour of Trump. So the question that arises is whether Trump will benefit from this visit during US presidential election?

The real outcome will be seen on November 3, 2020 because the election of the President will be held in the US on that day. Capturing power once again is going to be challenging for Trump, and that is why he is trying to attract all kinds of voters. Statistics show that about 60 lakh Indians live in the United States, of which about 50 lakh are voters. On an average, 70 per cent of Indians vote. From this perspective, Trump is trying to get these 35 lakh voters in his favour. The participation of Indians in the US politics is more than 3 per cent. With this, the entire world is well aware of the important activism of Indians in the US politics!

Actually, Trump has another special reason to woo Indians. Tulsi Gabbard is the Democrat candidate for the presidency. She had adopted Hinduism long back and she is very popular among Indians. When she was elected to the House of Commons and the Senate, she was sworn in with the Bhagavad Gita in her hand. She is also supporter of India and many people even describe her of Indian origin even though she is of American origin.

Apparently, Trump’s intention is to take away the Indian voters of the US from Tulsi on the pretext of travelling to India and getting them to vote in his favour. For your information, let me tell you that Gujaratis are the third largest group of people after Telangana and Andhra Pradesh. Then there are people from Punjab and Kerala too, but Gujaratis dominate. Gujaratis account for about 40 per cent of the hotel business. The owners of more than 17,000 hotels are Gujaratis. It will be interesting to see how successful Trump is in achieving his goal. As far as Telangana and Andhra Pradesh are concerned, Trump may not be going there yet, but his daughter Ivanka Trump has visited Hyderabad in November 2017.

The second dimension of this visit is no less significant. He will be the seventh US President to visit India. Eisenhower, Richard Nixon, Jimmy Carter, Bill Clinton, George Bush and Barack Obama have visited India earlier. With the exception of Jimmy Carter, five US presidents who came to India had also travelled to Pakistan. Trump has no plans to visit Pakistan yet. If he does not go to Pakistan, it will be a big win for India. India can promote it as a strong relationship with the US. This visit of Trump is certainly very important for the politics of South Asia. Pakistan Prime Minister Imran Khan has broached the subject of Kashmir with Trump three times. Trump also talked about mediation. It is possible that during this visit he may assure India that it is with Kashmir.

Some things can also happen about Iran. Trump knows that India and Iran’s friendship is very old. Trump will not make any statement that will create problems for India because the US is in great need of India. For one, it has to deal with China which is not possible without India, and the other is the issue of Afghanistan. Trump knows that India’s role in Afghanistan is going to be important. It is obvious that if Trump wins again, he is going to need India a lot in the second term. That is why he is coming to India. On February 24, India will ask him in Ahmedabad: ‘Kem Chho Trump!’

Donald Trump’s visit to India is also linked to the US presidential election. Will he really benefit from it? However, it is certain that the Indian community in the US is very strong and Trump is trying to woo it. 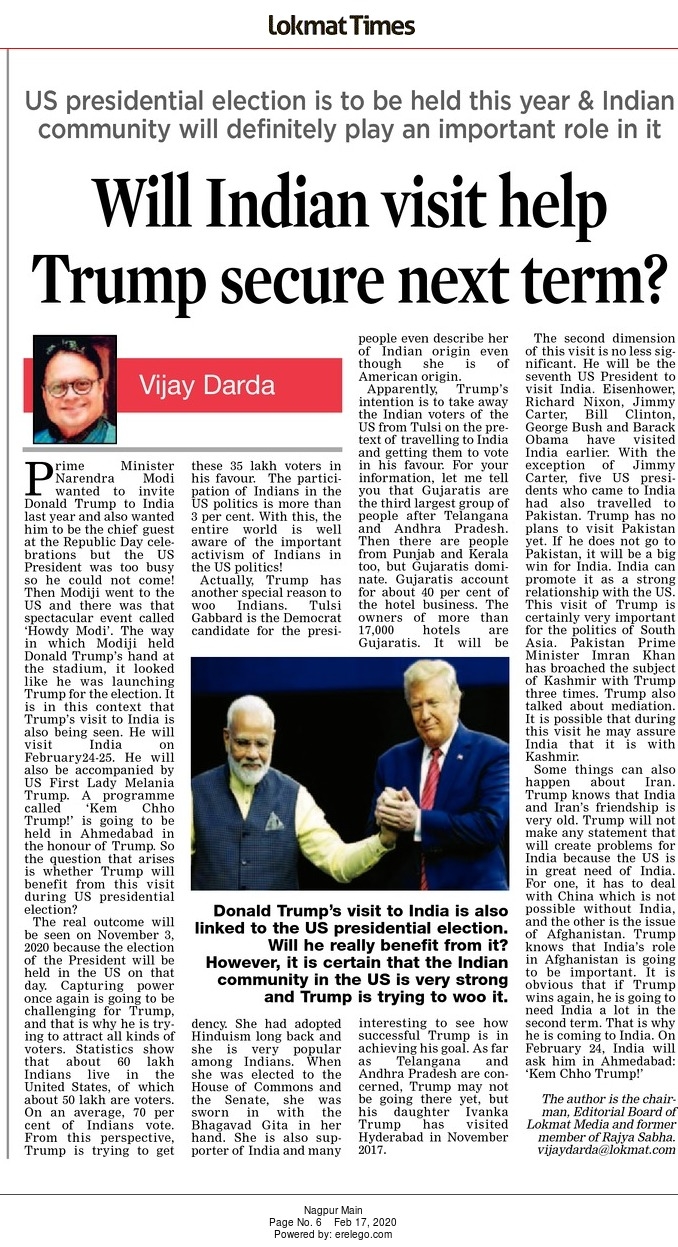 The spectre of Trump presidency