Will Rahul Gandhi’s yatra pay off?

‘Bharat Jodo Yatra’ has raised expectations, but will this pan-India yatra provide the much-needed ‘Sanjeevani’ to Congress?

Congress’ ambitious ‘Bharat Jodo Yatra’ covering 12 states and two Union Territories has got off to a flying start. Rahul Gandhi is on a padyatra and will cover the prescribed distance every day for about five months. The total length of the yatra is 3,570 kilometres. Such a long yatra is not an easy task, but with Rahul Gandhi taking over, his aim is certainly to revitalise the Congress. The million-dollar question at this time is, will Rahul Gandhi be able to convert the yatra into much-needed ‘Sanjeevani’ for the grand old party.

Officially, the Congress’ ‘Bharat Jodo Yatra’ was flagged off from Kanyakumari. But prior to that, Rahul Gandhi went to Sriperumbudur and paid tributes to his father Rajiv Gandhi at the memorial, so people believe that Sriperumbudur should be considered to be the actual starting point of the yatra. Rajiv Gandhi was the person who took charge of the country after the martyrdom of Indiraji and got 404 seats in the Parliament in the Lok Sabha elections that followed. Of course, there was a sympathy wave after the assassination of Indiraji, but the people also had great faith in Rajiv Gandhi and Congress. But today, the same party is battling the crisis of confidence. The roots are being uprooted. In such a situation, high expectations from Rahul Gandhi’s yatra is quite natural.<

Apart from cities like Thiruvananthapuram, Kochi, Mysore, Bellary, Raichur, Nanded, Jalgaon, Indore, Kota, Dausa, Alwar, Bulandshahr, Delhi, Ambala, Pathankot and Jammu, ‘Bharat Jodo Yatra’ will cover thousands of towns and villages enroute. The yatra will culminate in Srinagar. It is natural that wherever the yatra will pass through, it will infuse enthusiasm among the party workers. It will give rise to new hope. I have always been saying that Congress is the only party with roots in each and every village of India. Those roots need to be watered. The barren land requires manure and water for revitalisation. One should never give up hope of reviving the plant no matter how dry it may have become. But all this is not easy. The enthusiasm and excitement generated among the party workers during the ongoing yatra need to be converted into energy. There is a need to instill confidence among the workers that the party is changing for the better. The voice of the workers will now be heard. The talk of organisational elections in Congress is also a good indication. Hopefully, the party will get a full-fledged president soon. Any confusion about the commander always affects the entire army.

Rahul Gandhi’s yatra may be political, but everyone is feeling the need to unite India the most. There is an atmosphere of restlessness everywhere. The nation is grappling with the blinkers of religion which is not good for the nation. Even if a single person belonging to a minority community has any doubt in his mind about his rights, it should be redressed. The Indian Constitution has given equal rights to everyone. Be it rich or poor, the Constitution gives everyone the right to live according to his/her belief and needs. A poor person should never feel that he is being discriminated against due to caste, religion or poverty.

Let me tell you about an interesting experience. When HD Deve Gowda was the Prime Minister, I accompanied him to Harare, the capital of Zimbabwe. The total number of Indians there was not even 3,000. But I came to know that the government there celebrates Diwali with pomp so that no one feels inferior. I was stunned to see the Krishna temple there! It conveys the message that no citizen should look at the country from the prism of his religion. Can you see Field Marshal Sam Manekshaw, General Cariappa or Dr Abdul Kalam or other great personalities like them through the prism of religion and caste? Not at all! All are Indians. Be it a Hindu, a Jain, a Buddhist, a Sikh or a Parsi, or a Muslim, we are all under the tricolour and this tricolour is our life. Nothing is more important than the tricolour.

So let us get back to Rahul Gandhi’s ‘Bharat Jodo Yatra’! The basic issue is how fruitful will this yatra be? Before uniting the country, it is necessary to pay attention to how much will the goal of uniting the Congress be accomplished. The workers feel that due to the satraps, no one cares for them. Will these satraps be ready to do away with the party’s custom of settling scores with each other? Are people with him ready for the hard work that Rahul Gandhi has set out to do? The million-dollar question in the minds of the workers is whether Rahul Gandhi will change himself. Will he be accessible to the district and state leaders? Congress has lost two Lok Sabha elections under his leadership. Will Rahul now throw himself head and soul into the party work? Will he be amenable to the voices of criticism? I don’t care what T-shirt Rahul Gandhi is wearing or how luxurious a car he is using to relax! Everyone has it! The basic question is what message are you conveying? Rahul’s message is Bharat Jodo or unite India but the questions and doubts still persist in the minds of the workers. That’s why some people have already started teasing: Kahin aage paath aur pichhe sapaat na ho jaye! 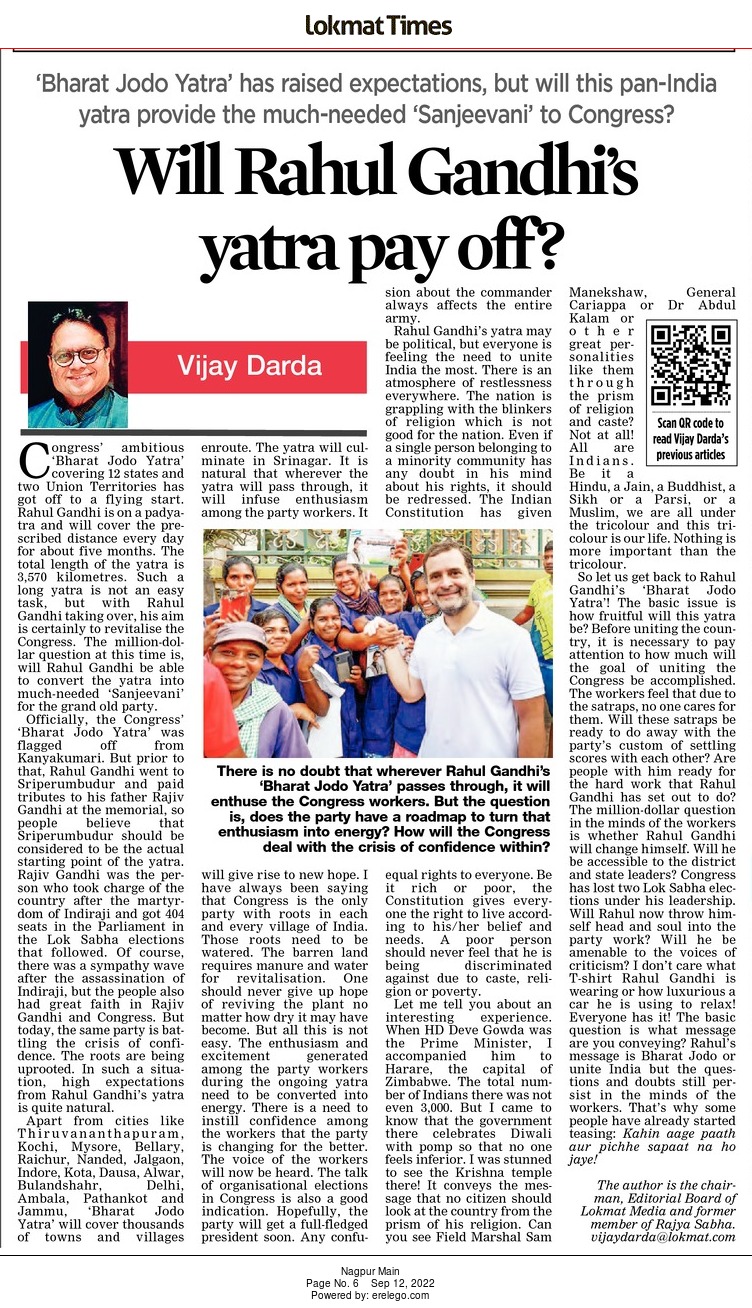 Why has the UN become a fiefdom of some countries?