Will we hand over ruined world to our posterity!

The world engaged in the race for power has waged a relentless war against nature. If nature does not survive, we will not survive either.

I was performing ‘Pratikraman’ (introspection) on the occasion of Paryushan Parva and felt that this festival embraces the entire environment. I was seeking forgiveness from all the creatures of water, land and sky. I was asking for forgiveness from human beings, I was asking for forgiveness from trees, birds, insects and moths and also from animals. While doing so, a question came up in my mind that while we worship the five elements, do we practise it meaningfully in day-to-day life? Why has man deliberately waged a war against the nature? Every loss of nature is our loss, then why are we hoisting with our own petard?

I am always in a state of contemplation about the environment and it worries me that the craving of the present generation of human beings is causing huge damage to the environment and we are not only suffering because of it, our children are suffering too. I don’t understand how much of a ruined world we will leave for the generations to come. Environment is the most important subject for me. There are many people like me who care about the environment but there is a large section that doesn’t care! This world is heading for destruction. We do not even think about how much carbon dioxide we are emitting even personally. When I look around myself, I am amazed. In my institution, my offices are visited by so many people. Some come by car and some by motorcycle. How much carbon is being emitted! This emission can be reduced if public modes of transport are available. If many people ride in a bus or train, the emissions per person will be less, but if one person is going by car then it is unfair.

When I used to look at the operation of machines in the printing press of my institution and the consumption of electricity in the offices, I used to think that this electricity is made from coal and how much carbon is being emitted from it. This concern turned us towards solar energy and we are using solar energy to print newspapers. Yes, we have to invest heavily for this, but we take comfort from the fact that we have taken steps towards environmental protection.

Actually every person will have to be concerned and many options will have to be adopted at the personal level. We can’t rely only on the government. Even our small efforts can be effective. Take, for example, the need to prevent food wastage. Statistics show that about 70 per cent of food grains and fruits are wasted. During the production of cereals and fruits, the electricity used in irrigation or the production of pesticides causes a lot of damage to the environment. What a benefit it would be if we could save grains and fruits from being wasted!

There have been many conferences on the environment under the banner of the United Nations. When the conference was held in Geneva, more than a hundred countries had agreed to save the environment. This resolution was also repeated in Rio de Janeiro and Paris. In 1994, it was decided that by the year 2000, carbon emissions in the world would be brought down to 1990 levels. In this task, developed countries will help developing countries financially and technologically. But what happened? The agreement was left in abeyance! Even in 2019, the then US President Trump broke the Paris Agreement on global warming. On the other hand, it blamed India, Russia and China that these countries are not doing anything and American money is being wasted. But the fact is that America is not even allowing the appointment of an inspector who audits carbon emissions in the world. Surely America has inflicted the maximum damage to the environment, so it should pay for it too. The compulsions of developing countries also have to be taken into account. If you work, a lot will go wrong but that doesn’t mean you should point your finger at it. Five, ten, fifteen or twenty per cent errors will occur but 80 per cent of good things will happen!

As of now, the situation is extremely worrisome. Forests are being annihilated. Rivers are drying up, the atmosphere is getting polluted, the ozone layer is getting thinner and mountains are getting washed away. Many animals have become extinct. Diseases are on the rise. It goes without saying that the destruction of the environment means the destruction of the human species! Can any of our government units today say that they are not harming the environment? We all have to find a way to get better because we have done this destruction! You will remember the period of lockdown when people were locked in their homes, the nature started becoming so wonderful. We may not impose a lockdown but change the behaviour! Just think, what kind of world will we leave for our posterity?

At present I am in Switzerland. There is no air pollution here. Rivers are flowing smooth and clear. The lakes are absolutely clean. There is an excellent system of disposal of medical waste. Trash is nowhere to be seen. I talked to the local people. They say this is our responsibility. If only this kind of thinking developed all over the world! Everyone should be concerned about the environment and think about how to make this world a beautiful place to live in! 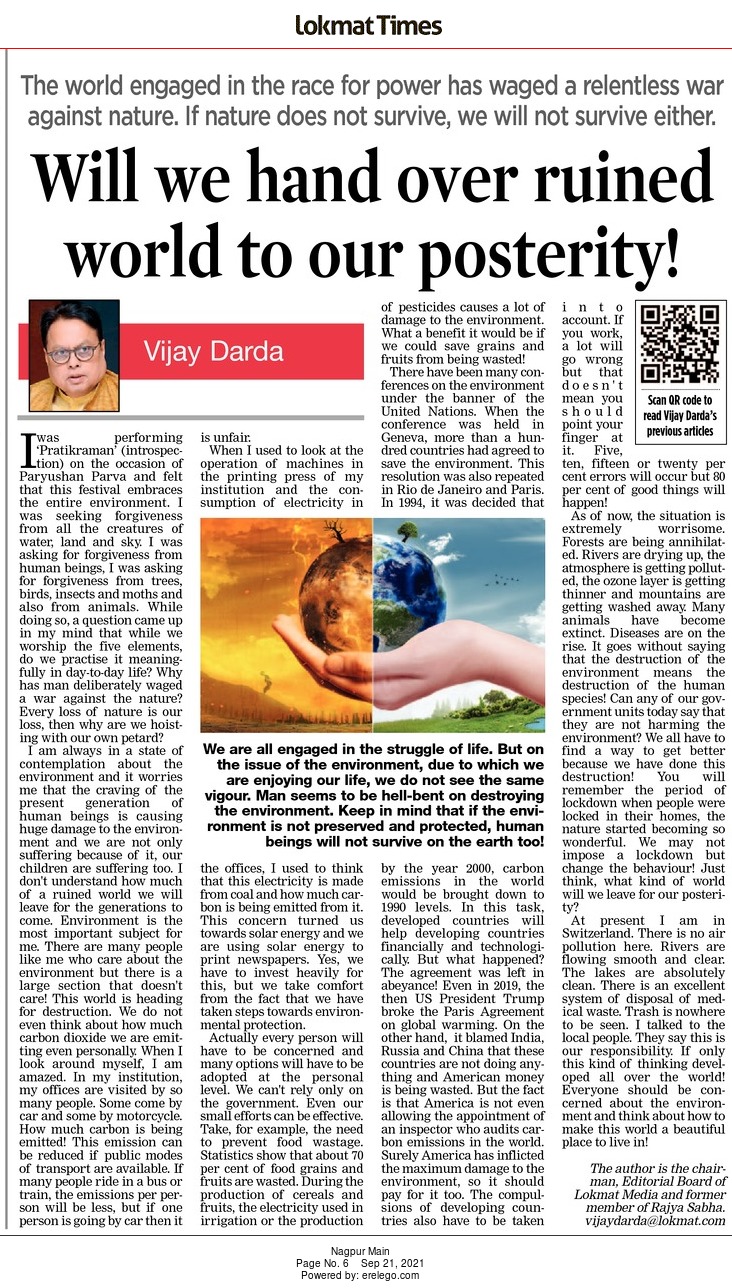