Historic, brave and long-awaited step by Modi-Shah duo for Jammu and Kashmir

I am fully supportive of the decisions taken by the Narendra Modi government on Jammu and Kashmir and which have been passed by the Parliament of the country. The valley has been on the boil for over three decades and all efforts for peace have failed. The need for such a big step was felt for years. The whole country was constantly questioning why the rules of law are different in Jammu and Kashmir. Why were there two statutes and two flags in one country? Why can’t anyone buy land there?

With the Modi-Shah duo abrogating the provisions of Article 370 with great courage, all these questions have petered out. Now Jammu and Kashmir is the same as the rest of India. At the same time, Pakistan, which has been fanning trouble in Kashmir, also got the big message that it should better control itself. The message was also conveyed to the world that India is capable of resolving its internal issues. The good thing is that the world has understood India’s stand on Jammu and Kashmir. No specific voice of protest was heard from anywhere. China’s response is natural because Pakistan has handed over a large part of Kashmir to it. I am happy that Amit Shah, in his reply in the Parliament, said with great conviction that Jammu and Kashmir means Kashmir which is occupied by Pakistan and Ladakh also means the territory which is under Chinese occupation. I support Amit Shah’s view. We must get our part of land!

However, the Pakistan-sponsored terrorists have left no stone unturned to turn our part of Jammu and Kashmir into virtual hell, but now we should expect that this part will become a paradise again. Amit Shah in the Parliament and Prime Minister Narendra Modi while addressing the nation have also assured Jammu and Kashmir that the government will turn the area into a paradise. But right now we have a big challenge of handling the present situation.

I would like to say one more thing here. Pandit Jawaharlal Nehru is being criticised vis-a-vis Article 370, but this is not right. It was a decision made in the context of the prevailing times and circumstances, and should be viewed in right perspective. On the canvas of time, there are many other decisions such as the nationalisation of banks, which some people may question today, but it was necessary at that time for the development of the country. There should be no doubt on one thing that none of our Prime Ministers has ever taken any decision against the interest of the country. How can we forget Nehruji’s contribution for the development of the country? My opinion is that we should honour our great men.

However, Jammu and Kashmir is presently under the shadow of security forces and peace prevails. The National Security Advisor Ajit Doval has tried to convey the message that the government understands the sentiments of the people and wants to restore peace in Jammu and Kashmir by meeting some people in Shopian and having lunch with them. Ajit Doval’s move is truly commendable. This is what the people of Kashmir want too, but the problem has been that the leaders of some political parties and separatist groups have made the atmosphere so bad that whenever peace effort is made, the atmosphere is vitiated. What will be the result of the government’s new approach is still unknown but we should always hope for the better.

The people of Jammu and Kashmir as well as the whole country will have to try to improve the atmosphere there. After the abrogation of the provisions of Article 370, a particular section is viewing it as a victory. A victory campaign is being run on social media. It is not right. The abrogation of the provisions of Article 370 was the need of the hour. It is neither anyone’s victory nor defeat. We should not do anything that will hurt the feelings of the people of Jammu and Kashmir. Keep in mind that minorities should never feel insecure. Kashmiriyat must remain intact at all times. Their culture, music and language are unique. Kashmir is our crown. The glow of the crown must remain intact! Let us all pray that peace returns to the valley, the houseboats of Dal Lake are full and the tourists return to the beautiful shikaras again. Let the apple orchards sway merrily and the fragrance of Kashmiri saffron spread in the whole country! May people from all over the world come to Jammu and Kashmir and enjoy the beauty of landscape and culture there!

Narendra Modi and Amit Shah have taken a bold decision by abrogating the provisions of Article 370 in Jammu and Kashmir and dividing the state into two UTs. I support this step. Yes, it is necessary to ensure that no one acts in a manner which will hurt the feelings of the people there. 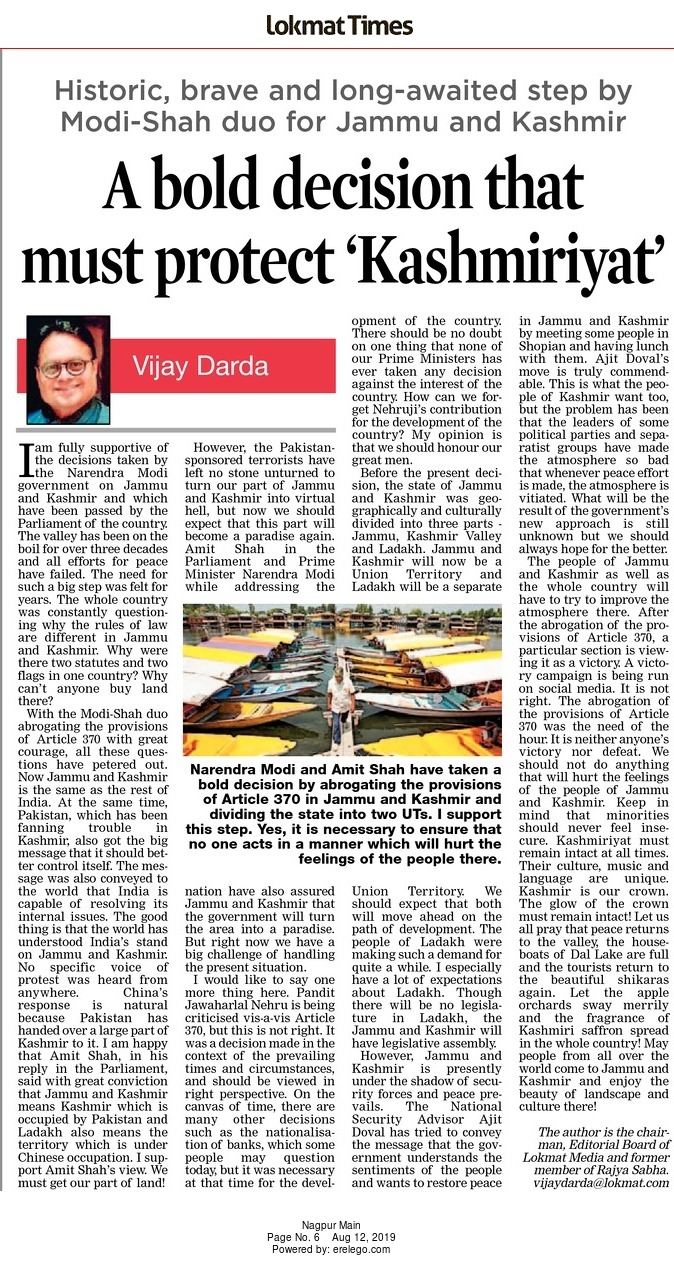