As Prime Minister Narendra Modi landed at Leh airport early on July 3, his visit became a talking point the world over. It was a surprise visit. No one had any clue until the previous night. The world tried to explore the possible significance of the visit. He was accompanied by the Chief of Defence Staff General Bipin Rawat and Army Chief General Manoj Naravane.

Though Modi’s visit may appear to be unexpected, it was undertaken with a clear-cut purpose: To boost the morale of our soldiers as well as send out a clear message to others that toying with India’s sovereignty will not be tolerated under any circumstances. Like a skilled politician, he made it clear without referring to China that the era of expansionism is over. In the last century, expansionism itself destroyed mankind. If anyone insists on pursuing the policy of expansionism, it should be construed as a threat to world peace. The era of expansionism has come to an end. This is the era of development.

Modi spoke to the soldiers on the front line at Nimu at a height of 11,000 feet and went to Leh Hospital to meet the Indian soldiers who sustained injuries in clashes with the Chinese soldiers on the night of June 15-16. The soldiers must have felt motivated and rejuvenated during the interaction with the Prime Minister. When the head of the family puts his reassuring hand on the shoulder, it naturally boosts confidence. This is what Narendra Modi has done. Not only did he appreciate the indomitable courage and valour of the Indian Army’s XIV Corps’ jawans stationed there, stating that spending on the development of infrastructure in the border areas has been tripled, Modi also gave them a message that the country is committed to do away with the problems faced by them.

This is not the first time Narendra Modi has visited and interacted with the soldiers. After becoming Prime Minister, he celebrated his first Diwali in 2014 with soldiers in Siachen. After that, he reached out to the soldiers on at least six occasions. However, it is not that only Narendra Modi as the prime minister has reached out to the soldiers on the border. Pandit Jawaharlal Nehru, Lal Bahadur Shastri and Indira Gandhi had many a time motivated the soldiers by going to the border and interacting with them. Indira Gandhi’s visit to Leh in 1971 is still remembered as she divided Pakistan into two just after that. Rajiv Gandhi also spent time with the soldiers on many occasions as prime minister and boosted their morale. Not only this, Yashwantrao Chavan, who became the defence minister just after the war with China, used to meet the three services chiefs every day and go to the border every week.

Nonetheless, this statement by Modi evoked a reaction in China. Chinese Embassy spokesperson Ji Rong said, “China has demarcated the boundary with 12 of its 14 neighbouring countries through peaceful negotiations, turning land borders into bonds of friendly cooperation. It is baseless to view China as “expansionist” by exaggerating its disputes with neighbours.”

Here, I would like to tell you that geographically the world’s third largest country China shares 22,000-kilometre boundary with 14 neighbouring countries. For comparison, let me tell you that if you travel from one end of the earth to the other, the distance is 40,000 kilometres. These neighbours of China are North Korea, Kazakhstan, Russia, Kyrgyzstan, Vietnam, Mongolia, Tajikistan, Afghanistan, Pakistan, Nepal, Bhutan, Myanmar, Laos and India. Of them, the dispute with Bhutan continues but the serious dispute is with India.

Historically, China was not our neighbour until 1950. There used to be a country called Tibet between us and our friendship with Tibet has been well known. When China occupied Tibet, it became our neighbour. In 1954, Jawaharlal Nehru and Chou En Lai signed the Panchsheel doctrine with the slogan ‘Hindi-Chini Bhai-Bhai’ to establish peace in the region. On the other hand, China stepped up oppression of people in Tibet. Finally, the Tibetan religious leader Dalai Lama left Tibet secretly and reached India on March 30, 1959 via Arunachal Pradesh. India granted asylum to the exiled government of Tibet, headquartered in McLeodganj, Himachal Pradesh. Since then, China has bred bad blood and hostility towards India. You all know about the subsequent 1962 war.

The world knows that in 1962 our priorities were different. Since we are apostles of peace, we did not spend on defence. We did not even suspect the malafide intentions of China. Thus, we were misled and deceived, so we lost. The valour of our soldiers still echoes in every inch of the land from Arunachal Pradesh to Ladakh. Who can forget the great epic story of Jaswant Singh Rawat of Pauri Garhwal? He snatched a machine gun from Chinese soldiers and killed 300 of them with it in 72 hours. China should understand that it is not the India of 1962. We also have plenty of resources and extensive experience of war, whereas China does not have this experience. Our soldiers are able to give a befitting reply to the Chinese. China should understand that it is neither the India of 1962 nor the world of 1962. Today, the whole world is with India.

However, I don’t think there is going to be any war. There will be an economic war. The government has done a great job by banning 59 Chinese apps. Some ministers have talked about not giving work contracts to Chinese companies, but such a decision should come from the Indian government. We should stop all economic dealings with China. If we face any problem, we should be ready for it; only such a resolve will pave the way to self-reliance. For, Make in India and Made in India are the only options!

Prime Minister Narendra Modi’s surprise visit to Ladakh has boosted the morale of the soldiers. It has also sent out a message to China that India will not bow down to its transgressions. Moreover, the government has banned 59 Chinese apps. Now, all economic dealings with China should also stop. We may feel the pinch but it will pave the way to self-reliance too. 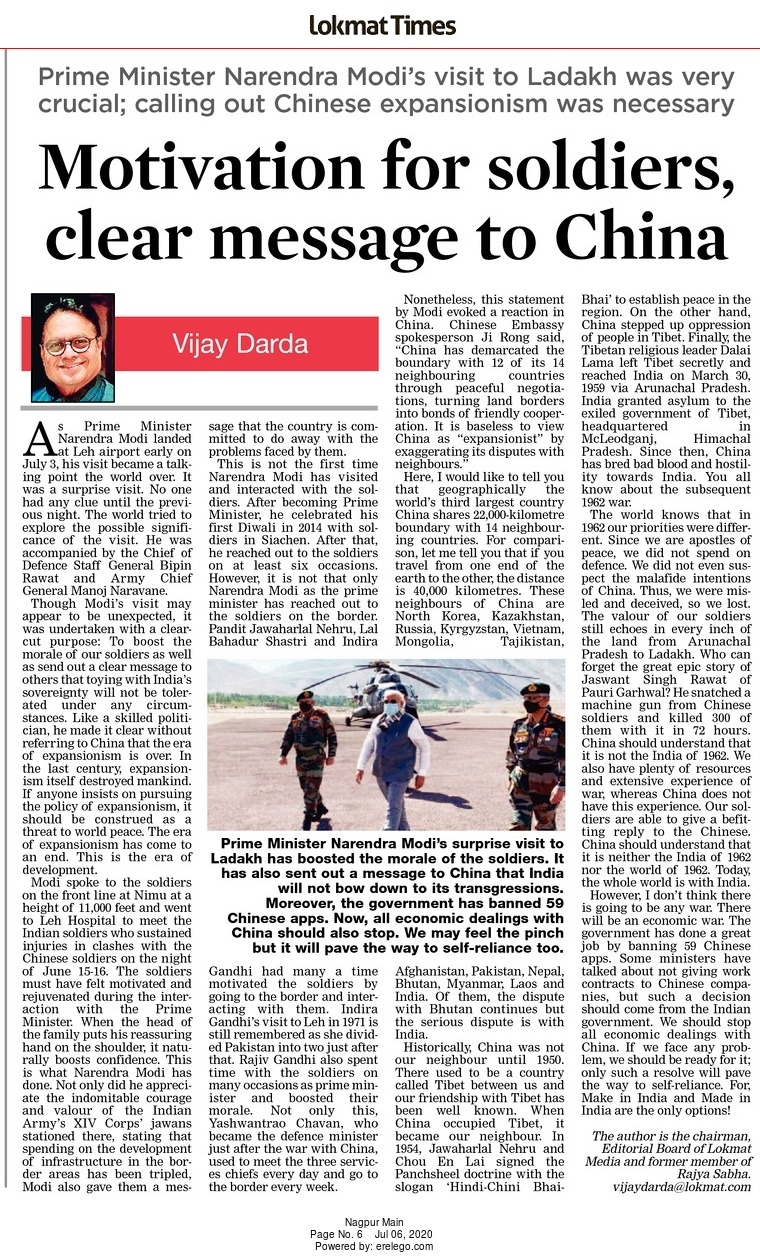 When soldiers perish under snow