A less sensational CAG would be better

In the post-Anna Hazare anti-corruption agitation phase, there is an increased public sensitivity on all these issues. So, the normal parliamentary processes are also being short-circuited, and there is a public hue and cry even when there is a whiff of a scandal.

All of us know that there is a set procedure about the manner in which the reports of the Comptroller and Auditor General (CAG) have to be dealt with. The reports are actually submitted to the president, and then tabled on the floor of the parliament. After this, these reports go to the Public Accounts Committee for further examination, and the action is then reported back to the parliament. Depending on the recommendations of the PAC, necessary follow-up action is taken against those held responsible for lapses if any.

However, now all this seems to be something that belongs to a bygone era. Now, we have witnessed a scenario where the reports of the CAG have been leaked, and there is reason to surmise that these are deliberate leaks, and not the outcome of some enterprising investigative journalism, (because this is always accompanied by some rigorous questioning and not the meek acceptance of the leaks as the gospel truth) that have taken place with the avowed objective of embarrassing the government. Then there have been televised press conferences that have naturally cashed in on the sensational bits mentioned in the leaked CAG reports. We have witnessed instances of the draft reports being leaked to the media and then all is accompanied by a process of trial by media.

There seems to be a fair argument in the favour of this abandonment of the usual processes. This is buttressed by the empirical perception that the usual route has so far proved ineffective in tackling corruption. So, it is time to attempt some quick fire repair jobs. It is also being argued that but for this enterprise on the part of the CAG and the media, the 2G spectrum scam as it has come to be known would not have been unearthed and the loot of the public wealth would have continued. I have no quarrel with this argument, nor do I wish to dilute the pleasure of those who are enjoying the ‘fruits of this victory’.

But I wish to submit a different line of argument. This is based on my experience as a parliamentarian, and as a believer in the system of checks and balances that has been so assiduously built into the scheme of things by the founding fathers of our constitution. Everyone has a well-defined role, and no one is expected to cross the laxman- rekha. The CAG is an auditor, and that’s about all. It is not in its domain to question government policy. The edifice of the entire 2G corruption scam is built on the premise that because the auction route had not been followed, national exchequer suffered a presumptive loss of Rs 1.76 lakh crores. Now, whether to follow the auction route or to use the ‘first come first serve’ option is entirely a policy matter quite outside the domain of the CAG.

Indeed, the Joint Parliamentary Committee that was so vociferously demanded by the entire Opposition is now going into this matter, and as the proceedings in the 2G case continue before the courts of law, we have even the TRAI (Telecom Regulatory Authority of India) asserting that there is no way to calculate the presumptive loss. Besides this, there is the realistic viewpoint that people cannot be damned as corrupt in full public view on the basis of crimes of assumptions. For someone to deserve a real punishment, he or she should have committed a real crime, and not just be assumed to be a criminal.

Now, apart from identifying the wrong- doers, an important role of the CAG is to institute a system that avoids similar mistakes in the future. In the 2G spectrum case, notwithstanding the high profile media attention that it has attracted, the CAG has failed to set up mechanisms that would ensure the avoidance of similar mishaps in the future.

Similarly, the latest CAG reports related to the KG Basin, and the functioning of the Air India also bring to the fore similar questions. In the KG Basin case an impression has gone round that after the leakage of the draft reports, the CAG has gone soft on Reliance, and in the case of Air India its findings are contradictory largely because it has not unearthed any accounting goof ups or revenue losses but entered the domain of policy decision making. No one should come to the conclusion that the CAG is being criticised or is being damned for creating high profile issues related to corruption. Indeed, it is accepted that this is one of the major mandates of the CAG. But the grievance is not doing enough to put in place systems that would address the systemic problems, and is unfortunately banking on the more sensational aspects of its work. I would like to serve a cautionary warning as well. The level of corruption in the country keeps going-up when it is discovered that even after some high profile cases have done the political damage, there are no systemic changes in place. We must make a difference between deriving political mileage from the issue of corruption, and creating a system that reduces corruption. Unfortunately, as a polity we have excelled in the first part, and miserably failed in the second one.

The CAG has a history that dates back to more than 150 years, but it is unfortunate that we hear about its work only when there are attempts to derive some political mileage from it. We all remember that it was talked about quite actively when the Bofors controversy had emerged, and now we have this 2G spectrum scam. The politics of Bofors is quite well known and does not need any recounting, but it is not generally known except in defence circles that after the Bofors controversy there was a slowing down of the decision making process because those incharge felt that it was better not to take decisions rather than face the complications of a decision that is questioned on various aspects after everything is said and done. Defence preparedness also suffered on this count. Then again we have recently heard Union home minister P Chidambaram telling us that several security- related decisions have not been taken because there is an apprehension that authorities like CAG would find fault with them.

In an environment where the nation is poised to grow at more than 8 percent, and decision-making has to be positive and innovative, it is also incumbent upon the CAG to move along with the times and come up with processes and systems that do not inhibit the creative impulses of the entire decision making machinery, but ensure that there are no violations of the laws and the guilty do not get away.

The CAG carries a big responsibility to the people of India. It has to ensure that the money belongs to the people is well spent, and that there are no leakages. As the size of the economy grows, the nature of this responsibility also enlarges. I feel sensationalism will certainly keep the CAG in the glare of the media. But I have my own doubts as to whether this would ensure an effective control over the institutions of the government. The CAG reports are read only when they have an element of sensation, or else these are forgotten.

These should be read and acted upon even when they do not have this element, and the responsibility for this lies also with the CAG, and the rest of the components of the system of checks and balances. 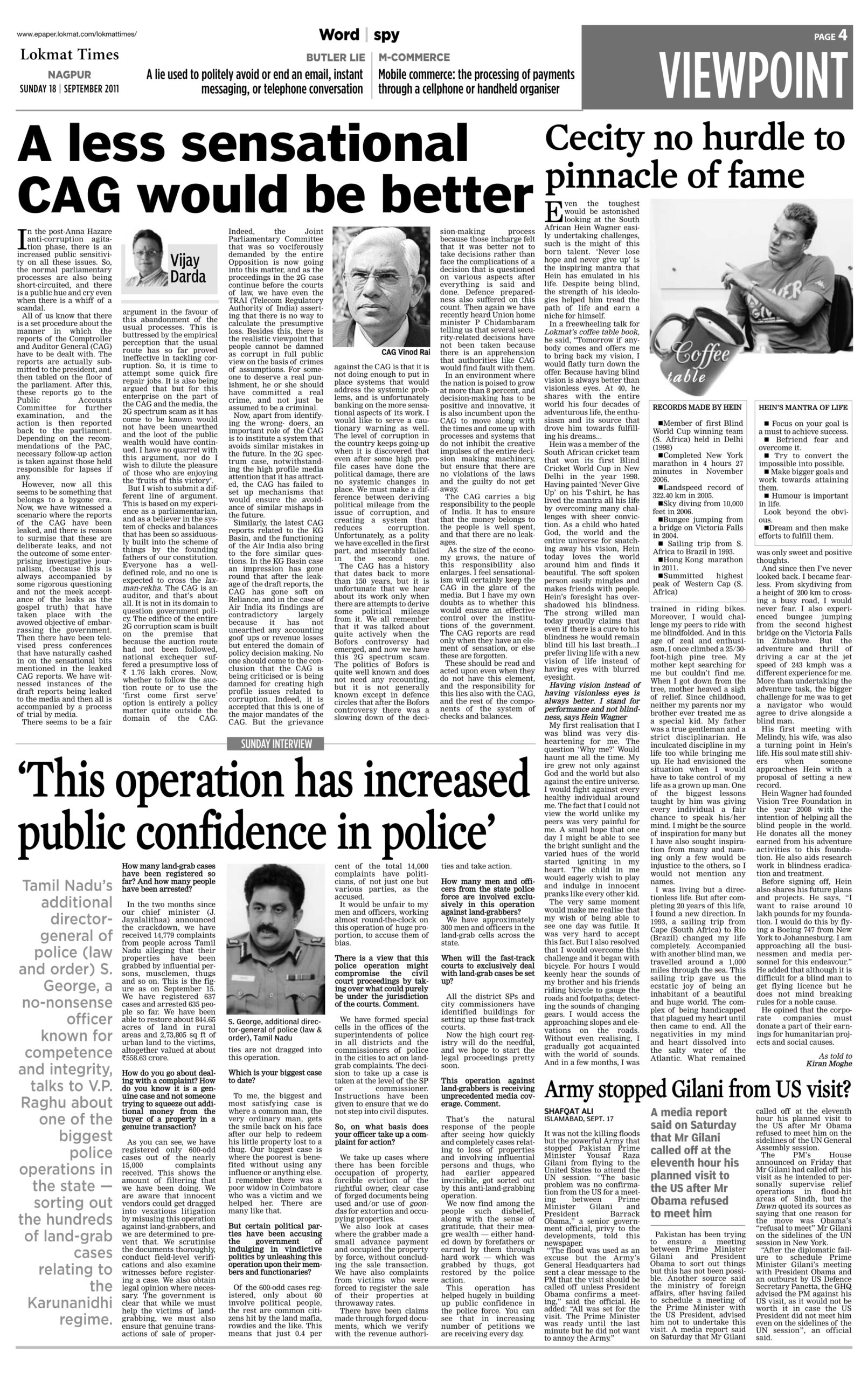 Why was action taken on mere suspicion?