There is hardly any person who would argue that we do not need to fight corruption. No one would claim that the public services are in the pink of health, and corruption does not eat into their vitals. Truly, corruption is a malady that needs an urgent cure. But the developments of the last few months have been bothering us parliamentarians, to no end. In the Monsoon Session, we all got together and debated this issue for one full day. At that time our hope was that the concerns raised by Anna Hazare and his supporters would be satisfactorily addressed, and then they would display the required patience to let Parliament discharge its responsibility of framing the law without any pressure.

But then Hazare and his supporters have been conducting themselves in public in a manner that raises doubts about their faith in parliamentary democracy. Not a day has passed since then when they have not issued a threat that Hazare would fast-unto-death unless the Jan Lokpal Bill suggested by them is passed verbatim.

They have made it clear on more than one occasion that nothing less than only their Bill would satisfy them. No one should find fault with us parliamentarians, if we conclude that this behaviour is dictatorial at its worst and antidemocracy at best. Surely, it would not be acceptable in any civilised society.

If we just cast a cursory glance at the daily dose of statements that has been coming out of the Hazare camp, then their tone, tenor and content simply smack of arrogance and an ‘Iknow- the-best’ attitude. Just because they have an ex-law minister in their ranks, should the entire nation concede that these five people know what is best for the country, and the rest of us have to be condemned to the sidelines as a corrupt lot, merely because we have a different point of view?

Personally, I feel that whatever its compulsions at that time the government seriously erred in appointing a joint drafting committee with Hazare and company, as its non-official members. The best course would have been putting the draft Bill on the internet and inviting a free and frank discussion. This would have taken care of all the aspects.

However, the constitution of the Joint Drafting Committee, unprecedented in our parliamentary history, proved counter-productive. It did not satisfy Hazare and his supporters. Moreover, instead of injecting an element of sobriety in the public discourse on the issue of corruption, it made the Hazare group members assume larger-than-life roles for themselves. This gave them an ill-founded legitimacy or else who has appointed them as the spokespersons for the entire 120 crore people, as they do not tire of telling us.

They have been using insulting language for the ministers and the government, even when the government and everyone concerned has been going out of the way to hasten the process of passing the Lokpal law. They have been unmindful of the fact that the ministers are public representatives and have the ultimate sanction of the people’s mandate in a democracy. Insulting them is equivalent to disrespect for the people who have elected them.

Indeed, it is this pressure from this group and its attitude towards the entire political class as well as the bureaucracy that has made a lot of MPs rethink on the entire issue. Whereas some of our colleagues like D Raja of the CPI and even Union minister Vyalar Ravi have openly said that there is no need to bow to the pressures of the deadlines set by Hazare and his group; in private almost 98 per cent of the MPs share this view.

Apart from other objections, their primary cause for concern is the ‘nonaccountable’ nature of the proposed Lokpal. Even while we accept the charge that there could be cases of corruption in high places, it is a revolt against the fundamental commitment to democracy so sacredly enshrined in the Constitution by our learned founding fathers that makes the whole Lokpal business unpalatable.

No Westminster type of democracy like ours can function effectively, if there is a body above the prime minister. Unlike the states, that have a provision for imposing the governor’s rule, if the chief minister has to step down, there is no such scope for an interim arrangement in case the prime minister’s position becomes untenable. A Lokpal that overrides the prime minister is a sure recipe for instability, more so during these times when the governments at the Centre are formed through coalitions that have a builtin element of fragility.

But Hazare and his supporters seem to care very little about this aspect, and this has led some of us to believe that their real intent is not to promote probity in public life, but to usher in an unstable democratic polity. Or else they would not be issuing these daily threats.

Then there is the time honoured process of framing laws. This is always a complex exercise that requires cool deliberation. The standing committee chaired by Abhishek Manu Singhvi has indeed performed an impossible task of coming out with a report on the Lokpal Bill that aims to reconcile the differing points of view. But then Hazare and his group have no appreciation of the hard work put in by this group of MPs drawn from all the parties. On the contrary, they lost no time in rubbishing these efforts and merely struck to their song that their draft of the Jan Lokpal Bill should be adopted. Indeed, a lot of us in Parliament also feel that Hazare and his supporters would continue to agitate even if the Jan Lokpal Bill were to be adopted by Parliament!

I also wonder as to why Hazare and his supporters do not pause to think about the suggestions from the other side, and assess the practical implications of their ideas. For example, take the inclusion of the Group C and D employees under the ambit of one Lokpal. What would be its impact? Would it not render the Lokpal ineffective as it would be simply crushed under the burden of lakhs of cases per year? Would it not require a mammoth bureaucratic machinery — admittedly bigger than the biggest department of the Government of India to handle these cases? Then what about the policing of this machinery?

So, would we require a Dharampal to oversee this Lokpal? What would be the cost implications of such a heavily staffed machinery? Who would ensure that this machinery is not corrupt? Or are we to believe that the Indians who would be working for the Lokpal would be some kind of aliens free from the malaise of corruption? We raise these points not because we are opposed to fighting corruption. We stress them for completely justified reasons.

We have a firm view that the ordinary people are put to difficulty because of the non-functioning nature of the Group C and D employees, as the bulk of the population engages with this segment of the government employees. But then the matter requires cool consideration. Besides, these are not idle rhetorical questions aimed at simply defeating the argument made by Hazare and company. Let no one be under the wrong impression that the government is against the Lokpal.

In fact, the easiest thing to silence Hazare and his supporters would be to accept the Jan Lokpal Bill as it is and then wait for it to fail in the due course of time. But then governments are not like street movements. They have to take decisions keeping the long-term impact in mind, and hence the process is time consuming.

Over the next few days, Parliament will surely debate the Lokpal Bill, and going by the intense backroom work that has been on now for weeks, we may even have the Bill passed. But even then doubts will continue to persist in our minds that by creating an authority that is not answerable to Parliament, but merely on the whims and fancies of a few stubborn men and women who have through design or by fluke invoked the name of the Father of the Nation, and donned a Gandhi cap without believing in his ideals of non-violence and self-restraint, have gone in for a remedy that is worse than the malady?

We will keep wondering, if we have not invited anarchy on the doorstep of Parliament? After all what prevents another self-styled reformist to muster the support of thousands on the streets, specially with a generous helping from ‘breaking news-driven’ media, and then holding Parliament to ransom? We still have a few days to reassert the primacy of Parliament, and we should not let this opportunity slip away.

At a personal level, I have always had a lot of respect for Anna Hazare, and the Lokmat Group of Newspapers has also been supporting his causes. Even on the issue of corruption, there is no difference of opinion, but then in search for a cure for corruption, we should not end up in discovering a remedy that is worse than the malady. As the wise men say, “We should not act in haste and repent at leisure”, so Parliament should not pass a Bill with someone holding the gun of a fast-unto-death to its head. 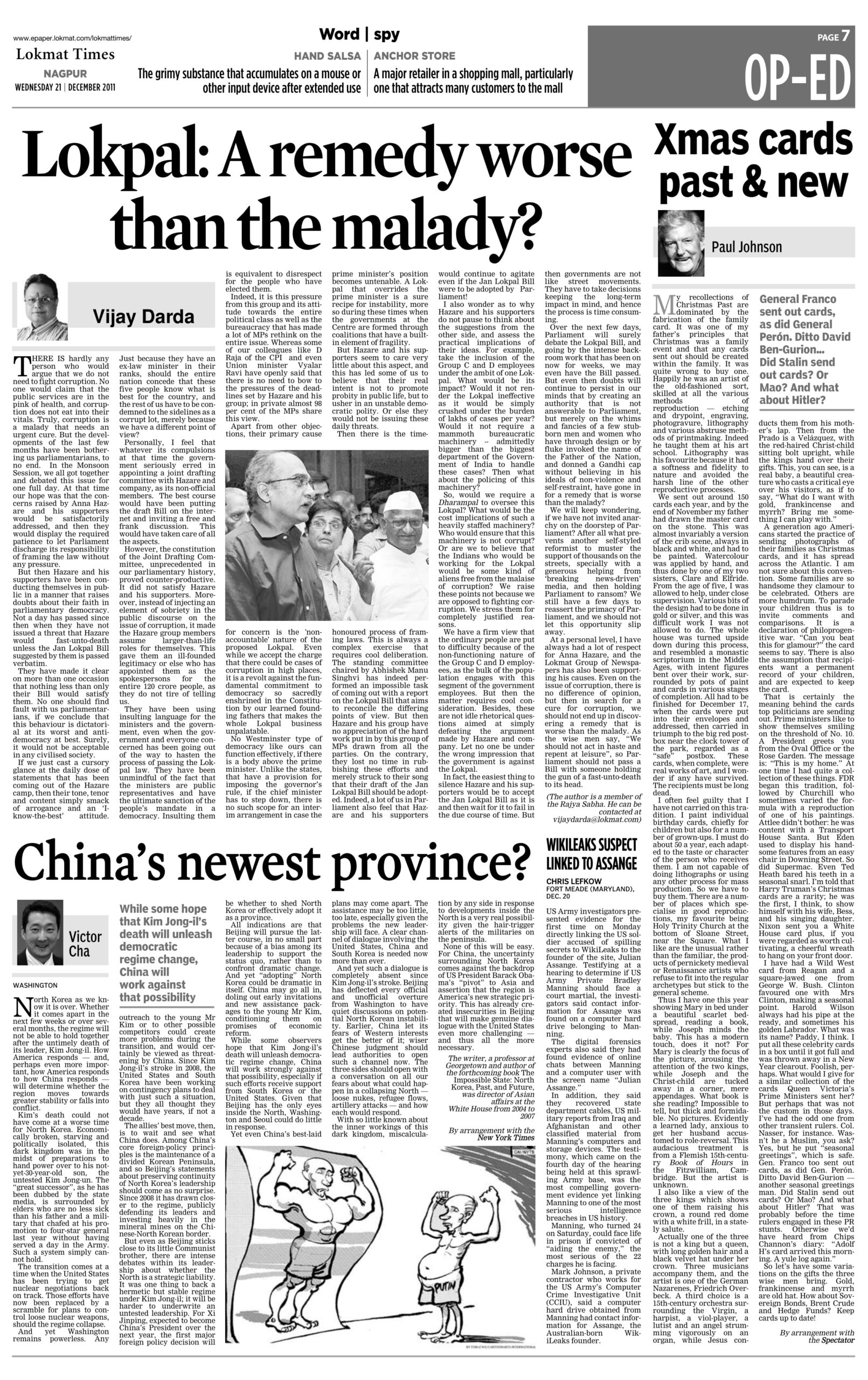