China has disbursed loan to the tune of Rs10 lakh crore in the last 18 years; 35 African countries walk in to debt trap

The conference of ‘Forum on China-Africa Cooperation’ held in China’s capital Beijing last week did not attract any attention in the Indian media, but this matter is directly related to India. India’s relations with African countries have always been cordial and harmonious.

But now China has been able to establish its dominance in the Afro-countries beyond the shadow of doubt. Evidently, this reduces India to being a silent spectator. The conference was attended by the heads of 50 countries of Africa, and all of them were effusive in their praise of China. Chairperson of the African Union and President of Rwanda Paul Kagame has gone to the extent of saying that China has understood Africa’s prominence and provided it opportunities for development. Paul’s speech is important because he has always been against foreign debt. China has befriended him too.

At the conference, Chinese President Xi Jinping pledged to increase the amount of loan by $6,000 crore, that is Rs. 4.32 lakh crore, to the African countries. Almost an identical amount has been given by China in the last three years. In fact, after the year 2000, that is in 18 years, China has extended credit line worth $136 billion, or about Rs. 10 lakh crore, to the African countries. Although China says it wants to develop Africa and it has no political motive, the entire world is aware of China’s design. China is not investing such a large amount of money without any purpose. Its twin objectives are clearly visible. First of all, if 50 African countries remain trapped in debt, they will dance to its tune in every activity at the United Nations. This situation would be unenviable for India because India always believed African countries to be helpful in its bid for permanent membership of the United Nations. These countries can also leave India at the behest of China. After all, most of these countries have broken ties with Taiwan at the instance of China!

China’s second major objective is to capture the African consumer market. China is also becoming successful in this endeavour. You can understand the situation from the example of Ethiopia. In 2000, India’s share in the total export to Ethiopia was 19.1 per cent. China’s share was 13.1 per cent. But in 2003 China left India behind. In 2012, China’s share was 31 per cent. After that, it has increased rapidly. India’s share is rapidly declining. Since the African countries are taking loans from China in large numbers, they have no other choice except to accept China’s terms. China is also getting back the big share of the loan that it is giving to them. In more than 35 countries of Africa, Chinese companies are building other infrastructure including dams, ports, roads, railways and bridges. That means China is also earning from there. It means having the cake and eating it too!

Most African countries have rich natural resources which have not been exploited due to technical weakness. China will try to exploit the resources by first obliging these countries with huge loans and then seizing their resources. These countries are not in a position to repay the principal amount, let alone the interest. Although China has held out the promise that the interest amount on the debt of the poor countries will be waived but there is no mention of it on paper. It is clear that if the African countries fail to pay the debt, they will be enslaved to China.

China has played the same game in Pakistan and Bangladesh and is now trying to play it in Nepal too. Nepal has so far been avoiding the Chinese debt trap. But if India does not take proper initiative, Nepal will also begin to take loans from China because it does not even have money to develop basic infrastructure. China has massive money power and it does not hesitate in investing the same. Contrary to this, the image of India is becoming that of being long on promise and short on delivery. Though we announce various schemes for neighbouring countries, we invariably take long time in fulfilling or completing them. Actually, it is time for India to be alert. It is a challenging proposition to maintain friendship not only in the neighbourhood but also with the African countries.

Though China’s ostensible purpose in indiscriminate disbursal of loan to African countries is to help them develop, the fact is that China is eyeing their natural resources and planning to expand its market. India should be worried and alert, lest these African friends will leave us! 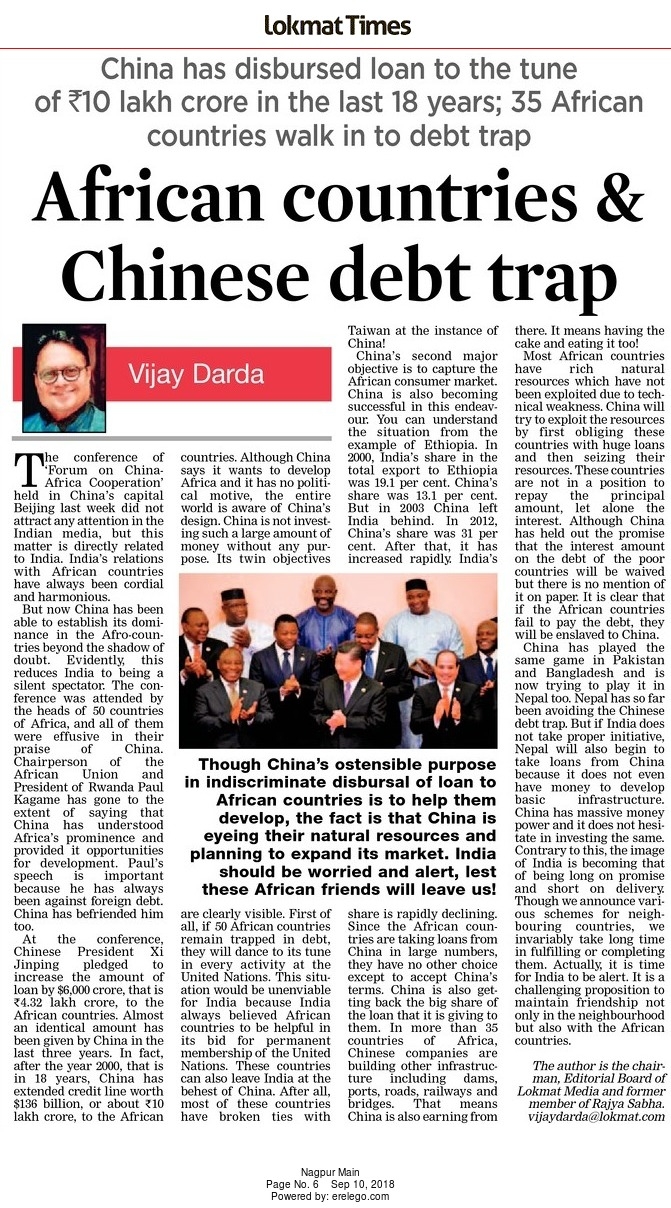