In olden days, the economic transactions were dominated by moneylenders. They would lend money to the borrowers who pledged their land. When the borrowers could not repay their debts, the moneylender used to grab their land. These days China has emerged as a new global moneylender. It has lent billions of dollars to countries across the world and lured them into its debt-trap. China is not only capturing its debtors’ natural wealth but also building its military base to strengthen its defence line. Last year, the World Bank and the International Monetary Fund also issued a warning to the countries of the world.

An analysis of the Harvard Business Review says that China has lent $1.5 trillion to 150 countries, but a report released in June 2019 on the World Economy by Germany’s Kiel University says that China has lent as much as $5 trillion. In fact, it is very difficult for anyone to find the right figures because the Bank of China and Exim Bank hardly ever publish real statistics, and there is no way to know how much loan China has disbursed among other countries from the back door. Experts believe that China has disbursed more loans than the World Bank and IMF.

China has lent liberally to most of those countries which do not get easy loans from anywhere. There are many countries such as Djibouti, Tonga, Maldives, Congo, Kyrgyzstan, Cambodia, Niger, Laos, Zambia and Mongolia, which owe more than 20 per cent of their GDP to China. China is not doing all this for charity. Its intention is to divest others of their natural resources in return.

Let us take the example of Sri Lanka. Between 2007 and 2014, Sri Lanka took a $1.26 billion loan from China in five phases for its Hambantota port project. The Chinese company built this port. Sri Lanka could not pay the debt and in 2017 it had to hand over the port of Hambantota to the Merchant Port Holdings Company of China for 99 years. Along with this, 15,000 acres of land had to be given.

China is repeating this model in Gwadar, Pakistan. China is spending 80 per cent of the amount on the $46 billion Sino-Pak Economic Corridor. This route leads to Gwadar Port. The Sino-Pak agreement is designed in such a way that China will get 91 per cent of Gwadar Port’s earnings for 40 years and Pak will get only 9 per cent. Pakistan owes China more than 14 per cent of its total GDP. IMF figures show that by 2022, Pakistan will have to pay $6.7 billion to China. Obviously, Pakistan will not be able to do this and Gwadar Port will be completely taken over by China.

China has also entered Maldives. Many of the projects India was working on have been bagged by China. China has also announced a huge loan to Nepal. In this way, China has surrounded India from all sides. It has captured one of the Coco islands of Myanmar in the Andaman Sea too. In 1994, China also set up a spy station to monitor the Indian Navy and India could not do anything. China is now engaged in surrounding Japan, the US and Australia as well. It has deployed both money and strategic power! On this debt-trap diplomacy of moneylending,

China started working so cleverly that the world could not understand anything. In the 1950s and 1960s, it started lending to small countries where there were communist regimes. The world foolishly thought China was doing this to promote communism. After that, China gained the leadership in manufacturing and made the whole world dependent on itself. It earned a lot of money from around the world and started distributing loans to the mineral-rich and strategically important African countries. These African countries are endowed with abundant natural resources. All of that is now the property of China. Before the world could realise the Chinese game-plan, China had already gone much further.

According to a 2018 report, African countries owed China a debt of $10 billion in 2010, which increased to $30 billion in 2016. Meanwhile, its process of disbursing loan continues unabated. Let’s try to understand the condition of Djibouti, an African country ‘occupied’ by China due to debt. The area of this African country is just 23,200 sq km and the population is less than one million. However, 80 per cent of its GDP is loan, in which China’s share is a whopping 77 per cent. China built its navy base there in 2017 at a cost of $590 million and Djibouti could do nothing. Chinese people have also been settled there. China has been following this policy in many countries. If a country tells the Chinese to go back, China starts browbeating it into submission.

We can understand China’s policy with another example. The UN’s Trade and Development Report says that in 2018, countries around the world reduced their investment abroad by 13 per cent compared to 2017, but during that period China invested 4 per cent more. The amazing thing is that China, which is disbursing so much money to other countries in the form of loans, is itself taking loans from the World Bank and IMF. In 2019, it took a loan of $1.3 billion from the World Bank at a low interest rate. Prior to that in 2017, it received a loan of $2.4 billion. US President Donald Trump has been constantly saying that when China is distributing so much debt, why does it need money? Despite this opposition, it has been successful in taking loans. It is clear that China takes loans at a cheap interest rate and distributes it at a higher rate.

China has imposed strict restrictions on the followers of Buddhism, Christianity and Islam ostensibly to protect itself from internal disputes. However, no Islamic country has raised even a squeak of protest. It is evident that China has tricked the world into its trap in such a way that it is very difficult to get out of it. Therefore, the need of the hour is for the whole world to show solidarity and come together to rein in the dragon strictly and with full force.

The US once dominated the whole world and played every trick in its bag to maintain its eminence on the geopolitical scene. But China is shrewdly spreading its empire even faster. It is also looting the wealth and establishing its military bases by getting the nations strategically important and rich in natural wealth into debt-trap. So the question is, how will the world deal with this domineering, wily moneylender? 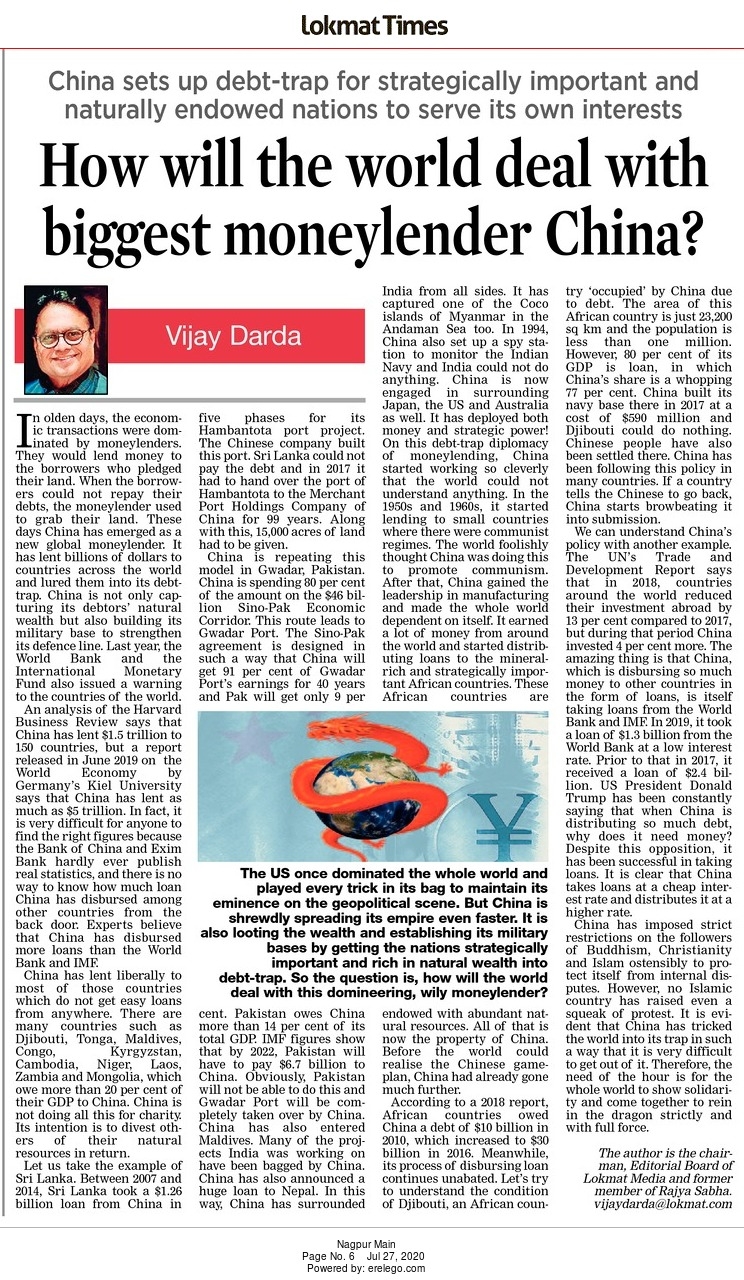