There was never any doubt about it, but you get a confirmation only when such things actually happen. So, Rahul Gandhi, the great grandson of India’s first prime minister Pandit Jawaharlal Nehru took over the leadership of the Indian National Congress last week. He is following the illustrious footsteps of his father Rajiv, and grandmother Indira Gandhi. Critics of dynastic rule have always ranted against this sort of transition of power in a democracy, but they miss one essential difference. In our country, political power comes only after people’s endorsement. So, like his mother Sonia, father and grandmother before him, he has to win the people’s endorsement. In this, he faces the toughest ever test within the next few months. As both the Indian democracy as well the first political family grow older, they contest between them also acquires newer and sharper dimensions.

In essence, this contest translates into getting a vote of confidence from the people. When people have elected the Congress party in the past, they have reposed faith in the leadership of the first family–Panditji, Indiraji, Rajivji and Soniaji. They have trusted them with the future of the nation above all the other seasoned politicians from the other side. The point to be decided in the next few months is would he stand this test of popularity and get the vote of confidence from the people?

True, like his predecessors in the family, he displayed a hitherto unknown streak of aggression and political skill when he delivered that speech at the All India Congress Committee’s one-day session. It did revive the sagging morale of the party, and the message was loud and clear. The Congress may be down, but do not underestimate it, and we are not going to give it up without a fight. It was also emphatically conceded that as a party, we have been in this situation in the past and we know our way out.

But as highlighted by the Congress president Sonia Gandhi this is a changed democracy. It is dominated by 68 percent of the youthful population below the age of 35 that has growing aspirational and in the face of an accepted inequalities of opportunities is not prepared to wait in an increasingly competitive environment. After 10 years in power, this generation is less likely to believe in the promises that would be forthcoming from the Congress, as the simple question they ask is why did you not do this for the past years when you had the power to do it?

This is not to deny the track record of the government under the leadership of prime minister Manmohan Singh, but to accept that there is an unrest among the younger generation, and also to underscore the fact accepted by some senior leaders at the AICC session that the people have not been convinced about one thing — the government did its best under the circumstances to solve the people’s problems. It is this sense of inadequacy that hurts the people. In this age of 24×7 news media that has far reaching consequences, this can be traced to a communication failure.

However, the problem is deeper than that of a mere communication failure. The Congress party is not like other cadre-based political outfits. It is essentially served now by people who are with it only as long as they believe that their interests are being served by staying with it. This was not the situation in the past. The Congress was served by people dedicated to the idea itself, and the time has come for its leaders to accept that this number is shrinking in the society. The challenge that Rahul faces in these tough times is to convince the Congressmen that their future lies in strengthening the party, and not just looking after their self-interests. The rest as they say could fall in place.

In this sense, the challenge for the Gandhi family and the Congress has been getting tougher through the years. After the loss under prime minister Narasimha Rao in 1996, and the six years of the BJP rule under a sterling prime minister like Atal Behari Vajpayee, in 2003 Sonia Gandhi faced the toughest task in reviving the Congress rule. Now, after 10 years of Congress rule with the burden of double anti-incumbency and all that it brings as a baggage, it is still more difficult and tough for Rahul Gandhi to ward off the challenge from a dramatically charged BJP that is backed by a coalition of forces that are pathologically against the idea of India as envisaged by its founding fathers. This is not just empty rhetoric, but the essence of the political clash between the two contesting claimants for power in the country. The RSS has backed Modi to the hilt in the BJP, and it has never made any secret of its desire that its vision of India is a Hindu Pakistan. It is because this vision is an antithesis of the idea of India as propounded by the Congress, it wants an India free of the Congress-Congress mukt Bharat. The RSS is aware that as long as the Congress remains, its idea of India cannot be implemented. But, we all know the fate of the Islamic Pakistan. Created more with fanatic zeal and less with an understanding of the construct of modern nations, it was halved within 25 years of its establishment.

Both, Sonia Gandhi and her son Rahul, have a clear understanding that the next election is actually a clash between the contesting ideas of India. The idea as represented by the Congress on the one hand, and that showcased by the RSS on the other. But the main question is can the rest of the party leaders grasp this essential political struggle and place it above their narrow personal and factional interests? Can they make it percolate down to the level of the parliamentary constituencies and win the contest? It is in this sense that the next election could be a big turning point in the history of our country. We would not only be choosing the colour of the next government, but the route that we shall be taking in shaping its future. 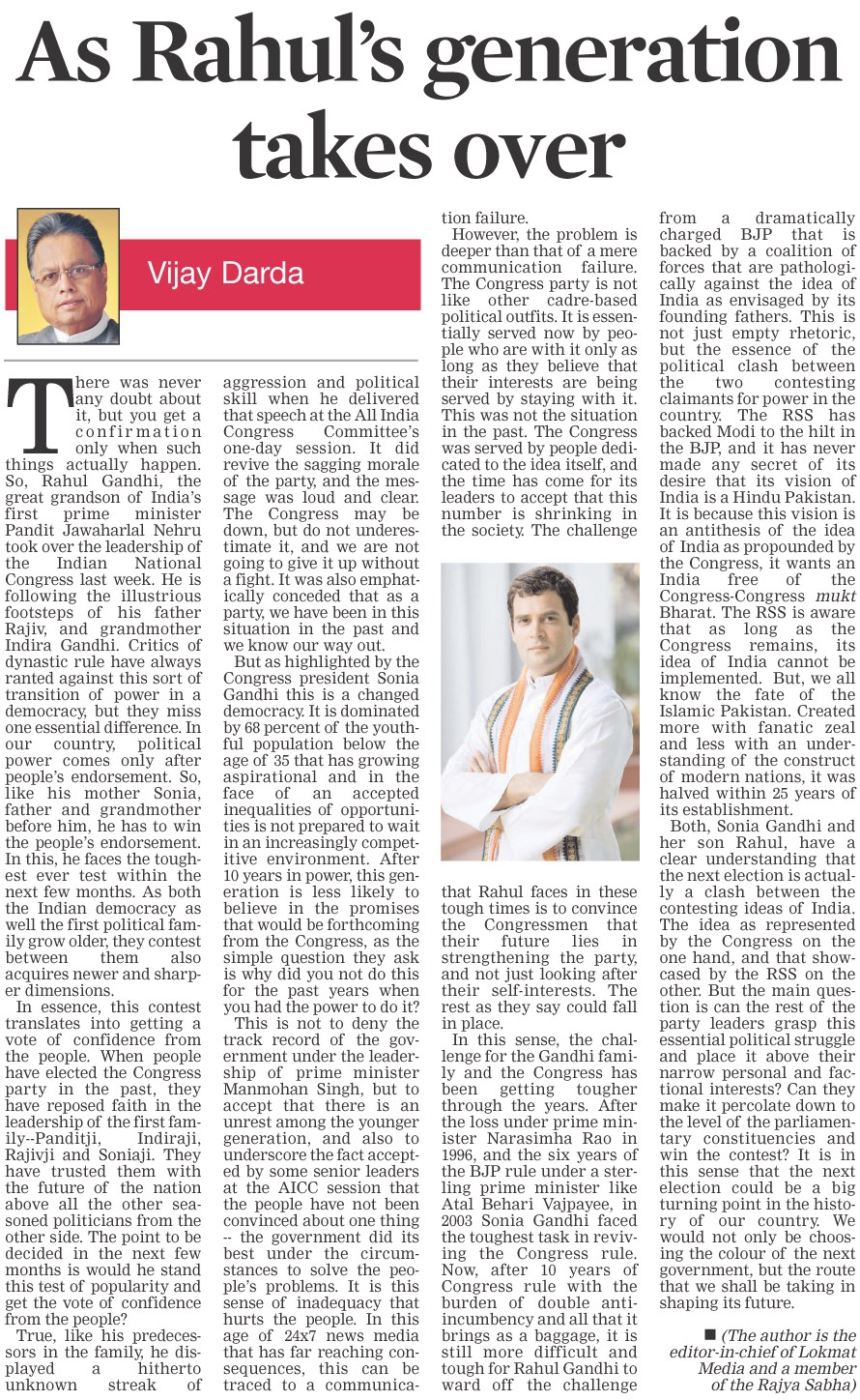