In Maharashtra, the Congress had neither planning nor the will to contest elections; the party candidates won on their own strength

Ever since I became politically savvy, I have not seen such an election when Congress simply gave up without even a struggle. Congress did not fight in this election. It had neither planning nor the will or passion! The Congress became a victim of complete frustration even though the party has a glorious history of putting up a struggle even in its worst times. I remember that after losing the election in 1977, Indira Gandhi was under an all-round attack from those in the power. The Congress had split and the party faction led by Indiraji was in a very weak position. The financial condition was poor. It did not have the resources. Meanwhile, in 1978, Maharashtra Assembly elections were held, but Indiraji and the Congress leaders of Maharashtra showed amazing spirit. She extensively toured Maharashtra and the results were good. After the election, the Congress forged an alliance with the rebel group and Vasantdada Patil became the chief minister. The turn of events later saw Sharad Pawar becoming the chief minister.

In this election, there was no contest whatsoever anywhere. I have written many times in this column on the decline of the Congress. I believe that the situation still can change if the Congress becomes active. All it needs is confidence. Quite strangely, the Congress got entangled in the atmosphere created by the chief minister Devendra Fadnavis, Shiv Sena chief Uddhav Thackeray and his son Aditya Thackeray. Alarmed over the Yatras taken out by these three leaders, the Congress itself lost confidence and conceded defeat even before the elections. Had Congress wanted, it could have exposed the shortcomings of the ruling party. Many issues were smoldering under the ground and many problems cried for attention which were ignored by the ruling party. There was latent resentment against the ruling dispensation. The Congress could have struck aggressively but this did not happen. On the contrary, Sharad Pawar showed great determination. He did not care for sunshine or rain. He did not care for either food or water. He went the whole hog like a warrior, wielding Shivaji’s sword. Entering the electoral arena with full strength and courage, he shook Satara’s throne and his party benefited too.

Before the election when Ashok Chavan was replaced with Balasaheb Thorat as Maharashtra Pradesh Congress Committee chief and five other people were appointed as the working presidents, it was clear that the party expected that they would manage the election better and the Congress will do better under them. But these people were contesting elections and did not get out of their constituencies. So the question is why were they given the post? The leader of the Opposition Vijay Wadettiwar, Ashok Chavan, Prithviraj Chavan, Sushilkumar Shinde and other senior leaders like them remained confined to their own constituencies. Those who were appointed as the star campaigners campaigned only for star candidates.

You will be surprised to know that in about 20 to 25 segments, the Congress candidates lost by only 2,000 to 4,000 votes. Had the star campaigners and senior leaders gone there, these candidates could have easily won. Yes, Rahul Gandhi held a few rallies, but had more senior leaders of Congress joined in, a positive atmosphere could have been created. I can understand that Soniaji could not come due to health reasons. Had Priyanka Gandhi held even roadshows in these areas, the Congress would have comfortably increased its tally by 20 to 25 seats. Two national general secretaries of Congress, Mukul Wasnik and Avinash Pande, are from Nagpur but they too could not bring senior leaders to Maharashtra for campaigning. Even Ghulam Nabi Azad, who has represented Vidarbha region of Maharashtra many times, did not come to campaign. His visit definitely would have made a difference.

On the contrary, the entire leadership of the BJP was fully engaged in the election. Along with Prime Minister Narendra Modi, BJP president Amit Shah, chief minister Devendra Fadnavis, Union minister Nitin Gadkari and many other leaders were engaged in campaigning. When leadership shows enthusiasm, it is natural that activists also get enthusiastic. The BJP workers were excited but the Congress workers lacked enthusiasm! There is no harm in saying that the MLAs who won, did so on their own strength. This is their personal charisma. The Congress party just sent a small amount to contest elections.

In reality, it did nothing more than this. I do not know why the Congress has forgotten that the party workers are there still in every village, in the cities, on the streets, in the bureaucracy, but unfortunately there was no one to give them guidance, encouragement, direction and respect. I feel that had the Congress showed the same enthusiasm and determination like Sharad Pawar displayed and ensured better coordination with the NCP, both the parties would have won more seats than what they actually got. At many places, the right candidates were not given tickets. Surprisingly, the Congress did not put up its candidate against BJP state president Chandrakantdada Patil. In order to defeat him, the Congress should have put a lot of effort but this was the first time that the Congress supported the MNS candidate.

As far as the BJP is concerned, Fadnavisji knows how the lay of the land is. The condition of the farmers is bad and it is not easy to fulfil the aspirations of the youth. Despite this, he succeeded in building his image as a clean and action-oriented leader. This time the BJP had given the slogan ‘Beyond 220 this time’. In the initial phase, it seemed to me that the BJP could win 120 seats and Shiv Sena 80 seats. But while touring, I started to understand the reality. I told Fadnavisji that the BJP would not get more than 110 seats in any case. Shiv Sena will be somewhere between 60 and 65. The denial of ticket to Chandrashekhar Bawankule also resulted in the reduced tally for the BJP. One particular section was angry with the BJP.

And as far as Haryana is concerned, if the strong leader of the Congress Bhupendra Singh Hooda had already been given the election command and Kumari Selja brought in at the right time, the Congress would surely have succeeded in forming the government there. As usual, the Congress took too long this time to take a decision. This is the reason why Congress did not come to power despite getting the affection of voters in Haryana.

It is a bitter truth that in the elections to the Maharashtra Legislative Assembly, the Congress was not visible in the electoral battle. Neither was there any sense of struggle nor any desire for victory! The Congress candidates scored victory, thanks to their personal charisma and not due to the efforts of the party at all! Had the Congress shown the same passion as Sharad Pawar, the story would have been different! 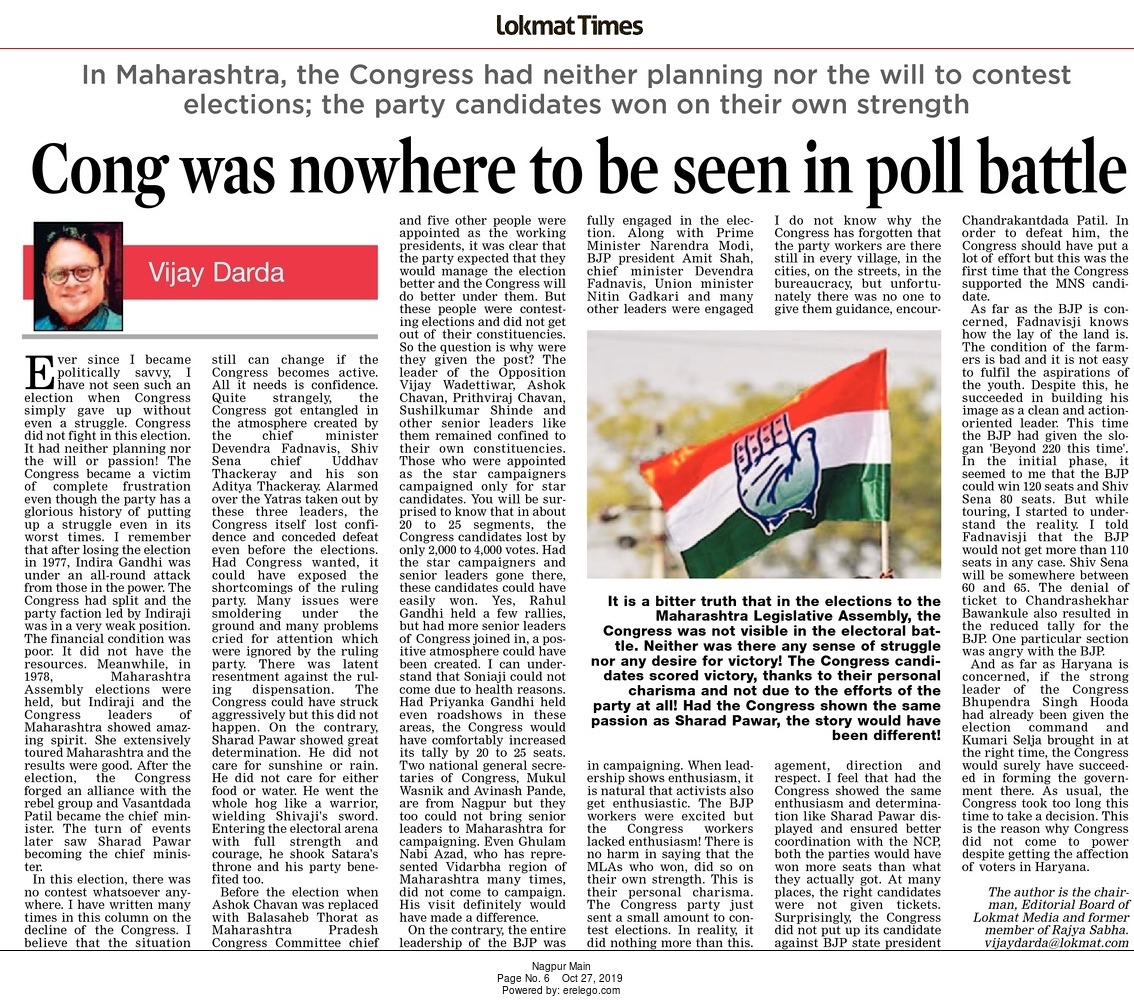