Right now there are two important elections being held in the world. Firstly, the US is going to elect its president who will ‘rule’ the world, and secondly, an election is going to be held in Bihar which will play a crucial role in the politics of our country. In the US, the slogan like ‘we are making vaccines, vote for us, we will give free vaccines, give us votes’ is rending the air, while a similar slogan is the toast of the electoral season in Bihar where the parties are promising free vaccines to the electorate in exchange for votes. Before the election in the US, a huge financial package was disbursed among the voters. Now the similar exercise will be undertaken in Bihar.

The voters in the US are being confused the way the voters in our country are misled in the name of caste, religion, language or regionalism or by doling out unrealistic promises. The propaganda leaflets in Gujarati, Hindi, Marathi, Tamil and Telugu languages have been distributed in the US to attract Indian immigrants with ethnic background. Even in the ballot paper, we have seen the use of Gujarati language for the first time. Just as the slogan of ‘nationalism’ has acquired cogency in India, the slogan of ‘our man’ has attained a great popularity in the US.

Donald Trump has said that he will not tolerate the intervention of other countries in the US elections. His rival candidate Joe Biden has also warned that if others try to penetrate the US internal system, they will have to face the dire consequences. We, too, are mentioning China and Pakistan, saying that only we can teach them a lesson.

I am comparing Bihar and the US because the latter has become a land of wisdom due to the knowledgeable people who have immigrated there from all over the world. Bihar is a land of wisdom too, but the difference is that Bihar has not been able to use it. Some people have made ‘Bihari Babu’ a term of mockery but it is not! The skill, sharpness and intelligence that the people of Bihar have is the result of the land where Lord Mahavir, Lord Buddha and Chanakya took birth.

Today, even though there are many best universities around the world, it was Bihar that gave to the world its first university in the form of Nalanda. And yes, how can we forget that the Lichchavi kings of Bihar also gave the world the gift of democracy. In fact, Bihar has the ability to lead the country but our politics has failed in giving direction to such sharp-minded people. Those who are conscious of Bihar’s glorious past are deeply perturbed to see its present plight. Much time has passed but nothing in Bihar has improved. No party or leader has been able to take Bihar in the right direction.

Just as the electoral tactics have been adopted by the mainstream political parties in the US to lure voters, similar is the case in Bihar. Be it Nitish Kumar of JD(U), BJP leader Narendra Modi, RJD’s Tejashwi Yadav, all are making full use of electoral tactics. How can anyone be blamed in such a situation? As for Congress, it is trying to compete with whatever resources it is left with. Whatever the result!

Prime Minister Narendra Modi is also busy in the election campaign, but I believe that if people have faith in him, they will surely vote for his party. If the promise to the allies is not fulfilled after gaining power, the credibility of the Prime Minister may get hurt. I think that at least one man should be such that people should have full faith in him!

The situation which once prevailed in the US also prevailed in Indian democracy, but what is the use of remembering the old things now? It is because all those things have changed. Now, whoever comes to power, irrespective of party affiliation, indulges in self-aggrandisement in the name of public good. Therefore, whether it is Bihar or any other state, the situation everywhere is pathetic. That’s why crores of people go to sleep hungry or crores of young men run from pillar to post in search of a job.

Unfortunately, there is no discussion about the basic questions of the common man in the Bihar elections. Today, the workers who have reached Bihar by walking hundreds of kilometres from Mumbai and Delhi during the pandemic-induced lockdown are facing a huge problem of livelihood, but no party is discussing how employment opportunities could be provided to them. There is no promise to improve healthcare services. No party has a roadmap as to how it will rid Bihar of the stigma of still being the most backward state.

There is no discussion on the crime situation either. Every party has distributed tickets to some candidates with criminal background and it is certain that many such candidates with tainted character will enter the temple of democracy after elections!

Elections will come and go but democracy should remain strong. Democracy can remain strong only if people remain happy and prosperous in all respects, but Bihar is overtaken by an acute sense of helplessness. The basic questions of the common man have been lost in the electoral cacophony. There is an atmosphere of doom and gloom around. Who will remove this darkness?

Irrespective of where the elections are held, the reality is that the basic issues facing the common people are always given the go-by. The Opposition may raise some questions but the party running the government does not want to face the basic questions. It just tries to woo the voters by hook or crook so that somehow they get votes to retain power! 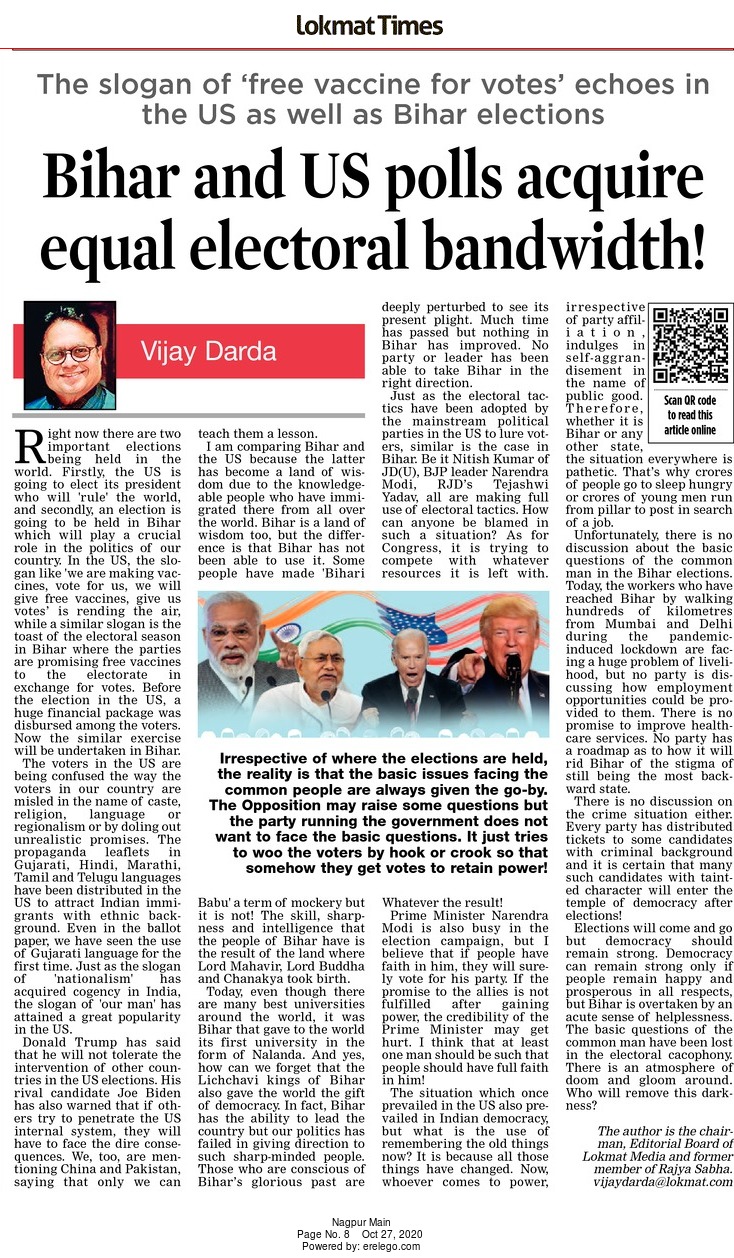