There is an old adage that power has thousands of hands, normally not visible to the people. Miracles of power are not even seen! The results of Bihar Assembly elections seem to prove this saying right. After all, what was it that returned Nitish Kumar to power again? In reality, there was nothing which could have catapulted Nitish back to power. The agony of the migrant workers who reached their villages on foot from Delhi, Mumbai, Gujarat and Rajasthan should have haunted Nitish in the elections. The issue of unemployment should have taken the centrestage but why was it relegated to the background? Nitish Kumar becoming chief minister for the seventh time looks like a ‘miracle’!

It is a common knowledge that being in government has its own incomparable advantages and when the power of Delhi is also with it, the ‘icing on the cake’ saying becomes a reality. Everything falls in place. Nitish Kumar was made the face for the chief minister’s post by the NDA, so obviously dozens of Union ministers including Prime Minister Narendra Modi descended on the electoral arena with all their strength and there was no shortage of resources. Despite this, it seemed that indignation towards Nitish would outweigh these resources, but the ‘power’ with its thousand hands overpowered everything along the way, and in the end, it proved to be the victory of power. The questions therefore, become meaningless as to why the industries are not coming up in Bihar? Why do people have to go to the far-off places of the country in search of work? Why are more than 5.5 lakh posts lying vacant in government departments? Why were efforts made to hide the figures during Covid-19? Why is the government hiding the number of deaths caused by Covid-19? People of Bihar are very intelligent and hardworking, yet why is there no opportunity available for them in Bihar?

RJD’s Tejashwi Yadav raised these questions with full force. He also promised to create 10 lakh jobs for the youths of Bihar. He also tried his best to expose the government warts and all, but he was struggling with the lack of resources. His father Lalu Prasad Yadav was not there to support him. On the other hand, Asaduddin Owaisi had jumped into the fray to eat into their votes. Owaisi has finally won five seats too. It is obvious that Owaisi’s party has cut into the votes of the grand alliance. Chirag Paswan has not only damaged the JD(U) of Nitish, but also divided the Dalit votes that vote for RJD. Chirag Paswan and Owaisi were harming the opposition by becoming the BJP’s ‘B team’. Despite this, the kind of courage shown by Tejashwi Yadav and the kind of competition he gave to the NDA is praiseworthy, to say the least. The RJD has emerged as the largest party under his leadership. Had Owaisi not been in the fray and had Congress won as many seats as it did in the previous election, Tejashwi Yadav would have occupied the post of chief minister of Bihar. Giving more seats to Congress proved fatal for him. Despite all this, there is no hesitation in saying that Tejashwi has emerged as a new hope of Bihar. He has shown the leadership ability.

As far as the victory of the NDA is concerned, the former chief minister of Maharashtra and incharge of Bihar elections Devendra Fadnavis has contributed a lot. He knew that the popularity graph of Nitish Kumar has dropped, so the BJP should contest more seats. He ignored the stubborn attitude of Nitish and as a result of this, the BJP has gained 21 seats more compared to the last election. The party has thus brought down the stature of JD(U) with its strategy, skill and support. Now Nitish Kumar is not in a position to browbeat the BJP. BJP is now in the role of elder brother. Actually, by the time Nitish Kumar could understand the BJP’s strategy, it was too late. The BJP has captured Nitish’s turf now. In the next elections, Nitish should not lose whatever turf he is left with. But this will come later. Nitish has also said that this was his last election.

The BJP’s strategy is to swallow the allies wherever possible and whenever possible. In Maharashtra, it tried to do the same with the Shiv Sena, but the latter understood the game and left the BJP. Nitish has landed himself in such a position that he can neither leave the BJP nor go anywhere else! But in the midst of all these political situations, Bihar has sustained the biggest loss. Regardless of the claims made by the NDA and Nitish Kumar, the reality is that nothing has changed in Bihar under their rule. It continues to carry the stigma of being one of the most backward states. It seems that the power has won but the common man of Bihar has lost.

As Donald Trump failed to effectively tackle the coronavirus pandemic, the American people threw him out of power. Even in Bihar, it was projected that people would not vote Nitish back to power, but all the presumptions proved wrong! For, power after all is power; it has thousands of invisible hands! 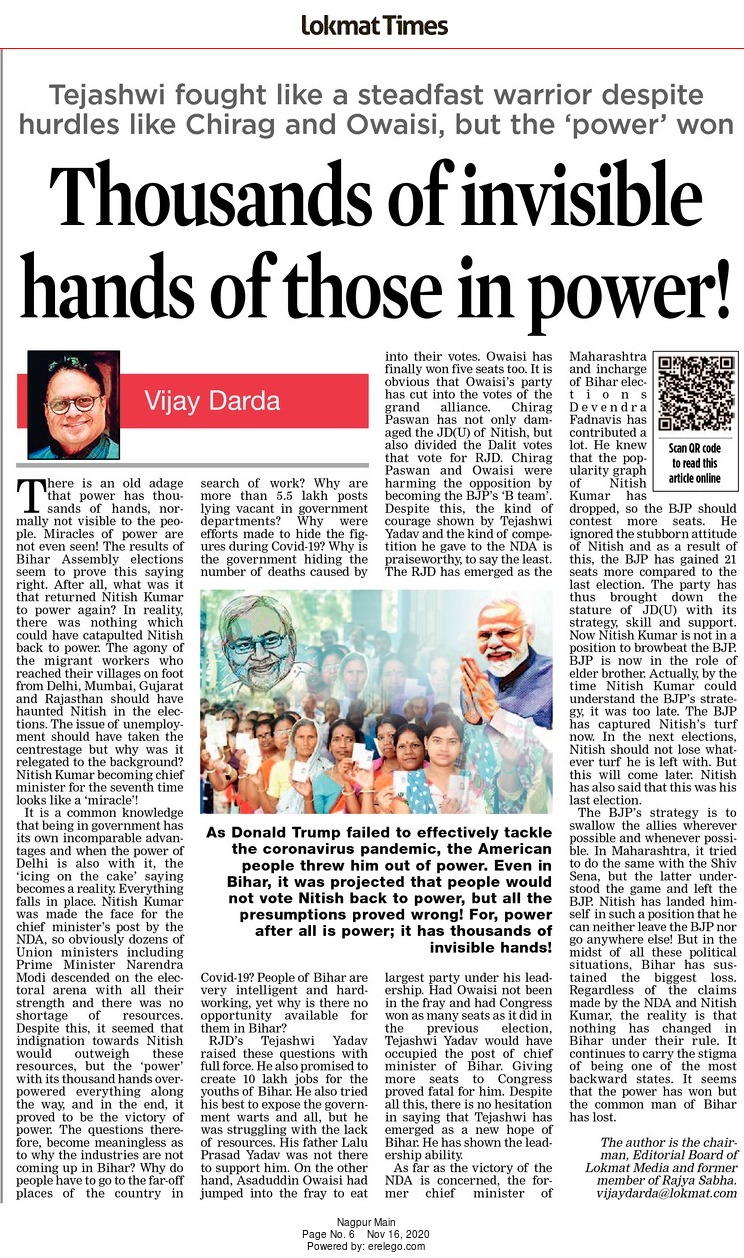 Foundation of unity of Opposition shaken