We are witnessing a sharply divided political debate on the issue of black money. Both the sides are putting forth their viewpoint vigorously. There are some debates about the quantum of the black money stashed abroad. Some experts are also talking in legalese. But for me as a parliamentarian and a public representative the core of the issue goes beyond all these finer points. It is essentially about keeping the faith in our democratic system. It is all about keeping the promises that we make to the people while seeking their votes. There is a much deeper sanctity to these promises, and we politicians inflict incalculable damage to this sacred bond between the electors and the elected when we take such things lightly.

Let us not forget that for years the Bharatiya Janata Party has formulated a very simple equation. Corruption equals black money. Congress is corrupt, and so all the black money stashed abroad either belongs to Congress leaders or their associates. The co-relation between the Congress ‘hand’ and black money has been sought to be exploited by the saffron parivar. This formula was not invented by the current prime minister Narendra Modi during the campaign for the last Lok Sabha elections. We all know that public memory is short, so let us recall that this proposition first came from his now dumped mentor Lal Krishna Advani just before the 2009 elections.

Then for years the saffron surrogates including the Yoga guru Ramdev have been drumming this theme. He puts this amount to be more than 4 lakh crores. Also to lend some legal seriousness, their own lawyer the 92-year old Ram Jethamalani has made this his mission and is the petitioner in the case that is now in the Supreme Court. All this got a sharper edge when Modi as the macho campaigner ran down the Congress as corrupt and promised that within 100 days of his forming the government, he would get all the black money back. Then not only would the country have enough resources to meet its developmental needs but and each one of us will have lakhs of rupees deposited in our bank accounts. After all, the premise of this campaign is that the Congress leaders have looted so much wealth, that getting it back is merely a question of political will, that Modiji has in abundance, all our economic woes shall vanish in thin air. This has been the saffron gospel on black money.

It would also be in order to recall that during this entire period the BJP and all its leaders have consistently mocked at the Congress position on his issue. The Congress admitted that getting back the black money is indeed a serious issue, but also underscored the fact that it is easier said than done, and there are legal processes, international agreements as well as domestic laws that have to be followed in each and every case. All this takes time, although the process has been initiated. But this arguments did not get any attention in the public domain.

Now more than 150 days after the government has been in power, we have heard the same argument from the learned Attorney general Mukul Rohatgi on the issue in the Supreme Court. This indeed is hardly surprising for those who have been aware all the time that the BJP has been simply playing politics on this issue. But the shocker has come from the union finance minister Arun Jaitley. Instead of actually going ahead and naming the ex-UPA union minister who according to him does figure in the list of black money accountholders, he is simply content with grabbing ephemeral headlines in a 24 hour news cycle. For that matter, he should be quick to complete the formalities with regard to all the 800 names that he has told us are there with him and any delay on this count is the real betrayal of the people’s faith. The delay has made him suspect in the eyes of his one-time party colleague Ram Jethamalani, and it would not be before long that this impression settles down in the people’s mind as well, if the same state of affairs continues.

To be sure no Indian in his right mind ever believes that any government would be generous enough to deposit lakhs of rupees in his individual bank account, just like that. He or she knows that these are political games. But corruption qua black money is a matter of serious concern, and everyone expects that the government will act as promised. For the Modi government, there is no other option, but to make good this promise.

For the lay people black money conjures up the images of wads of currency notes stashed in false ceilings or stuffed in gunny bags as well as mattresses. This is true but the reality is that most of the black money circulates in the economy. Indeed, the colour of the money changes from moment to moment, and from one transaction to the other. You may earn in white and spend it in black or vice versa. For instance, in every urban real estate deal at least 30 to 40 percent of the transaction amount is in black-that is unaccounted. Then the biggest business of it all-the elections are fought with black money. It is generally assumed that all black money creators are on the wrong side of the law. But can we ignore that there are white-collared professionals like the medical practitioners who contribute to the black money economy as well? How much of their income is accounted for is anybody’s guess? All of us know that the expenses limit set by the Election Commission is the biggest piece of self-deception practiced by our law makers. There is no limit to the ingenuity of the people who want to dodge taxes, and this is indeed the root of all black money.

So, when the government talks of curbing black money it has look beyond the sensational stuff from the Swiss banks, and has to work on systemic changes that make it less attractive for people to dodge taxes and create unaccounted incomes. Indeed, getting more tax payers into the net painlessly and thus increasing tax revenues is the preferred route to curbing black money rather than mere glib talking on television. 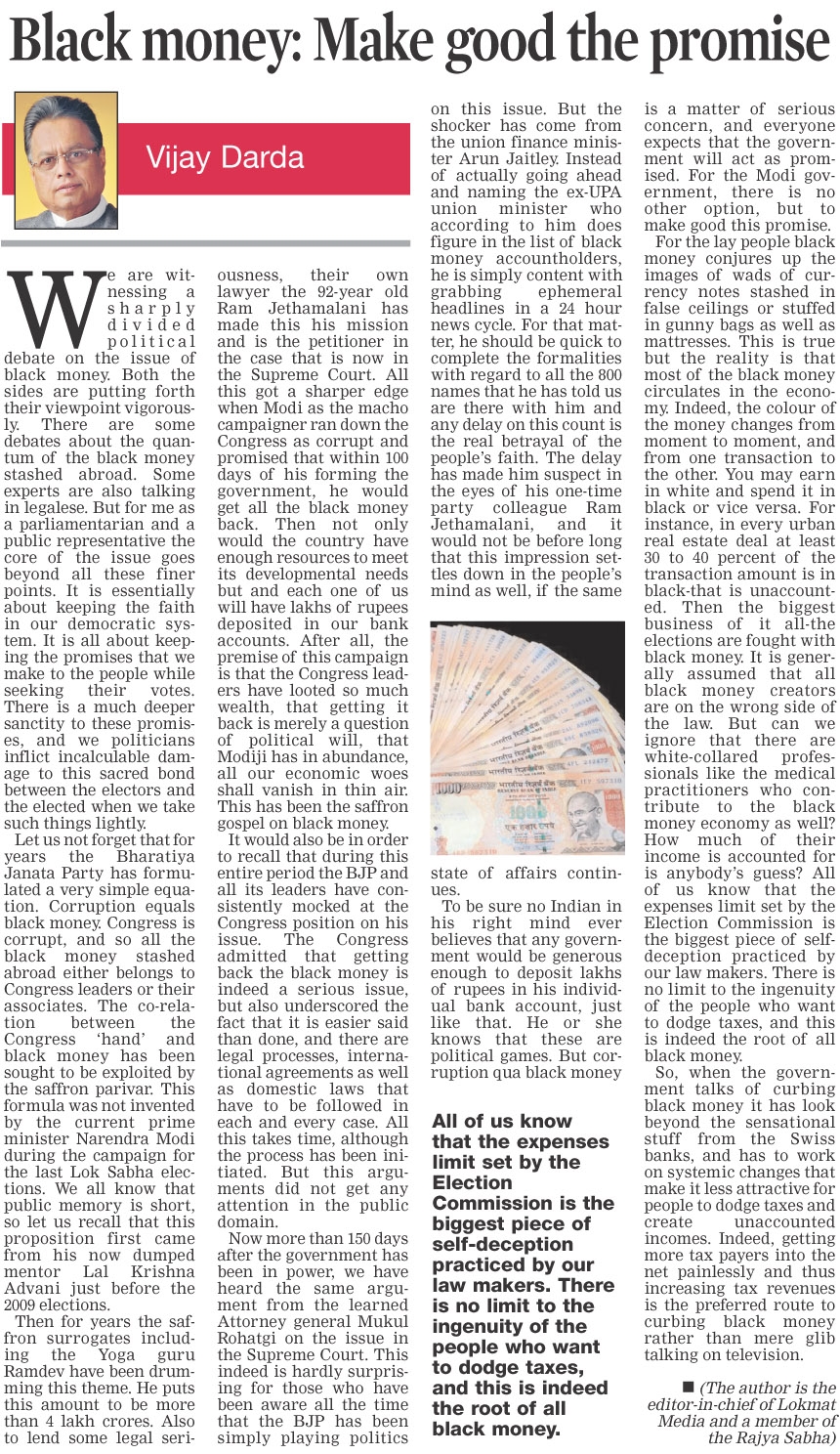