Everyone had great expectations from the Budget; promises are many but the hope of immediate relief belied

We all know that the stock market is normally closed on Saturday, but this time it was open as the Union Budget was to be presented on that day. After the presentation of the Budget, the Sensex plunged 988 points and the Nifty dived 300 points. The shares of many companies nosedived. This kind of reaction from the sensitive index is indicative of what the stock market thought of the Budget! Business world understands the nuances of Budget better because these are the people who possess foresight and keep a hawk’s eye on future and also generate employment. They also make a big contribution to the economy.

I would not like to call the Budget negative, for every initiative contains positive thinking but it seems that the immediate relief that was needed is not visible in it. Particularly, spontaneity to overcome economic crisis is not evident. The finance minister’s speech was rather long. And she has also given a long list of plans. We hope that the schemes are successful and that the goals that the government has set are met and achhe din should really come. But the million dollar question at the moment is how will the government deal with the economic challenges that the country is facing? Where will the money come from in the market? There was a hope that the government would give some tax exemption to the taxpayers so that they could have more money to spend on their needs. Everyone expected this because it is a way through which money can reach the market directly.

When consumers will have money in their pockets, only then will they spend and the money will reach the market. They will buy houses, buy vehicles and this will improve the condition of industry and business. But this did not happen. In case of tax slabs, the government showed amazing acrobatics. It raised a new slab but also said that if you pay taxes from this slab, you will have to leave the old concessions. In the old slab, there were about 70 concessions like buying houses, expenses on children’s education, insurance expenses, etc.

Now if a person wants to come to the new slab, forgoing these concessions, he is not going to get any benefit. In the ideal situation, if a person was given an exemption of Rs 30,000 in the old slab, an exemption of only Rs 25,000 will be given in the new one. It is obvious that only those people who have not invested or are not in a position to do so or do not want to invest will come in the new slab. Hitherto, the middle class was empty-pocketed and if the pocket is still empty, the question is, where will it invest money in the market? That is, there is no reform in this matter.

There are multiple provisions for farmers in the Budget. Despite provisions, no money is reaching the farmers’ pockets directly. If there is no money, where will he buy modern agricultural machinery and how will it increase production? Farmers’ income cannot be doubled by simply increasing the support price. For this, increasing production is more important. The announcements that have been made can be fruitful in the long term, but what about the current economic crisis? To overcome the economic crisis, there should be a direct relationship between the consumer and the market. This relationship arises from money. When the consumer has money in his pocket, he will buy a house, TV, fridge, vehicle and other goods.

If there is money, he will go out on tour and will also spend on entertainment. If there is a demand for goods in the market, the industry will manufacture it and the businessman will deliver it to the consumers. There is no money in the market right now, so there is no demand. The entire chain has collapsed. There is no area unaffected by the economic downturn. The government does not consider economic recession. It uses the word sluggishness, so I am also saying sluggishness! Our construction industry and automobile industry are on the verge of collapse. All this has cut crores of jobs and added to joblessness. Unemployment has taken a horrific dimension.

Of course, the scrapping of dividend distribution tax (DDT) is a good step. This will benefit mutual fund investors and foreign investors, in addition to small investors investing in the companys’ shares. But on the other hand, the rate of income tax on the promoters of the company has been increased from 34 to 43 per cent. This will increase the tax burden on the industrialists who create the wealth. There will be no investment and unemployment will rise. Not only this, 0.01 per cent transaction tax has been imposed on the sales of companies having turnover of more than Rs 10 crore.

Big companies like Hindustan Unilever will lose because the tax has to be collected on annual sales of more than Rs 50 lakh. Its burden will be on the distributors, stockists, dealers and the taxpayer will also suffer. The definition of NRIs has been changed in the Budget. Now, any person staying abroad for more than 240 days instead of 180 days will be called Non-Resident Indian (NRI). Their income abroad will also be taxed. They will have to pay tax at the prevailing rates in India. This will affect the investment of NRIs in India. There is no harm in saying that the hope of encouraging investment from the Budget has been belied.

No revolutionary announcement has been made for the domestic industry that could show any possibility of ending the economic slowdown. How will economic development happen then? Our economic growth rate has steadily decreased to 5 per cent and finance minister has set a target of 10 per cent for 2020-21. The question is, will the 10 per cent target be achieved by selling equity of LIC, Air India and other companies? However, the economists of the country don’t buy this theory. How can the common man believe it then?

I am not an economist nor do I have any doubt about the intentions of the government. The government has wise people. It must be planning well, but that should transform into credible output. I look at the Budget from the perspective of the common man, who is troubled by the sluggishness of the market. Downturn is everywhere in the industry as well as in business. 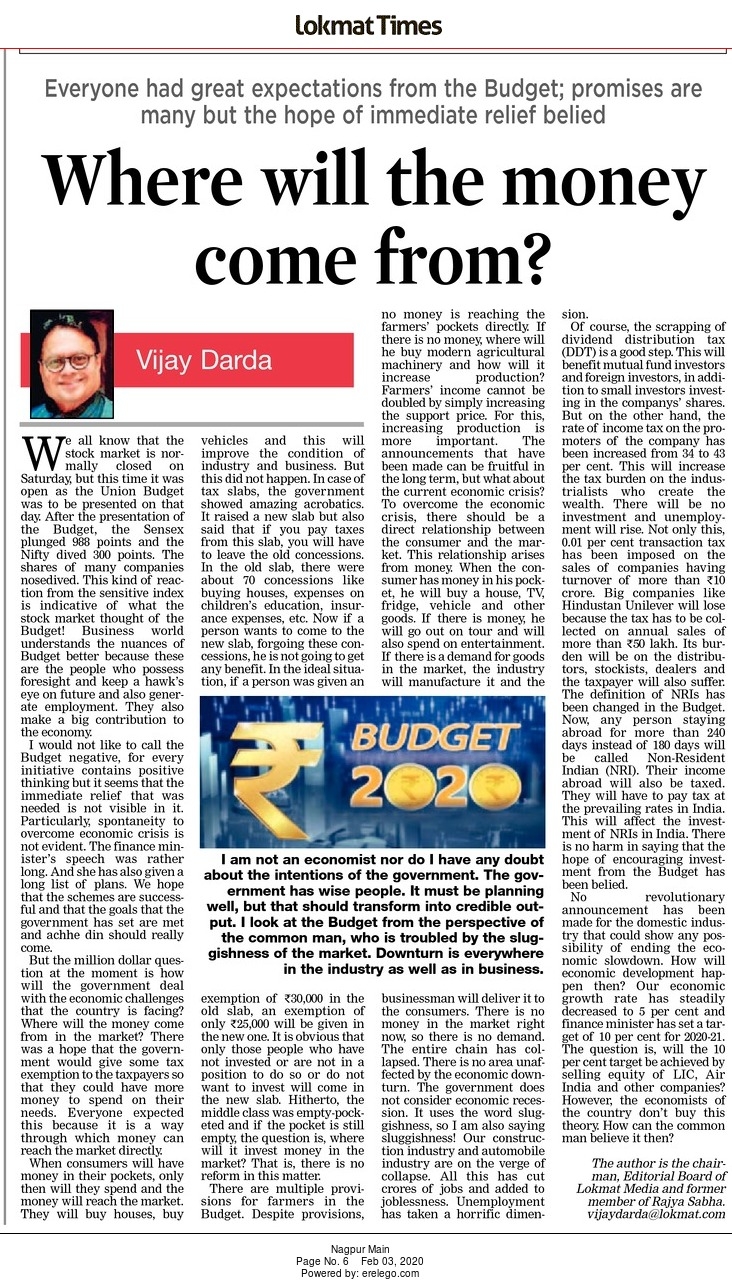 ‘One nation, one election’ a good initiative for sure