Can they really trace the killer of lakhs of people?

Appearances are always deceptive. There is always more to it than what meets the eye. A lot of stories are hidden behind it and a lot of conspiracies exist. It is quite evident that the invisible war between the superpowers is adversely affecting millions of innocent people all over the world. People are paying the price of this war with their lives for no fault of theirs. This is the most critical question. Today, there is catastrophe in the whole world. Countless people have become homeless. Lakhs of people have lost their lives and means of livelihood. Countless people have become paupers but these global powers don’t care! Their craze for power and one-upmanship continues. In this situation, will anyone be able to trace these invisible terrorists and punish them?

In these times of pandemic, such disconcerting questions are testing the patience of sensible people and making them crazy. The so-called superpowers have unleashed the orgy of death and destruction across the world on various pretexts; sometimes in the name of distribution of grains, sometimes medicines and weapons, biological warfare and sometimes in the name of nuclear war. They have trillions of dollars, rich intellectual resources, sophisticated knowhow, and an army of leading scientists enabling them to establish their stranglehold all over the world right from the land, air, water to the sky. Where does the common man stand in this grand scheme of things? They are there to perish. Millions of people lose their lives every year in every continent of the world because of the misdeeds of these so-called superpowers. They do not care if people are dying or becoming homeless! They are only worried about their own interests. They can go to any extent to gratify their own lust. They just want to get the world to dance to their tune!

Though they claim to make the world a better place to live in, the reality is far from it. They are clever and tricksters too! They rule people’s minds in a very cunning way. They scuttle others’ influence to expand their own. Examples are galore. America had supplied us red wheat when there was food grain shortage in the country at one point in time. The then Prime Minister Indira Gandhi was so upset that she had even said that the red wheat so supplied is not fit for consumption for animals! And if your men eat it, do feed them, she had said. It is said that the US not only supplied red wheat but also sent carrot grass seeds with it. The same carrot grass has become a headache for us today as it grows where normally the crops should.

This is not true in case of America alone. Japan and Russia were once superpowers and now China has joined their rank. Every superpower in the world plays similar games. These superpowers develop new varieties of seeds and sell them by putting pressure on the government of not only the developing but also the developed countries. Farmers are convinced that they will have a bumper crop. After two to three years, the farmer realises that the land has become barren. This way, these superpowers ruin the economy of those countries. There is no end to their lust for power! In Africa, they captured the waterways because they had to keep warships afloat there. They captured the sky through the satellites. They never lag behind in grabbing a piece of earth.

Not only this, these superpowers also decide who will be the Prime Minister or President in which country. Countries like Turkey, Syria and Iraq are examples of this kind of power game. But even the world’s superpower in the unipolar world did not escape it. You must be aware of the controversy related to the Russian interference in the US President’s election! These superpowers also threaten other countries to get their needs fulfilled. Just a few days back, when India banned the export of hydroxychloroquine medicine, Trump, who calls Modi ji his friend, doled out a threat the very next day. India had to bow before the US might.

Actually these powers have tremendous influence. From money to business, they want to have their say. They breed hatred and enmity among the neighbouring countries so that the relations among them remain strained always. They make one country fight against another by sometimes supplying arms and sometimes money! The US had tried to weaken India by providing weapons and money to Pakistan and now China has started playing the similar game through Sri Lanka and Nepal. It is no secret that China sends a huge cache of illegal arms and weapons to the outlawed groups in India! These powers conspire to destroy the countries which try to assert themselves. Iran is a burning example. How strange it is that the US kills Islamic State terrorists in Iraq but helps the same group in Syria. All this happens because if peace prevails, who will purchase weapons from these powers? There have also been allegations that these superpowers take billions of dollars from the pharmaceutical companies and therefore, medicines are produced first and the diseases come later.

In this situation, how can one expect that the reasons behind the spread of Covid-19 will be investigated properly! The World Health Organisation, the investigating body, is under suspicion at the moment and it is facing the allegations of favouring China. In such a situation, the world should not expect too much that anyone will try to honestly investigate, catch and punish the killers of millions of innocent people!

The World Health Assembly of the WHO finally decided to probe the reasons for the spread of Covid-19 among humans. But the critical question is, will the world body be able to find the killer of lakhs of innocent people? Will it be able to find out what it is and where does it exist? 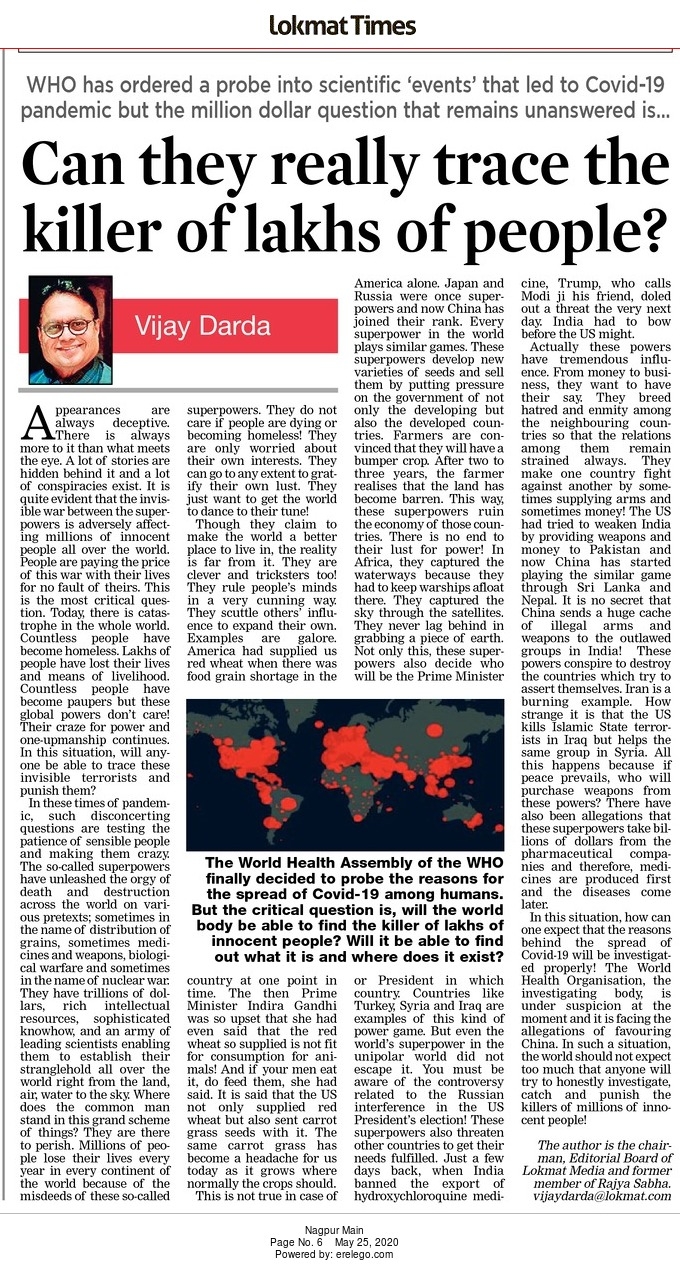