Changing names in tune with the local dialect is comprehensible, but some changes are raising questions

Jabalpur was probably the first among the cities which needed to be renamed soon after India gained independence. The British used to pronounce the name of the city as Jubbulpore according to the colonial pronunciation system. Of course, this was hard for an Indian to pronounce. Therefore, Jubbulpore’s name was simplified and changed to Jabalpur. Similarly, the names of many cities in South India were changed because there was considerable difference in pronunciation of the established names and their pronunciation by the British. There were also strong arguments behind changing the names of the cities that underwent a name change.

The Central government passed the State Reorganisation Act in 1956 to help outline the states anew. Under the same Act, the name of the State of Travancore was changed to Kerala. Following this, there was a demand that the name of Madras State should also be changed. It used to be called Madras Presidency in the British era. Madras State was changed to Tamil Nadu in 1969. And in 1973, Mysore State became Karnataka. In fact, these changes were to end the British colonial system. Even after that, the feeling of locality has been the biggest reason for the change. For example, Pondicherry’s original name is Puducherry or Orissa’s name is Odisha. This was the reason behind the changing of name of Madras to Chennai, Bombay to Mumbai or Calcutta to Kolkata. In the local dialects, these cities were referred to by these names only. Therefore, no one expressed any doubt about these changes in names.

But now the way cities’ names are being changed or demands are being raised for renaming, there is clearly a sense of sectarianism behind them. Allahabad was changed to Prayagraj and Faizabad district was named Ayodhya! Allahabad was known as Prayagraj till 435 years ago. In 1583, Mughal Emperor Akbar named it Allahabad. It means ‘City of God’. It is evident that the idea behind changing the name of Allahabad is inspired by ‘neo- nationalism’. Even when the Mughalsarai Station was renamed as Pandit Deendayal Upadhyaya Station last year, the question was raised about this kind of thinking. However, many names are in queue. From Aurangabad, Ahmedabad to Hyderabad, the names are in line for change.

If the government itself is interested in renaming, the name is bound to change too! But will there be any difference in the physical condition of the cities by merely changing names? At present, all the cities across the country are being swamped with the migrants from the backwaters. There is no work for the people in the villages. There is a complete lack of industries and businesses. Therefore, migrating to the cities is the last resort for the rural youth. With crowds swelling, the infrastructure of the cities is feeling the strain and they are creaking under the pressure of the swamps of migrants. A large number of slums and illegal settlements have sprung up.

A report released this year by the World Health Organisation dwells on the condition of Indian cities and describes it as very bad. This report says that 14 out of 20 most polluted cities in the world are in India! We have been seeing the condition of our country’s capital, Delhi, where people are putting on a mask these days. There is no such city in the country which can be said as fully equipped. Just a look at state capitals is sufficient to give us an idea of our condition. It is good that the Central government has started a massive campaign to make cities smart, but it is more on paper, less on the ground! Our cities are cursed with bad roads, and poor drainage and sanitation systems. The biggest reason for this is red-tapism in local bodies which do not get enough money from the Central and the State governments. Whatever money is received for development is barely sufficient and often accompanied by allegations of corruption. The traffic situation is abysmal.

Therefore, the need of the hour is to chalk out a plan for cities whose deadline is fixed and ensure that every project is well laid-out. This plan should be made in keeping with the long-term pressures so that our cities can cope with the swelling crowds for decades. By changing the names only emotions can be pandered to. If the city’s condition is changed, every citizen will be satisfied.

One more thing that I would like to say is that the government is not only changing the names of the cities but the names of the roads are being changed too. When the name of Mumbai’s Victoria Terminus was changed by the government, people had hoped that its condition would change too as Chhatrapati Shivaji Maharaj was considered to be an ideal management guru. But it did not happen and every year several people have been losing their lives due to sordid condition at the station. The reality is that changing the names does not change the condition of the road. The need of the hour is to turn every road into the path of prosperity. China has developed a unique variety of purifier to purify the air of its cities. It is imperative we did something like that. Playing with emotions by changing the name will only make things worse. I am saying this for all, and not one, political parties which continue to play with the emotions for the sake of vote bank politics.

Nowadays, there is a debate over changing names of the cities across the country. It gives rise to a question as to why is it needed and how it all started? Is it inspired by the same pure intention as in the old days? Actually, the need of the hour is to give facelift to the cities as changing names will yield nothing. 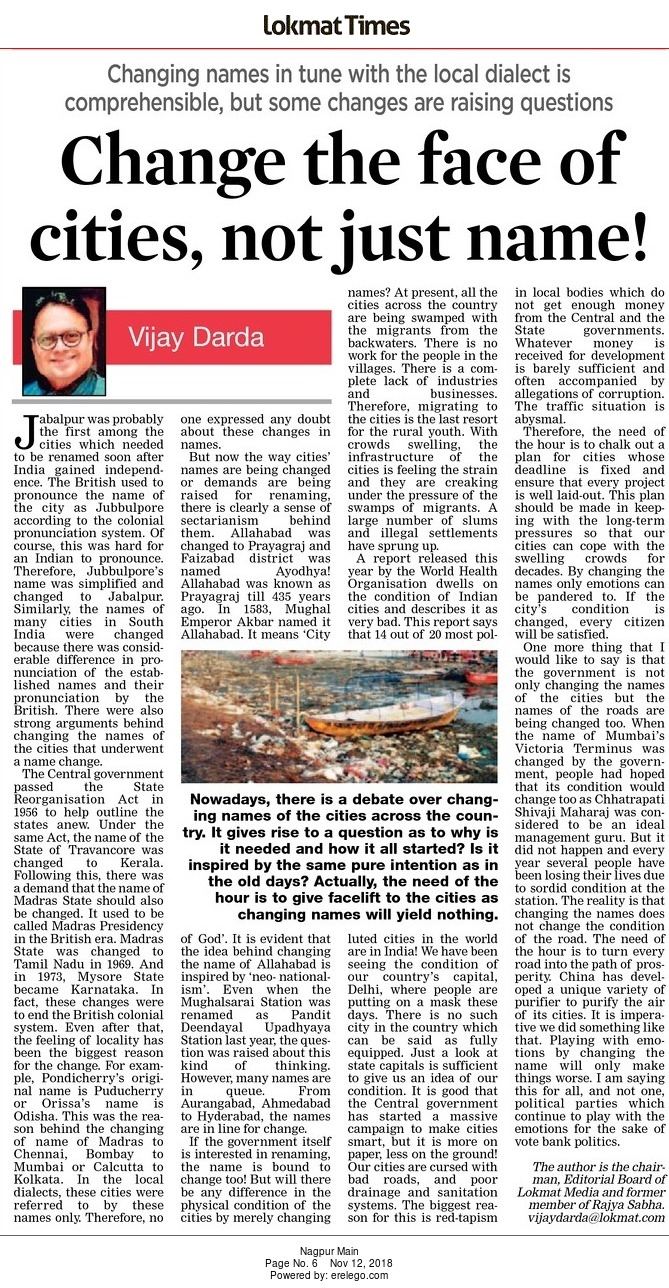 Who is responsible for the plight of cities?