Let us first get the size of the task clear at the outset. When the parliament passed the first constitutional amendment of the Modi government that seeks to replace the collegium system of appointing judges to the Supreme Court and high courts, it was not just an administrative or judicial reform. It was a shift in the power balance. Under our Constitution, the right of judicial review actually ensures that the courts have the last word on any issue. With the collegium system in place, the judges had the sole right to appoint judges, and thus the judicial power was absolute. This constitutional amendment retains the primacy of the judiciary in appointing judges, but the power is no more absolute. There are other voices too-the executive and the people as well.

The constitutional amendment is not yet the law of the land. The passage by the parliament is just the first step. It needs ratification by at least 15 states. It is expected that the process could take a year. But the legal challenge to the proposal has been mounted. Its contours shall get defined as the proceedings gather momentum.

However, it can be safely asserted that all of us would be well served if we can avoid an executive and legislature versus judiciary confrontation. This is a confrontation that we can well do without. As a mature democracy, we would do well to accept at the outset that a better judicial system is in the interest of all of us. So, if the collegium system goes, then it is also in the interest of the judiciary. We know that the Chief Justice of India Justice R M Lodha has defended this system. But it is also a fact that many former chief justices have criticised it. This also includes the late former chief justice J S Verma who was one of its authors. Even if we ignore the sensational revelations of former Supreme Court judge Justice Markandey Kajtu, there have been many other voices that have found fault with the collegium system. Now, the system of Judicial Appointments Commission that seeks to replace it has been debated and discussed in the public domain much before it was passed by the parliament. But if indeed, there are many angularities or rough edges in the proposed new Judicial Appointments Commission, then the best course is to work together and still avoid confrontation.

The contempt for the political class in certain sections of the society is well-known. But then an act of parliament is also a reflection of the people’s will. If the speeches in the parliament are any indication, and especially those coming from the members who have an inside experience of working with the judiciary, then there would be no doubt about the unanimity of the sentiment and logic against the collegium system. Just take a look at what the JAC would achieve in the next five years after it takes office. Actually it would be only four years, as we would be taking another year to make it functional. The JAC would be called upon to appoint 21 out of the 31 Supreme Court judges ( the incumbents beginning with Justice Lodha who retires this month, would have demitted office), and another 780 judges to the 24 high courts in different states. One indication of the lack of efficacy of the collegium system is the high percentage of vacancies — 34 percent at this stage in all high courts put together. All these aspects have to be taken together in the right perspective, as the three sides-executive, legislature and judiciary approach this issue in the coming months.

It is perhaps just a coincidence, that around the same time two other constitutional and legal skirmishes are building up. One pertains to the governors, and the second relates to the post of the leader of Opposition in the Lok Sabha. Indeed, in the light of the Supreme Court’s May 2010 directive that came after a petition regarding the removal of governors by the UPA-1 government, it would have been prudent for the NDA government to have relied on political diplomacy rather than flexing its muscle to nudge the Raj Bhavan occupants out. But now that governor Aziz Qureshi has come out in the open, this could be yet another stage for the executive versus judiciary contest.

On the face of it, the speaker does have the last word on the leader of Opposition status, and the Congress party has so far restrained from knocking the doors of the courts. Indeed, after the defeat, the more appropriate course would have been to avoid any debate on the subject altogether. But then the sagacity of the government is also on test as it should come out with an alternative mechanism in place for appointments that need formal consultation with the opposition. A lot rides on this mechanism considering that it is also needed for the JAC.

We are all accustomed to singing paeans to our democracy. Even the rest of the world admires our democratic success. But we must be pragmatic enough to admit that we could come this distance and avoid the pitfalls that have been inflicting our neighbour, only because our founding fathers had the exceptional collective ability to deliver such a robust constitution, and then the leaders of the initial years worked it with diligence. In retrospect, it looks a lot easier than it actually has been. Indeed, when we negotiate through present choppy waters, we may get an idea of the enormity of the task they achieved.

The current situation leaves us with no option but to build on the same edifice. Irrespective of the personal proclivities and ideological preferences that anyone may profess, the fact remains that a nation of 125 crore people cannot be suddenly expected to change course without any convulsions. The right kind of balance between the executive, the legislature and the judiciary is the key to any movement forward, and we as a nation would be tested severely in the days to come. It is on the outcome of this test, that this generation would be rated at the bar of history. 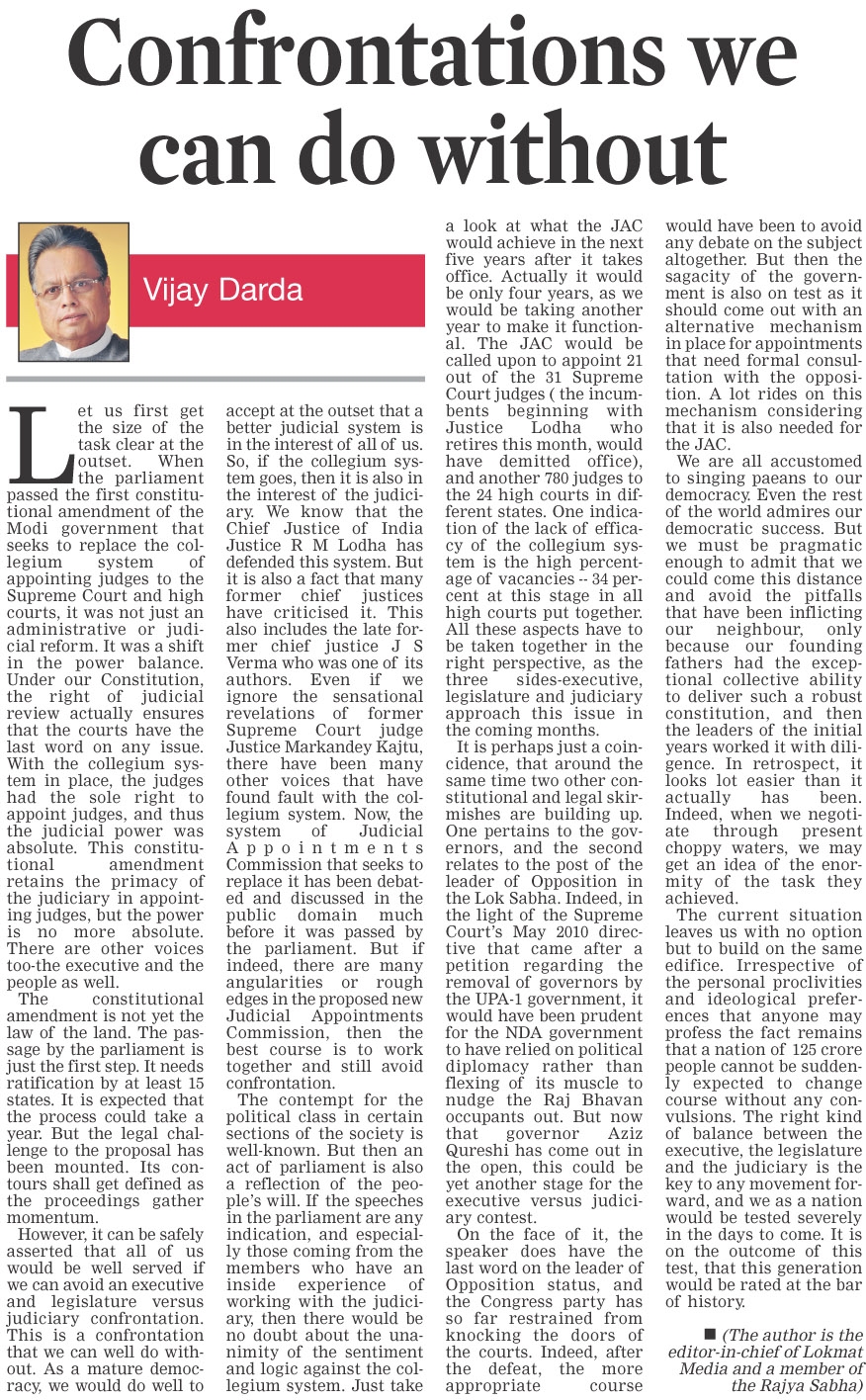