It has become fashionable to criticise the parliamentarians for merely politicking, and ignoring their more serious responsibilities of law making. But I am glad to report that in the just concluded Monsoon Session, a lot of path breaking legislative work was done. The Food Security Bill, the Land Acquisition Bill, and the Pension Bill of course hit the headlines with their political overtones, but there is yet another very significant piece of legislation – the Judicial Appointments Commission Bill – that got underway in this session. I am aware that there is still some time before it gets translated into a law, but if the debate in the Rajya Sabha on this Bill is any indication then it is just a matter of time before it sees the light of the day.

Now, what exactly is this Bill for setting up a Judicial Appointments Commission? Before, I get into this question, there is another significant issue that needs to be addressed — do we really need to fix our judiciary? Well, both these questions were very ably addressed by two of the finest legal minds in our country — the law minister Kapil Sibal and the leader of Opposition Arun Jaitley. Put simply, it was a treat to listen to both of them participate in this discussion. Their respective legal acumen is held in high esteem in the profession, but on that day both of them amply demonstrated that when it comes to the question of national interest, nothing, not even partisan politics that perennially divisive element, can separate them.

Let us get one thing right at the outset. Every one respects the independence of judiciary. Judicial decisions may apparently hurt one or other person, but then the faith in the judicial process remains unshaken. But then like everything human, even the judiciary has its own aberrations. Prima facie, the Judicial Appointments Commission Bill is a step towards correcting these aberrations. The two learned legal luminaries — Sibal and Jaitley — quite handsomely supported by the other sharp legal brains in the House — the always irrepressible and flamboyant Ram Jethmalani as well as the suave and soft spoken Parasaran took us through the changes that have taken place in the process of appointing judges since the early days of the post-independence era.

There is a marked division between the pre-1993 and the post-1993 periods. In the first one, the executive dominated the process of naming the judges, and in the second one it came down to only the judiciary. It became clear that although no one wants to go back to the pre-1993 era, there is an urgent need to fix the aberrations of the post-1993 era. Without naming names, Jaitley very eloquently described the role of the Chief Justice of India in becoming some sort of a ‘constituency judge’ on whose whims and fancies depends the entire process of appointments in the higher judiciary–both the Supreme Court and the high courts. He very rightly observed that this has an impact on the independence of the high courts as the judges have to ensure that they keep the Supreme Court in good humour or else their elevation to the apex court is either blocked or delayed.

The point to be stressed about this change is that the process of appointing judges is not a judicial function. It is an executive function. So, when the parliament is legislating about the process of appointing the judges it is not interfering with the functioning of the judiciary. Neither the judiciary’s right to review nor its functioning is being compromised in any way. Indeed, this change is about correcting the aberration that has willy-nilly stepped into the judiciary by completely shutting out the executive from this vital function.

Moreover, as the judiciary does not come under the Right to Information Act, it escapes from the same principle of transparency that it rightly wishes to impose on the executive. So, there is no way of knowing as to why a particular person was appointed a judge of the high court or the Supreme Court and for that matter why someone was denied elevation to the Supreme Court? One can be sure that the wiser minds in the judiciary would welcome this move towards transparency as more than anybody else they have demonstrated a continued commitment to the higher ideals of probity in public life.

The other aspect that was brought into sharp focus was the question of separation of powers that is the key to the delicate constitutional balance. It is alright for the judiciary to be an activist, and step in because the government has failed in its eyes. But then there would be anarchy if the reverse were to be practiced by the executive. Just because there are three crore pending cases in the courts, the government cannot decide the cases as the courts have failed to do that.

The harmony across the political divide in this case is not something that can be taken lightly. The BJP has been a votary of the change since 1998, and as was pointed out in the debate, Jaitley as law minister had moved a Bill in 2003. He described Sibal as a neo-convert to this cause. This to my mind is a sign of political maturity that has become a part of the parliamentary system. The ability to evolve and change positions is the key element in strengthening of the democratic process. Sibal did not feel ‘small’ while making references to these positions, and very candidly acknowledged these facts. It is a befitting reply to the critics of the parliamentary system.

Now, of course, the Bill has to go to the Select Committee as well as the Lok Sabha and it has to be ratified by half the states before the constitutional amendment takes effect, but then it is a good move and I am sure that those learned judges in the judiciary who have been pained by the murky goings on in the noble profession would welcome it. Let us be fair to these judges. They are the ones who have kept the flag of the judiciary flying high, and they are the ones who put in long hours painstakingly discharging a duty for monetary rewards that is very meagre to say the least. At last they deserve a better and more participative appointments and accountability process that this Bill hopes to provide. 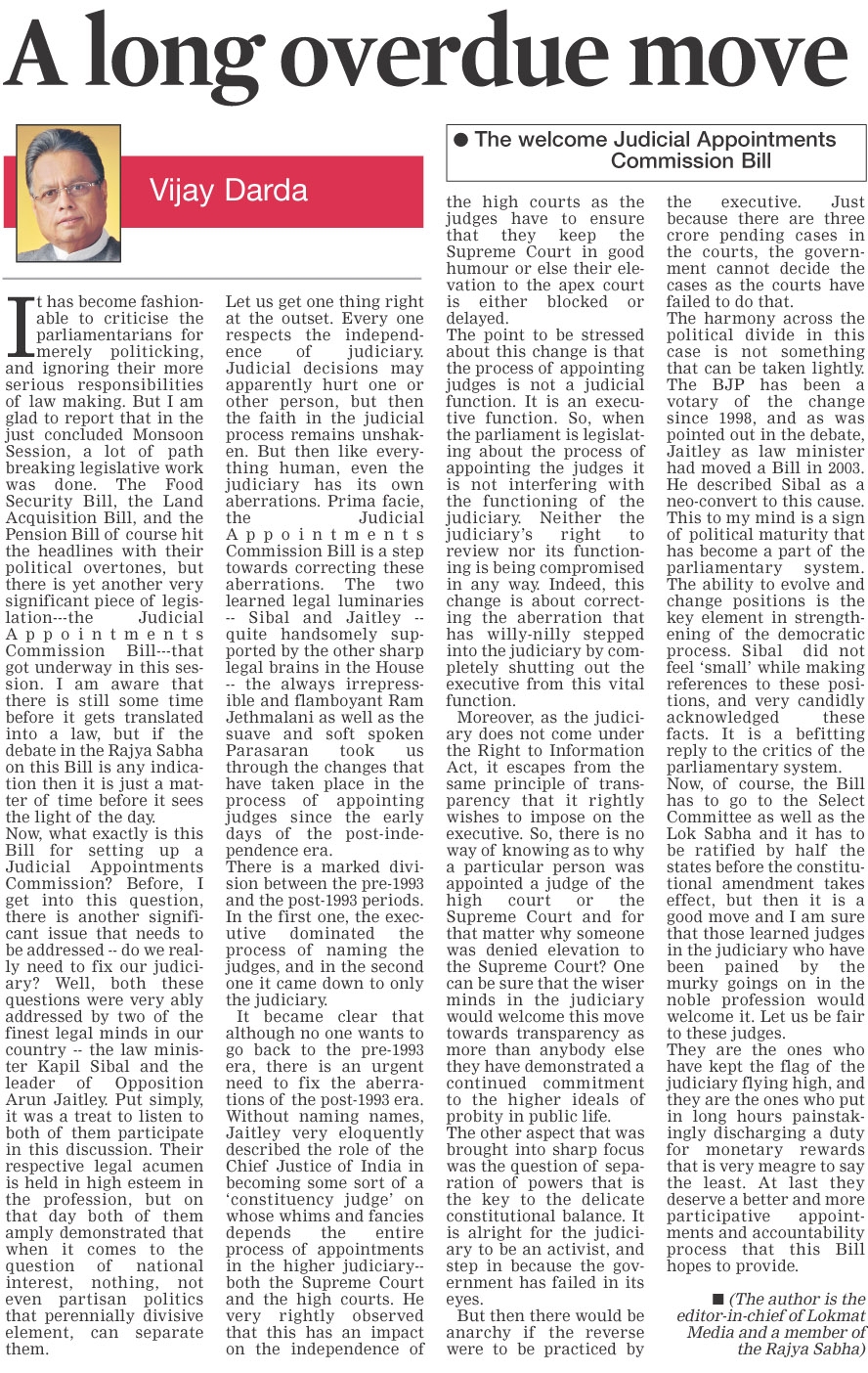 Just a handshake for SAARC’s sake