India is second in the world in terms of internet users, but it is far behind vis-a-vis cyber security

The news that the debit and credit cards of 1.3 million Indians are available for sale on a site on ‘Dark Web’ in itself is bizarre and worrisome. It is obvious that only cyber criminals will buy them and cheat or commit cyber robbery. This is not the first time this has happened. Only last year, it was reported that some 32 lakh debit/credit cards of Indians were hacked by criminals. How much loss has been caused to these card holders is not known exactly yet. Yes, it has been stated in the Norton Cyber Security Insight Report that in 2017, the Indians who were the victims of cybercrime lost $18.5 billion.

This report states that of all the people who use Internet in India, two of every five people invariably fall prey to some kind of cyber attack. They realise only after suffering the loss. The loss in India is usually not compensated. There are two reasons for this. One, there is no strong security system against cybercrime with no intensity in investigation and secondly, there is still not much awareness about insurance. There are only a few companies in the insurance sector which are offering this service. You will be surprised to know that the total cyber insurance business in India is only 1.6 per cent compared to the US. Most policies are taken by companies or institutions. Fewer people take the policy personally. This policy mainly compensates for losses due to recovery, phishing, email spoofing and unauthorised online transactions.

In America and the developed countries in Europe, the security situation seems much better. When my son Devendra was working after completing his studies in the US, the cyber criminals had withdrawn the entire amount from his bank account. After he complained to the bank, the matter was investigated promptly. You will be surprised to know that within eight days all the money was returned to the account. The situation is not so in our country even today. Although the Reserve Bank of India has issued several advisories, unfortunately there is no awareness among people.

Recently, people received an SMS saying that an amount of Rs 80,000 is being credited to their provident fund account. It also asked people to check their names in the list. When people opened the site, the PAN card number was being asked there. Obviously, those who did not exercise caution, must have fallen victim to it. Phishing messages in the name of banks and through phone calls keep coming but what is surprising is that people get trapped! In fact, with the world going digital at a faster pace, the threat of cyber attack is also increasing with the same speed. Your data is very important and it is being stolen. It is very difficult to understand when and how it will be misused.

A few days back, IT company Cisco released a report which clearly states that in the year 2018-19, there were a large number of cyber attacks on companies working in the field of banking, finance and infrastructure in India and on an average every company suffered a loss of about Rs 35 crore. But I believe that if cyber security is given due attention, it can be dealt with. In September this year, the first National Conference on Cybercrime Investigation and Cyber Forensics was held at CBI headquarters in New Delhi. Let’s hope a system will be put in place soon to enable India to crack down on cyber criminals.

There is an urgent need for India to be more vigilant because we are the second largest users of Internet in the world. Worldwide, 3.8 billion people use the Internet, of which 12 per cent are Indians. Even America, at eight per cent, is behind us. China is at number one with 21 per cent. We have many Apps to use for money transactions here. In such a situation, there is always a danger of cyber attack on banks. There have also been several incidents of Aadhaar data leakage. In fact, the companies to whom we give our data should also make strong security arrangements. Everyone knows the story of data leaks from Facebook. British Airways was even fined $229 million for this. Hackers are inventing new technology every day. We have to be on guard against them. I feel cybercrime is no less than terrorism by any measure. Terrorists kill people. Cyber criminals kill them financially.

And this news is worrying too that Indian politicians, businessmen, media houses, social activists, journalists and people associated with human rights are being spied through Israeli software. Congress on Sunday alleged that the party general secretary Priyanka Gandhi’s phone was hacked too. NCP leader Praful Patel too fell victim to such an attack. The question that arises is who is spying. The answer to this question must be found. If this question is not answered, several doubts arise. Why was such a situation of doubts created should also be deliberated upon. The government should strictly tighten the screws on numbers of such cyber criminals so that no Indian is afraid that their personal information may get stolen. The government should assure that it is there to protect them!

Just as the world of internet is expanding, so are cyber criminals. From banks and big companies to the common man, everyone is under cyber threat. In fact, cybercrime is no less than terrorism by any measure. It is not only a financial robbery but also an attack on the right to privacy. 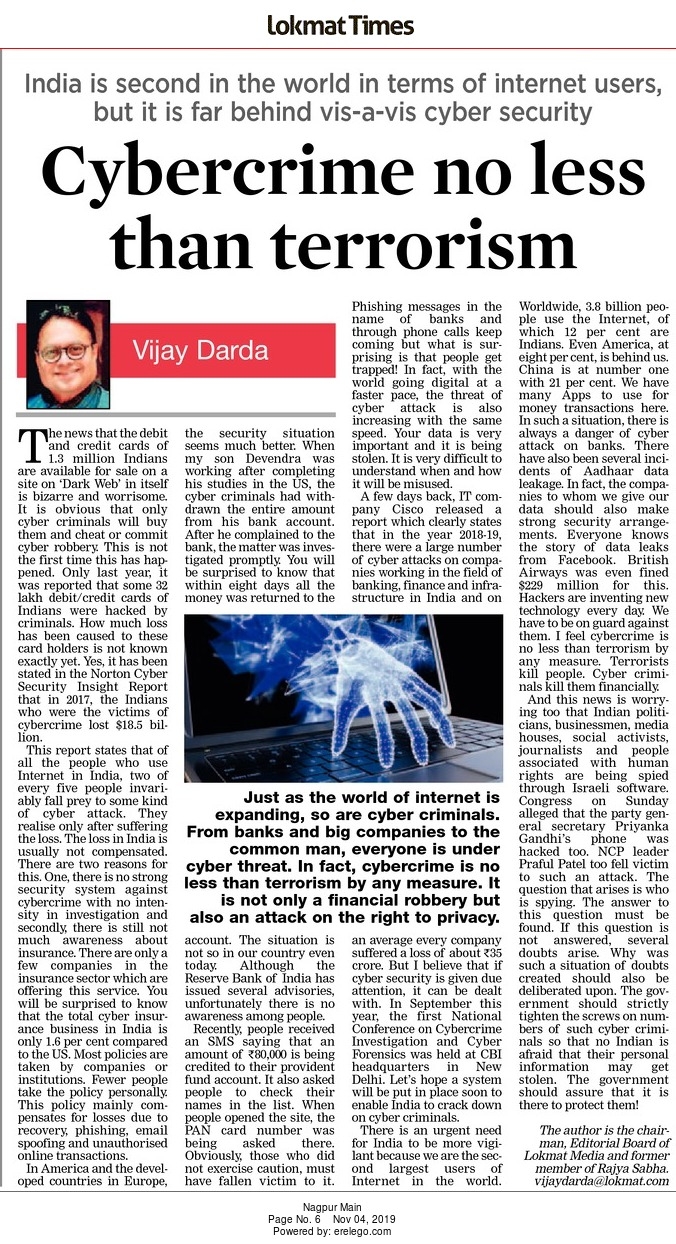 Playgrounds needed to save children from killer game