After his stunning victory, Prime Minister Narendra Modi had a good opening, as the show biz people will tell you. There was the emotional touch at his being elected the leader of the BJP Parliamentary Party, followed by an international array of politicians at his swearing-in that had the air and aura of a king’s coronation, capped by a right-sized ministry that has the Modi touch –minimum government, maximum governance –and then the precise and stern messages first through his ten commandments about good governance to the mantris, and then through his ‘main hoon na’ type pep talk to the babus who had retreated into their cocoons fearing the worst from the CBI, CVC, and the courts. In short, he packed it all and delivered the message loud and clear that a Modi-fied India means business, and you either perform or perish.

For starters, this has been music to the ears of all those who were reeling under the policy paralysis of the previous regime. One should not come to any hasty conclusions on the basis of the rise and rise of sensex right from the day the exit polls have indicated the advent of a Modi sarkar but that is one of the pointers to the air of optimism that prevails. True, the overall policy and plan contours of the new government would be unveiled when the President delivers his address to the joint session of both the Houses of parliament, and then the Prime Minister’s reply to the debate on the motion of thanks that would engage our attention during the course of the incoming week. But then the initial signs have been all encouraging.

Yet, well begun is only half done, and the remaining undone part is always the more difficult one. For instance, when Prime Minister Modi invited all the SAARC heads of government for his swearing-in, it was a brilliant masterstroke of diplomacy. In one fell swoop, he was announcing to the world, that gone was the chapter of the harsh campaign rhetoric, and he was here to kick start the serious business of engaging in dialogue as a way forward. This first step is of essence, and even for a moment it does not create the illusion that merely because it is a break from the past, it is the harbinger of all the good things. There is a lot of hard work to be done, and there are rocky and treacherous roads to be travelled in the quest of peace and good neighbourly relations. As they say it takes two for a tango, and the signs from across the border indicating the tensions between the civilian and military aspects of our democratic neighbour are far from encouraging. So, the hard work has just begun. But for the moment it is enough to celebrate the first step. It has been a long in coming.

The ministry has been put in place with an emphasis on performance and right sizing the government. Perhaps, the clubbing of the ministries is an idea whose time has been long overdue. The previous government did realise that the existing system was a major roadblock in the process of growth and development. So, rather late in the day, it had constituted a Prime Minister’s monitoring group for clearing projects and decisions were taken to fast track several projects worth a few lakh crores. But that was too late to redeem the government’s political fortunes, however, now with the abolition of groups of ministers and empowered groups of ministers that were a mere euphemism for delaying decisions, and making the PMO the referral point for such decisions, the Modi regime has taken the logical step forward. So, instead of the Prime Minister’s monitoring group, it is the PMO directly that would be fast-tracking the projects. This translates minimum government, maximum governance into action.

Likewise, the ‘main hoon na’ type reassurance to the babus was something that was long overdue. Everyone knows that even a fool can be wiser with the benefit of hindsight. So, post-facto anyone can question the wisdom of any policy decision. But the moot question is whether ab initio the decision was taken with proven malafide intent and were there any pecuniary gains involved in the process? Then again can you really hang someone merely on the basis of conjecture? Thus subjecting him to the agony of the tortuous judicial process before he finally gets his name cleared? By that time all irreparable damage is done. It was the fear of such consequences that had handcuffed the babus, and brought India to a standstill. In a Modi-fied India, the handcuffs have been removed.

However, the mere negation of the ills of the past regime is just well begun, and consequently half done. The real challenge lies in the half undone part. The essence of this challenge consists in unlocking the unlimited energies of the millions of youth who are simply waiting with bated breath to have a go at the future. They are the ones who powered this change of regime and placed their bets on the hope promised by campaigner Modi. For them, life in the competitive world of the 21st century is no bed of roses, indeed it is a daily challenge not just for survival, but then excelling every day, and in essence doing better than what they have achieved yesterday.

The Prime Minister has spoken of the 550 million who voted in this election, and whether they voted for him or not they and the rest of the millions have now no one else but him to look forward to in the next five years. He has asked for 60 months as compared to the 60 years of the Congress, and even though he did belittle the Congress achievements of this long span, the plain truth is that by his own standards and the benchmarks that he has set for himself, he has to excel the cumulative Congress performance. In that sense, the Modi show has just begun. 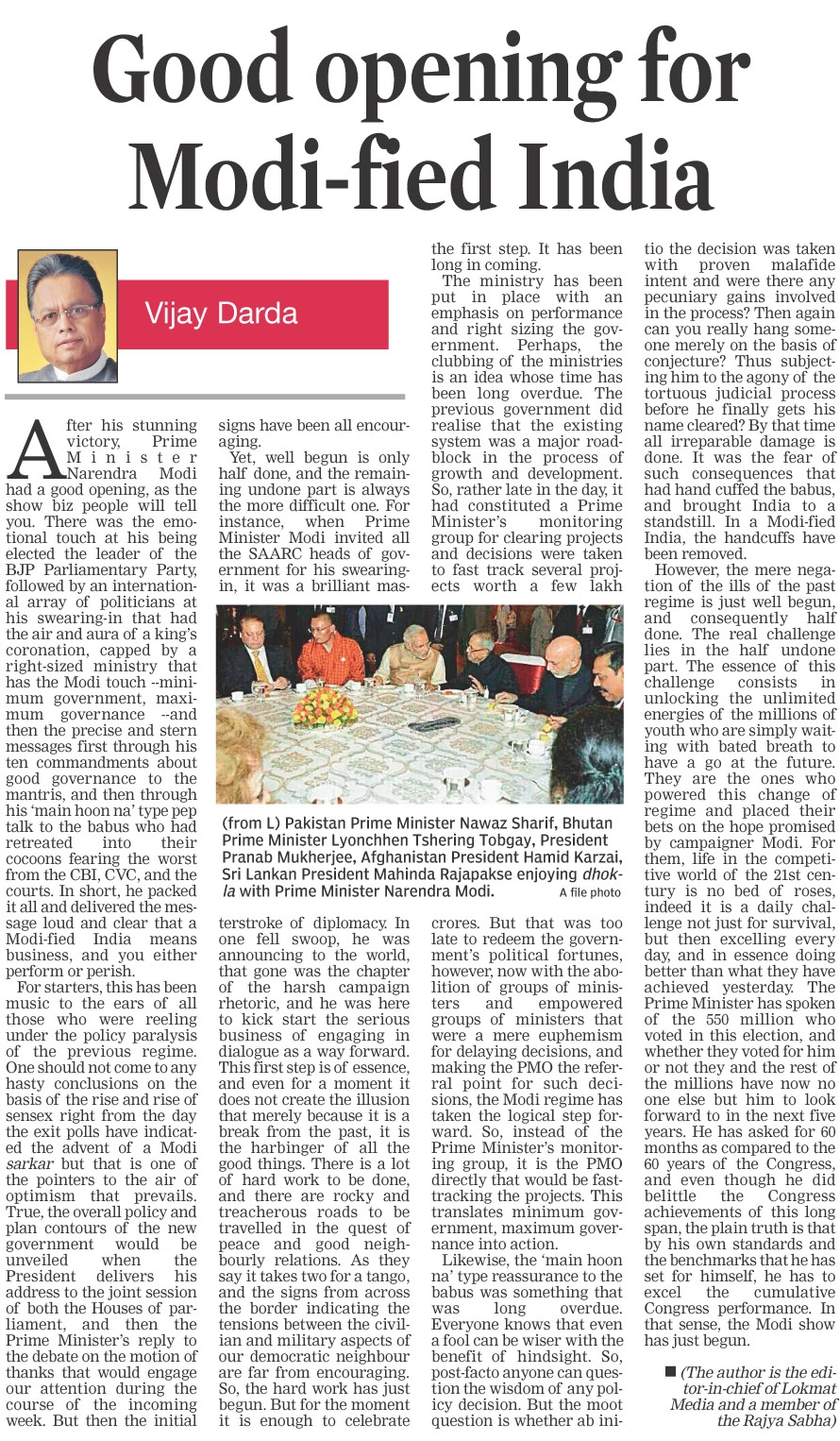