Democracy in Pakistan: Not a few reasons to cheer

In our country, we have become used to democratic transition of power. More than six decades after the British left our shores, and we gave ourselves a Westminister style parliamentary democracy, governments have changed hands both at the state and the Central level with a maturity that has earned us the ungrudging respect and admiration all over the globe as the biggest functioning democracy. But unfortunately, this has not been the case with our neighbour – Pakistan. For reasons that are too numerous to be recounted in this brief essay, they have not been able to have a democratic system. Self-appointed guardians of the democratic system have attributed it to various elements, including the irrational logic that the religion of Islam is unfit for it.

But we know from our experience that our Muslim brethren embrace democracy with the same ease as folks from any other religion. Thus when on May 11, the people of Pakistan voted for the first time in their history for the transition from one elected government to another, there were not a few reasons to cheer. More than anything a people condemned by the Western world to swinging between military dictatorships and unstable and perhaps ramshackle civilian administrations were truly liberated and finally found their voice in shaping their own destiny. Let us not belittle the significance of this achievement, by nit-picking on the imperfections. We all know that democracy is an imperfect system, but a better one is still to be invented by mankind.

Coming to the specifics of the outcome, we now have Nawaz Sharif at the helm of affairs in our neighbourhood. At a personal level, I have had the privilege and honour of a few interactions and sharing his hospitality at his Lahore residence a few years back as a member of a parliamentary delegation. He has always come across as a warm person, and one who deeply regrets the Kargil episode that took place during his last tenure.

But then let us not make any mistake, he is equally convinced that this was ‘something that happened behind his back’ and years after the episode wants that the ‘wrong should be redressed.’ I also recall the firmness with which he laid out the contours of the Kashmir solution when I had questioned about him in the 90s at the United Nations. “You will neither get Azad Kashmir, and nor will get the Kashmir that you have,”- these words still ring afresh in my mind.

Little wonder that he has been making some very positive noises about Pakistan’s relations with us. But then going by the past experience, it would serve us well to be cautiously optimistic about everything. The best approach would be to see as to whether Mian Saab –as Sharif is referred by his admirers — actually walks the talk. In sum, what does he deliver? Does he merely make promises only to forget them, or actually delivers on them? I have shared my concerns with the Pakistani intelligentsia, and seasoned watchers of the political developments ( author and film-maker Javed Jabbar my learned friend being one of them, incidentally he has promised to be with me in Nagpur this August), and at this stage I can only say that I look forward to the next few weeks with my fingers crossed.

They tell me that being essentially a businessman, Sharif will give a fresh impetus to trade relations, indeed they inform that quietly without not much of a sound the volume of mutual trade has gone up and needless to add, India as the bigger partner has an upper hand (and refreshingly this is something that they do not grudge) and this would continue to happen. For both of us the optimal thing would be to sustain it at a level, that makes any kind of hostility simply untenable on both the sides.

They have been equally sanguine about the role of the Army in the country now, and perhaps instead of an Army that had a country called Pakistan for itself, and kept it at its mercy the situation would change to being what it is like in other democracies. Indeed, the army would be under the prime minister, and it is expected that the generals would stop playing their usual tricks. After all General Ashfaq Kayani has a few months to go, as the army chief, and the manner in which the courts have dealt with the one-time dictator Gen Pervez Musharraf is not lost on him. But then my friends are less than sanguine when it comes to their assessment of the manner in which Nawaz Sharif is placed to tackle the domestic challenges – the foremost being the one posed by the Talibani elements.

Given their hard line approach and the capacity to inflict violence disturbingly and brutally they are a hard nut to crack, and it would require harnessing of the multi-dimensional capacities of a state and administration to come to some kind of a stable equilibrium with them. However, there is one redeeming feature that stems from the details of the polling results. This is almost negligible electoral support from the rigid religious parties. Once again they have been rejected by the people, and they have got a minuscule share of votes in single digit percentages. In a way, this is a heartening sign that reinforces the belief that the people do not support religious parties, and may be the fanatics in our country shall also imbibe this universal lesson.

During my previous visit to Pakistan, I also had the opportunity to interact with the cricketer-turned politician Imran Khan. I must say that I am a bit disappointed by his charge that large- scale rigging damaged his chances. Even in politics, he has not been able to overcome the tendency to blame others for his defeat. There is no doubt that he is popular with the young crowd, and his criticism of the corrupt politicians — his argument that a dog’s tail always remains twisted — touches a chord with the people when he talks of endemic corruption among politicians — but then this approach has its own limitations, and the elections have exposed it.

Imran is charismatic and is not known to take losses in his stride, but I can only hope that he realises that the second party in a democracy, has an equally important role in the functioning of the elected system, and he should be able to harness his popularity to come up an alternative and sustainable political strategy for Pakistan’s development. Indeed, only if he can unveil this strategy convincingly, Imran would be making the transition to be level of the game changing national leader he aspires to be. Or else, sadly, he would remain as an also ran. 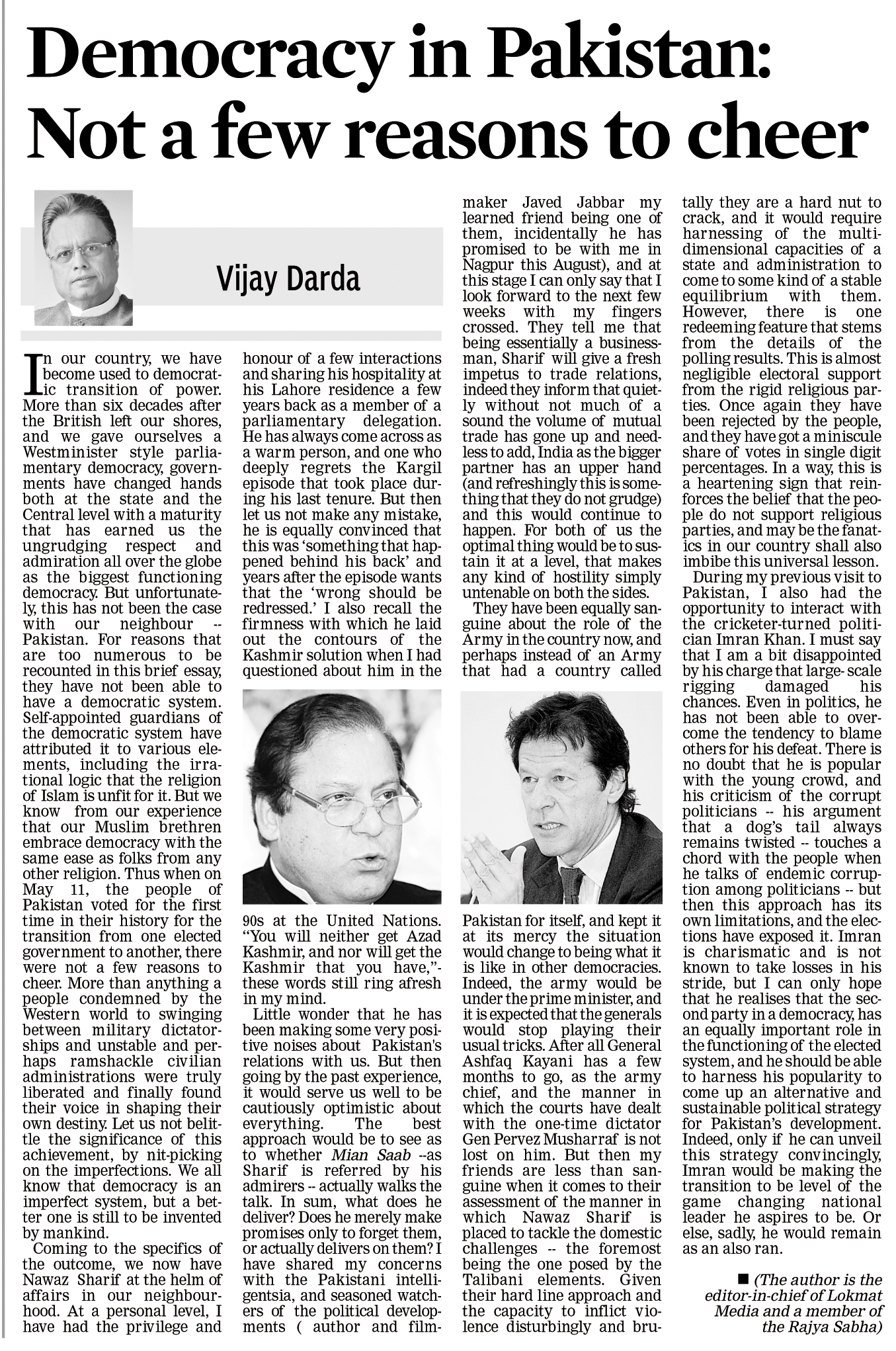