As a practicing politician, and a media person, I am aware that the suggestion that I am making will sound amateurish. But cooler reflection on the part of everyone concerned will reveal that sooner or later this is the only right course of action, and taking any other route will have costly and avoidable repercussions.

My suggestion, like all solutions to complex problems, is very simple. Now that the Congress party has announced its irrevocable decision to carve out the separate state of Telangana from Andhra Pradesh, and wisely corrected a 56-year-old mistake without much ado, the state of Maharashtra should also be generous and admit that the inclusion of Vidarbha 53 years ago was also a similar mistake and would be corrected immediately by allowing that separate state of Vidarbha to come into existence along with Telangana.

Maharashtra has several wise men as its leaders –there is the experienced administrator and politician Sharad Pawar who has the ability to look into the future. I believe that more than anybody else he realises that the Vidarbha experiment has failed the people of Vidarbha. We have a chief minister who has tons of administrative experience and has fully realised that the state of Maharashtra has failed to serve the people of Vidarbha, and the best thing is to let them go and be on their own. If the people of Andhra could not hold the people of Telangana, then it only follows that Vidarbha experience would be no different. Now the only question that remains in the context of Vidarbha is not that whether it should be granted statehood or not, but that when should it be granted its freedom? Should it be done in the manner of wise men who see the writing on the wall and take steps like statesmen or should be after yet another bitter, long, painful and distressing struggle?

For those who have argued that the people’s demand for Vidarbha is not as intense as the emotional struggle for Telangana and hence as painful and distressing, I only wish to point out that let us not wait for many more expressions of painful disgust than farmers suicides. Let us not believe that self-immolations, violence, and burning of public property or resignations by public representatives are the only expressions of emotional intensity. Let us also go by the force of rational discourse and for once side step the conventional form of agitational politics before coming to an inevitable decision.

Can the leaders of western Maharashtra now argue after five decades with any conviction that Vidarbha will ever get its due in their dispensation? When they scoff at the farmers’ suicides and go to the extent of blaming the farmers themselves for their plight can it ever be expected that they shall take measures that shall ever take measures to tackle the root causes of the agrarian crisis? Can they frankly accept that for them Vidarbha is nothing but a colony from which they want to extract all the raw materials, and get the power to run their industrial enterprises?

The case for a separate Vidarbha as a viable state was settled by the Justice Fazl Ali Commission when it submitted its report on states reorganisation commission. It was an emotional blackmail in the name of Maharashtrian linguistic unity that saw Vidarbha getting lured into the trap of one Marathi speaking state. The first impact was that perhaps the first and only instance of a capital city – Nagpur- losing its grand status in the history of urban areas. A capital fully equipped with a governor house, a legislature and secretariat building, a high court and all the trappings of administrative apparatus first got reduced to a second capital, and then to the level of a mere divisional headquarters, that also got bifurcated after some time.

Let us accept that the ‘one language one state’ formula does not hold validity anymore. The Shiv Sena should give up its rigid thinking and generously accept that there can be two states that have Marathi as their official language. If Hindi can have eight states, and Telugu is now going to have two states, so why deprive the Marathi speaking people of Vidarbha from having another state? This way, the Shiv Sena would also become a party that has its presence in more than one state.

There is no merit in the Shiv Sena’s argument that the people of Vidarbha do not want a separate state as it contests and wins elections from this region. This is a flawed argument. In the first place the general elections whether for the parliament or assembly are not a referendum for a separate Vidarbha. Moreover, like other parties, the Shiv Sena also contests these elections and succeeds or fails like others. Even in other states the parties opposed to the division of a particular state like the Rashtriya Janata Dal first in Bihar and subsequently in the bifurcated Jharkhand have played this role.

I am aware that the politics of forming separate states could not allow a smooth sailing for Vidarbha. But if this were to happen, it would not only be painful, but would also show that our leaders could not rise to the occasion and have let the people down. Congress president Sonia Gandhi and all the top leaders associated with the Telangana decision making process, including those from the Andhra region have demonstrated commendable political sagacity and acumen in coming to a decision that seemed unlikely a few weeks ago. Indeed, the swiftness with which they have resolved the issue that was pending for decades shows the strength and firmness of their political will.

The people of Vidarbha who have stood by the Congress party and the Nehru-Gandhi family through decades are not expecting too much when they nurse an aspiration that the leadership would display the same strong will and grant them a separate state. After all, the Congress leadership has always been convinced of the genuine demand of the people, and it is only the temporary political situation that has thwarted this demand.

As the creation of Telangana moves forward, we can expect that there would be similar surge in Vidarbha, and the feeling of neglect that has gained permanence in the people’s mind would get further entrenched. The feeling of being let down once again, is already there and for a region that is oppressed, backward and economically stressed, this does not augur well when the state government seems unconcerned about the people’s plight.

Now is the time for the rest of Maharashtra to back the cause of separate Vidarbha and admit that things have gone wrong over the past few decades. This is the only way in which the past mistakes can be corrected. 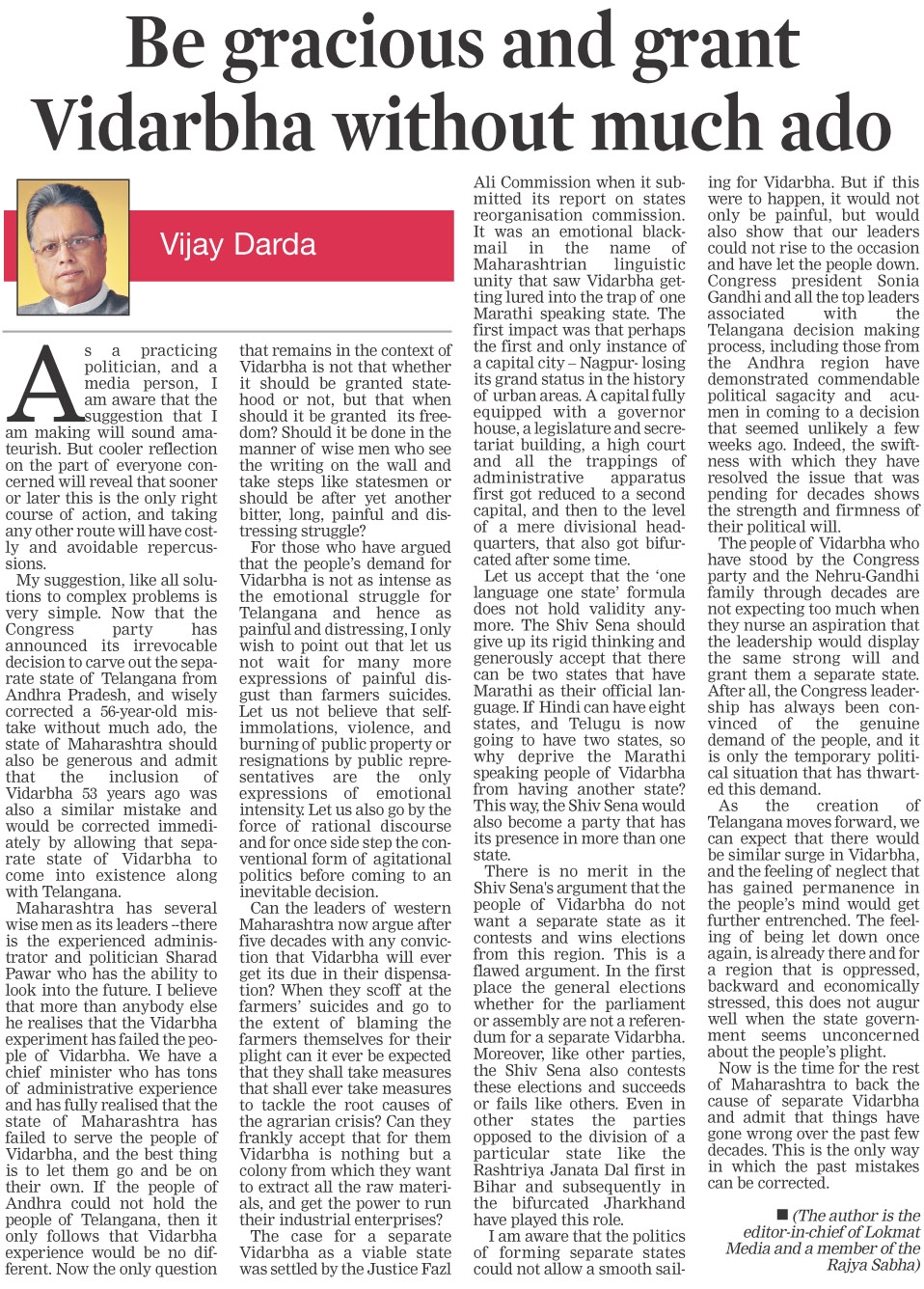