There is hardly any soul that does not suffer from pains and sorrows. As the poet put it eloquently in a couplet: “Woh kaun hai duniya mein jise gham nahin hota, kis ghar mein khushi hoti hai matam nahin hota”.

Ups and downs, sorrows and joys are like inseparable twins in our life. Even the best of joys is sometimes tempered with some sorrow. But today is an altogether different day. It is Diwali, the festival that extinguishes all darkness. We have to give up our sorrows and rejoice in the strength of the hope this festival brings in our lives.

To celebrate Diwali is to give an expression to the ultimate in happiness. In colloquial terms, when someone is blessed with something of extreme joy, even on a routine workday, it is said that he is enjoying Diwali. Right through the mythological days of Lord Rama and his victory over the forces of evil as represented by Ravana, this is one occasion that has the capacity to undo all negatives. It is a great social equaliser, as everyone rich or poor celebrates it with the same spirit of happiness.

This year, there is a special reason for all of us to celebrate. The US Congress and Senate for the first time have passed resolutions that congratulate Indian Americans on the occasion of this festival of lights. This is just a reaffirmation of the tradition that began with President George W Bush in 2003 and has been retained by President Barack Obama and first lady Michelle. They host a Diwali dinner at the White House, where the First Lady delivers the message. But President Obama has captured the essence of this festival. In a touching message, he said: “Dancing, celebration, and good food remind us that life’s greatest joys are the simple pleasures that come from spending time with people we love.

Contemplation and prayer remind us that people of all faiths have an obligation to perform seva, or service to others. And the flame of the diya, or lamp, reminds us that light will ultimately triumph over darkness.” But then it is not just America that celebrates Diwali now. It is celebrated all over the globe as Indians now have a formidable presence in most countries. This ‘diya’ is the symbol of this festival. It looks humble but is a powerful metaphor for fighting and eliminating all forces of darkness. To keep the diya or the lamp alive in order to fight darkness is to wage an unending battle against all forces of evil. For the under-privileged, this “diya’ signifies the hope that darkness is being dispelled.

It is a confluence of the spiritual powers that diverse religions — Hinduism, Jainism, and Sikhism — celebrate the same festival on the same day for different reasons. For the Hindus, it is the return of a victorious Lord Rama to Ayodhya ending his 14-year-long exile, for the Jains it marks the attainment of nirvana by Lord Mahavira, and for the Sikhs, Diwali is the celebration of the return of their sixth Guru — Hargovind — who was released from prison.

We are told different mythological tales about the significance of each of the five days of the Diwali festival. For instance, it is considered auspicious to light a lamp and buy gold on the day of Dhanteras for a long and happy life. This is because folklore has that the wife of a king, who was accursed to die young, had spread all gold and silver around her husband and put up dazzling diyas so that when Lord Yama came to pickup her husband he was totally blinded by the glitter of the gold and the glow of the diyas.

So, the festival has a larger than life significance for the married ladies who wish that their husbands live long, and thus they donate a ‘diya’ and buy some gold. In the same way, on the night of Diwali, the diya is kept alive for the whole night in all homes so that Goddess Lakshmi can find her way into every household even during the dark night and shower her blessings.

Now, every region has different customs and practices, but the core element of celebration and making a new beginning is common to all. The fire crackers keep on bursting from early morning — the brahmamuhurta — till late night, and this gives joy even to those who do not light these crackers themselves. For the under-privileged, the mere sight of the bursting crackers and their noise provides the joy, and gives an aspirational content for their lives. They all long for the day when they would themselves be celebrating the festival with the same fervour and element of participation.

For the business community, this occasion has a special significance as they begin their new accounting year. They may maintain their account books as per the official financial year for tax purposes, but in the real sense the new year begins for them with Diwali. The share market always has a special Diwali session, and notwithstanding the economic slowdown, we have been witnessing an upsurge in the sensex over the last few days. Apart from everything else, this is upbeat spirit of Diwali.

For the jawans of our army who are separated from their near and dear ones as they answer the call of their duty to the nation, the Diwali festival on the borders can at times have a different connotation. For them, the booming guns are their version of our fire crackers. During a phase when the relationship across the border is less turbulent, this occasion is even marked by sharing of sweets, but then such times have been rare. The Indian economy has been going through a phase of gloom for the past few months, the prices are high and there are many areas of concern. But then nothing dampens the Diwali spirit of celebration, and just as ‘diya’ glows all night to dispel darkness, and create hope, we can also hope that the economy shall turn around. 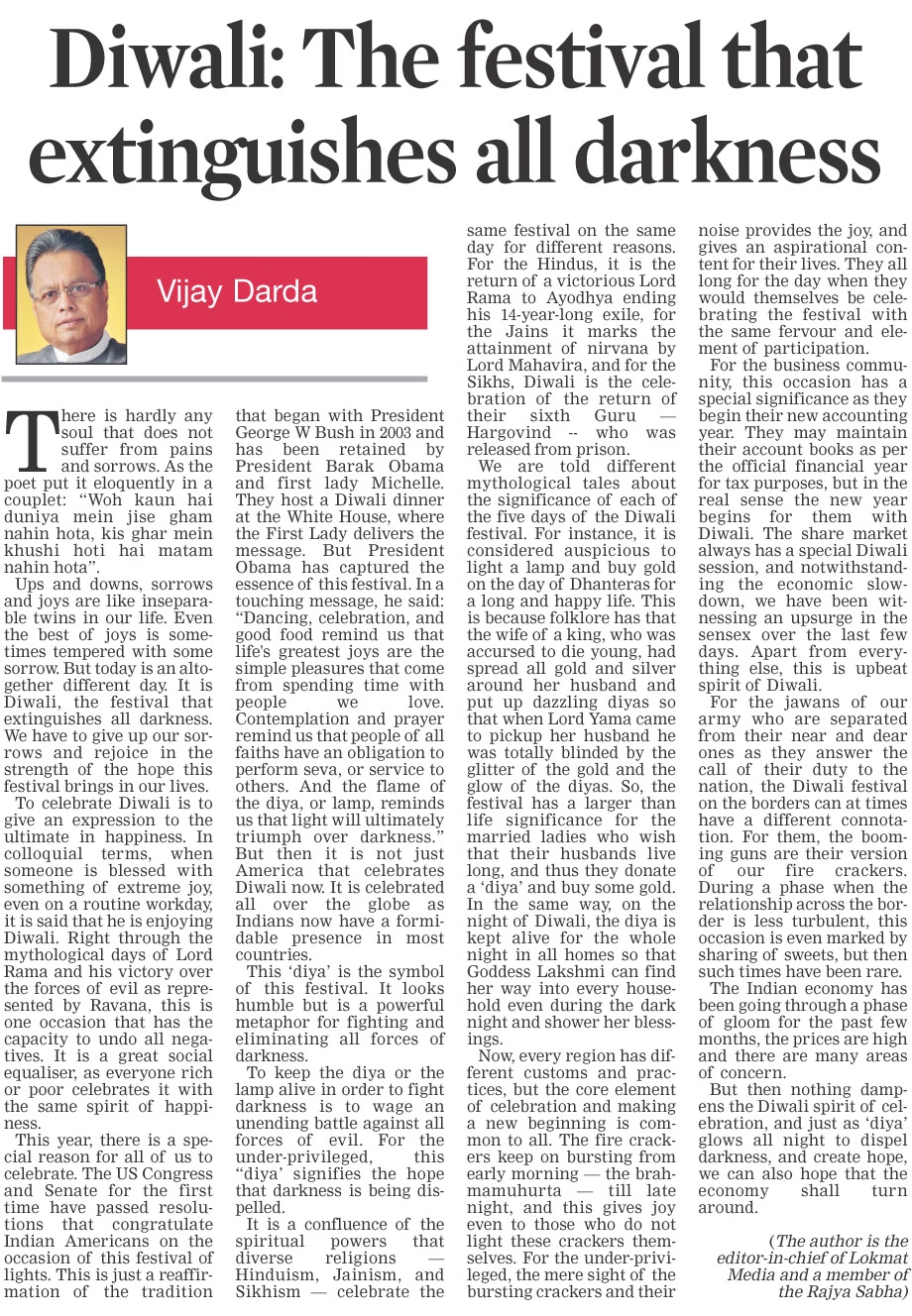 Those who preach hatred must be taught a lesson