No crisis has dampened the spirit of human beings, who have never stopped nor will they ever do!

Even in the moonless dark night, when a lamp burns silently, it does not let the darkness remain anywhere near it. And when thousands of lamps are lit, the darkness vanishes into nothingness. When thousands of lamps glow, even the stars twinkling in the sky disappear too. This is the effect of Diwali. It is also euphoric, ecstatic and there is a philosophy behind it that emphasises that if all of us light lamps, darkness will not persist anywhere. We celebrate Diwali every year with this spirit. But this time the situation is severe.

None of us have seen such a Diwali in our lifetime. There was a war with China and Pakistan, there was a famine but the situation was never like this. Today, the economic condition of everyone is bad and many people have lost their near and dear ones. The crisis is still not over, but we should hope that the human spirit and courage will surely defeat this pandemic. Hope is life and if we are determined, this hope is no less than eternal bliss. The spirit of man is so strong that no one can stop him nor has anyone ever been able to. Elections were held in the US and Bihar in this difficult situation. This is encouraging!

Did the people stop worshiping when the temples were closed? People made their inner self a temple and in fact this is the right way of worship. This time, Panditji will not come to perform traditional pooja. People will become pundits themselves and will perform rites and rituals besides worshipping the almighty themselves. I feel that the worship done by oneself is better than the worship through someone.

If you look at the mythology, it is only after facing great crises that the foundation of the festival of happiness and lights, Diwali, was laid. Some mythological stories may have been heard by many of you, but a majority of the youths of the present generation may not know why Diwali is celebrated. This story is so popular that when Lord Shri Ram returned to Ayodhya after killing Ravan, the townspeople welcomed him by lighting lamps. This brighter festival was named Diwali. Apart from this, more stories are popular. When Lord Vishnu took the form of Narasimha and killed the demon king Hiranyakashyap, people lit lamps of ghee to express their joy.

It is also believed that Lord Krishna killed Narakasur on Chaturdashi. Elated at the death of the dreaded demon, people expressed their joy the next day by lighting lamps. There is also a belief that even after killing the demons, the anger of Mother Kali did not abate. Following this, Lord Shiva lay down at her feet after which Mother Kali’s anger abated after touching him. Since then, the worship of Mother Laxmi, the peaceful form of the mother, began. It is also believed that Diwali signifies the return of the Pandavas after 12 years of ‘vanvas’ and an year of ‘agyatavas’. If we consider any story to be true, the essence of all these mythologies is that whenever people overcame any crisis, they lighted lamps in joy, laying foundation for Diwali celebration. Over time, colourful bulbs have replaced lamps, but the reality is that no matter how modern we become, electric bulbs cannot replace earthen lamps which are full of ‘panchtatva’ elements. That is why we light the lamps, symbolic of good omen.

However, once again a demon with a subtle but very fierce tendency stands before us. We know this as the coronavirus of the corona family. We should hope that we will defeat this monster too. If we keep the lamp of knowledge and discipline aglow inside us, even the remaining virus will die. All that is needed is to maintain our inner motivation and courage. Keep your spirits high.

Yes, in the context of Diwali, I urge all of you to avoid firecrackers.

These firecrackers claim lives of hundreds of people every year or cause crippling injuries. There is no count of how many animals and birds die. A lot of pollution also spreads on account of it. Indulging in this kind of expression of joy is nothing but sheer ignorance. If we want to seek knowledge, we have to abandon the path of ignorance. According to an assessment, crackers worth about Rs 2,600 crore are burst during Diwali in our country every year. Better keep in mind that burning gunpowder is not a part of our culture at all. We belong to a culture that worships nature, so how can we harm nature by igniting gunpowder? Fireworks were invented by China in the seventh century. After that, it became popular in the world between 1200 and 1700.

This evil clung to us at some point of time and has stuck to us ever since. Those who are sensible are getting away from it. Some people become so sensitive about the tradition that they feel that not allowing them to burst firecrackers is an attack on their tradition, which is not so. If you want, you can ignite a sparkler as a token of good omen! By the way, let me tell you that even a sparkler causes as much damage as 74 cigarettes. Anar or flower pots are the most popular Diwali firecrackers but they too cause as much damage as 34 cigarettes. In short, bursting crackers means to harm oneself along with others. Therefore, here is an appeal to not turn this Diwali into a festival of smoke, bursting firecrackers and noise.

So enjoy the festival of lights, have a lot of fun with family and friends, light lamps, get overwhelmed with joy. Yes, maintain safe distance. I pray to Mother Laxmi to bless every farmer, labourer and the alert soldiers and policemen posted everywhere, right from the borders to the roads so that they can have a blissful and peaceful Diwali.

Happy Diwali to all of you!

Diwali has never been like this ever before. I pray that such a Diwali never comes again! The condition is severe but history bears witness to the fact that no crisis, howsoever grim, has ever been able to dampen the spirit of human beings. Man has never stopped nor will he ever do! The spirit to prevail is embedded in man. Therefore, no matter how dark it gets, light will always pierce darkness. 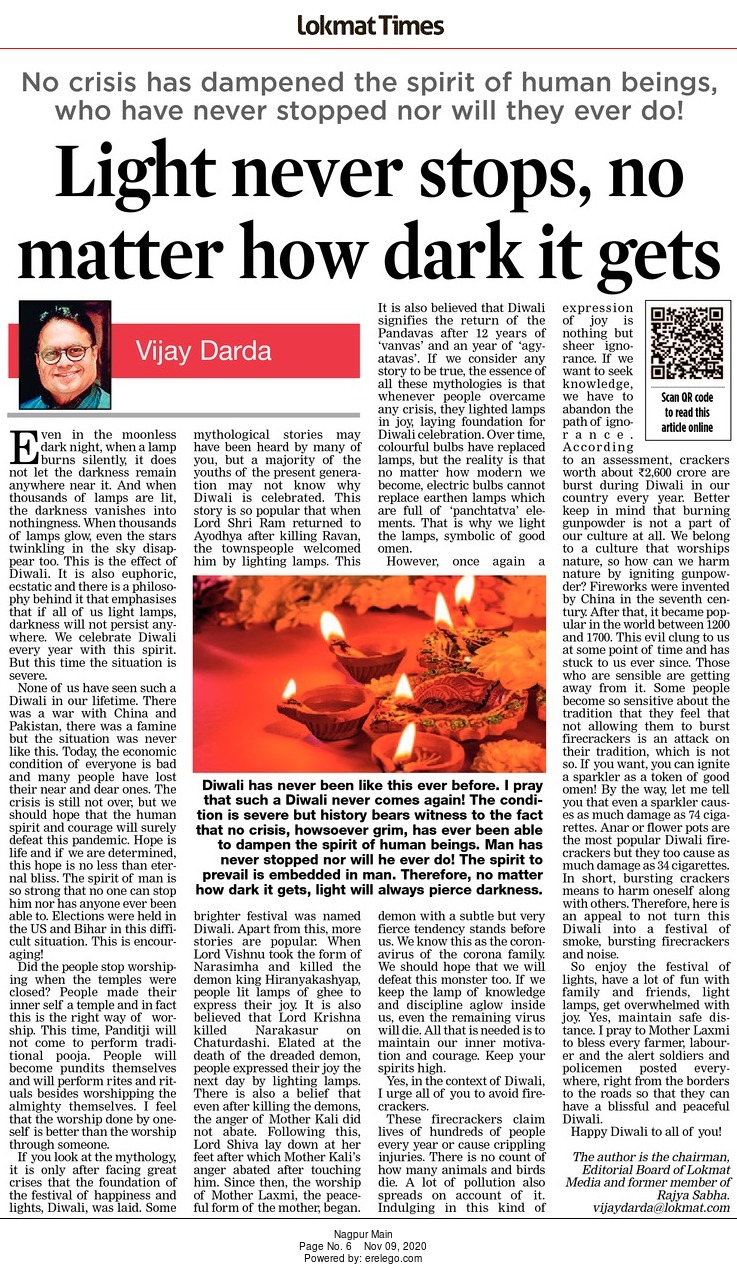