The forgiveness, non-violence and non-acquisition in Jain philosophy are the best gifts to the world. This philosophy has the value of non-violence. If everyone accepts and applies this philosophy in life, the whole world will change. Brotherhood will make everyone happy, prosperous and cultured, said the chairman of editorial board of Lokmat Media and former member of Rajya Sabha Vijay Darda.

Vijay Darda felicitated Darshan Dugad, hailing from Arni in Yavatmal district, at Lokmat Bhavan by presenting him a bouquet for emerging 138th in the country and second in Vidarbha in the UPSC civil services examination. Vijay Darda also presented Darshan books ‘Straight Thoughts’ and ‘Public Issues Before Parliament’ authored by him and ‘Majhi Bhint’ written by the editor-in-chief of Lokmat Media Rajendra Darda.

While blessing and honouring Darshan, Vijay Darda said, “Values are best feature of our Indian culture. Our sages and seers have given the world the science of living. Former President APJ Abdul Kalam and Jain Acharya Mahapradnyaji propagated this philosophy everywhere. This legacy of values should be carried forward. What we are today is because of our parents. They are the gods and there is nothing beyond them. The values taught by the mother and the direction shown by the father are the best philosophies. Never forget them and scale the peaks of success. The opportunity that you are getting should be used to serve the interest and protect the honour of the common man, as also pave the way to do justice to them.” Expressing his gratitude, Darshan Dugad said he will always remember Vijay Darda’s insightful guidance. 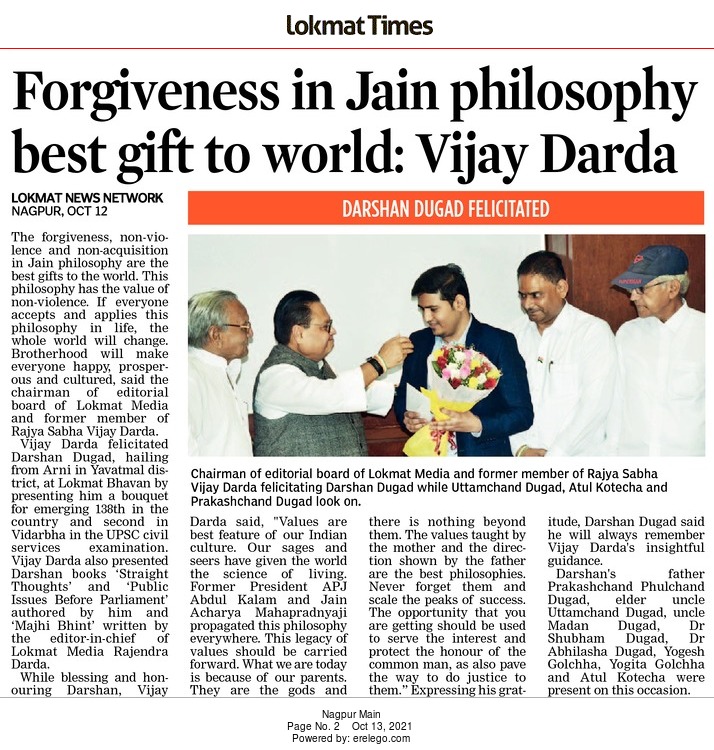 Forgiveness has power to make world a paradise