Horrendous atrocities being committed on women and girls in Afghanistan

A short video clip uploaded by an international news channel has shaken me to the core. In that video, a fourteen-fifteen-year-old girl is seen screaming and shrieking. Her parents are begging for mercy but Taliban terrorists are forcibly taking away the girl from the family. The girl will now be turned over to some Taliban terrorist to quench his lust. If that monster is killed someday in the war, then the child will be given to another monster! This is the fate of that girl!

And that girl is not the only unlucky one. This is the fate of lakhs of girls like her in Afghanistan. In the areas which the Taliban has occupied so far, they have started barbarity in the name of Sharia. It has decreed that a list of unmarried girls above the age of fifteen years and widows should be prepared. It is evident that all these girls and women will be used for quenching the lust of terrorists. Although the leadership of the Taliban based in Qatar is ruling out such incidents, the Taliban terrorists who are bloodying Afghan soil are kidnapping girls every day. In those areas, even the media is not working now so that the whole truth could come out. But the pictures and news that are coming out after filtering fill the mind with pain.

When the Taliban captured the whole of Afghanistan in 1996, it was women who had to bear the brunt of their brutality. The education of the girls had stopped. You must recall how an attempt was made on Malala because she was secretly spreading her voice to the world in favour of the education of the children. So will the girls be imprisoned in homes again? When asked, Suhail Shaheen, Taliban spokesman in Qatar, said that women will have freedom of education and work but under Sharia law they will also have to wear hijab. Let us remind you that during the Taliban regime from 1996 to 2001, it became notorious for their misogyny and violence against women. The women who did not wear the hijab or even those, whose fingers were visible, were also lashed publicly. A woman could not step out of the house without a male member of her household accompanying her. The actions of the Taliban are showing that the old dark days and dreadful nights are about to return.

When American troops landed on Afghanistan’s soil in 2001 and the Taliban started shrinking, there was a ray of light in the lives of the women there. The girls started going to school. Cruelty to women decreased. Women started going out for work. A lot has changed in Afghanistan in the last 20 years. But when America suddenly decided to withdraw its troops from Afghanistan, the ground slipped under the feet of the women of Afghanistan. Who will stop the Taliban now? However, the rural women there have an inborn conditioning to discrimination because no woman’s name is even taken outside the house. Even on the doctor’s prescription slip it is written ‘daughter of so and so’ or ‘wife of so and so’. Her name is neither on her birth certificate nor on her death certificate. This irony is a part of their life. But the condition in urban areas was getting better. The arrival of the Taliban has raised a fog of fear and suspicion. The problem is that in Afghanistan there is no one to raise the voice of women and anyway, Taliban does not listen to anyone’s voice.

Interestingly, this time some brave Afghan women have come forward to raise their voice against the Taliban. In Afghanistan’s urban areas such as Kabul, Faryab, Herat, Jowzjan and Ghowr, hundreds of Afghan women took to the streets carrying Kalashnikov rifles and Afghan flags. They are trying to show to the world that they do not approve of Taliban rule. That is why they are with the National Army in the war against the Taliban and the barbaric terrorists should also understand that women are not lumps of meat for their lust. They too can fight the war and are ready for the war. It is possible that the Afghan army will also train and equip such brave women. However, in cities it may be possible to join and fight alongside the National Army, but what will happen in rural areas?

The painful and bitter reality of the present time is that the Afghan army has also left the rural areas defenceless. The Afghan National Army is focusing all attention on the security of the country’s capital Kabul and various provincial cities. The Taliban took advantage of this vacuum immediately and took over the rural areas. Right now it is difficult to say how much of the country is with the Taliban and how much is with the army. But wherever there is Taliban, the life of women has become worse than hell. The number of women in Afghanistan’s population of 3.80 crore is about 1.8 crore. Today, after two decades of tasting freedom, Afghan women and girls are again scared of a repeat of that dark era of confinement as the Taliban advances and the world remains a mute spectator!

I feel like crying at the plight of these women..! 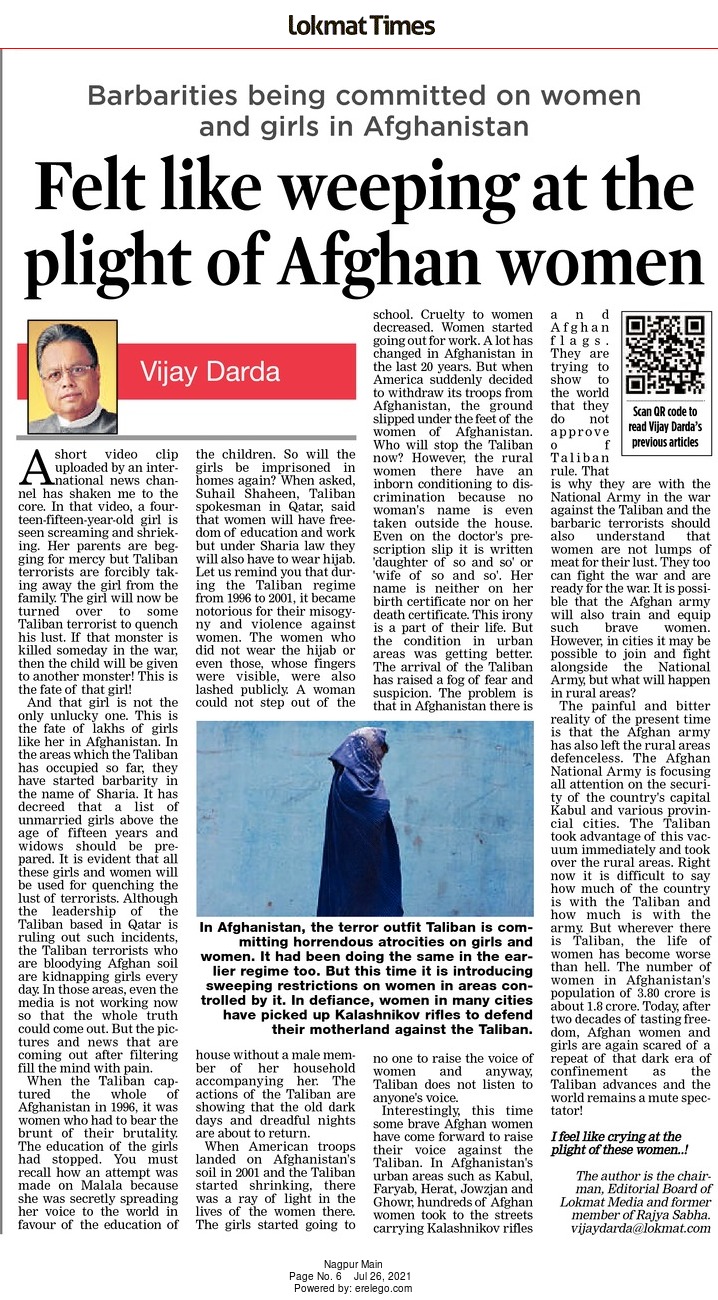