Peace deal between Israel and the UAE is a major development, will Saudi Arabia follow suit too?

The landmark agreement between Israel and the United Arab Emirates (UAE) to normalise their relations by burying the hatchet is a significant move considering that both were sworn enemies for years. Ever since the formation of State of Israel in 1948, the Gulf countries have always wanted Israel to cease to exist and hoist the flag of Palestine on its land. That is why the Gulf countries never recognised Israel as a nation. Despite all the protests and opposition, Israel flourished and has established itself as a strong and developed country today.

Israel entered into a peace deal with Egypt in 1979 and Jordan in 1994. Israel has good relations with both these countries but continues to have an uneasy relationship with the rest of the Arab countries. So the question is what exactly brought the UAE and Israel to the negotiating table and ink a peace deal? The second question is, will this agreement be lasting? And the third question is, what will be its impact on a broader scale? Actually, the US has played a major role in bringing about this agreement. There are two reasons for this as well. The first is that the US is a known adversary of Iran. Therefore, Iran has joined forces with China to counter the US. Speculation is rife that China has already entered into a grand alliance with Iran on the sly. The US does not want any country to buy oil from Iran, but China has made it clear that it will buy the Iranian oil!

To keep Iran under control, the US wants Israel to join hands with those countries that have enmity with Iran. These countries include the UAE and Saudi Arabia. The second reason is that after the heavy losses due to the coronavirus pandemic, it will not be possible for the US to keep its troops deployed in various countries. Therefore, it wants Israel to act as a representative of the US in West Asia, besides balancing the power against Iran the way it so desires. It is speculated in diplomatic circles that after its agreement with the UAE, Israel may also enter into an agreement with Saudi Arabia. Of course, the US also wants this deal to take place. As far as Saudi Arabia is concerned, it has stated that peace can be established only when Israel gives up its ‘plan to occupy the West Bank’. If Israel agrees, it is possible that there will be an agreement with Saudi Arabia.

The West Bank issue will also depend on how durable the agreement with the UAE proves to be. The ‘West Bank’ is a small area with a population of 30 lakh people out of which about 25 lakh are Palestinians and five lakh Israelis. In the last 20 years, the population of Israeli people has doubled. The Palestinians want the occupied West Bank, East Jerusalem and the Gaza Strip to merge together to form a country, while Israel wants the entire region to be its territory. Israeli Prime Minister Benjamin Netanyahu has postponed the plan but has also said that this file will remain on his table. It is possible that this file will be put on hold and Saudi Arabia will also agree on a peace deal because it wants Israel to fight Iran.

There has been a major change in the policies of both the UAE and Saudi Arabia in recent times. They are keeping Pakistan at an arm’s length as the latter is dancing to the tune of China. China has become friends with Iran. Thus, Pakistan has no longer remained reliable for the UAE and Saudi Arabia. Moreover, despite the help of Pakistan army in the war with Yemen, Saudi Arabia is not able to win. If Israel comes to its aid, it can expect victory. On the other hand, the UAE is engaged in the war with Libya. Israel can help it there too. In short, both these countries need Israel. That is why the UAE has entered into an agreement and the US is trying its best to bring about Israel’s agreement with Saudi Arabia as well.

Now look at this issue from the Indian point of view. If there is peace between Israel and the Gulf countries, India will stand to gain immensely. India has good relations with both the sides. India mostly buys oil from Arab countries. If Pakistan’s influence in Saudi Arabia wears away, it will increase India’s influence and stature rapidly. Israel is already our ally. It’s quite possible that China may provoke Iran against India, but Iran has cordial and close relations with India. Despite the US pressure, India has maintained a strong relationship with Iran.

Iran also needs India’s cooperation. Both are involved in the important Chabahar project. Both are together in the important oil pipeline project. Therefore, Iran will never want to jeopardise relations with India. Overall, India stands to benefit but diplomatic skills will have to be applied. I think the peace agreement between Israel and the UAE will not only affect West Asia, it will have a profound impact on Europe and Africa too because the author of the agreement is the US and opposing it is the cunning China which has spread its tentacles up to Africa. It is too early to assess its impact. Just wait. The effect will be known soon.

The peace agreement between Israel and the United Arab Emirates, sworn enemies for 72 years, is a major and significant development for West Asia. It will definitely have far-reaching consequences. At present, this agreement seems beneficial for India but diplomatic skills will be required to take advantage of the situation. 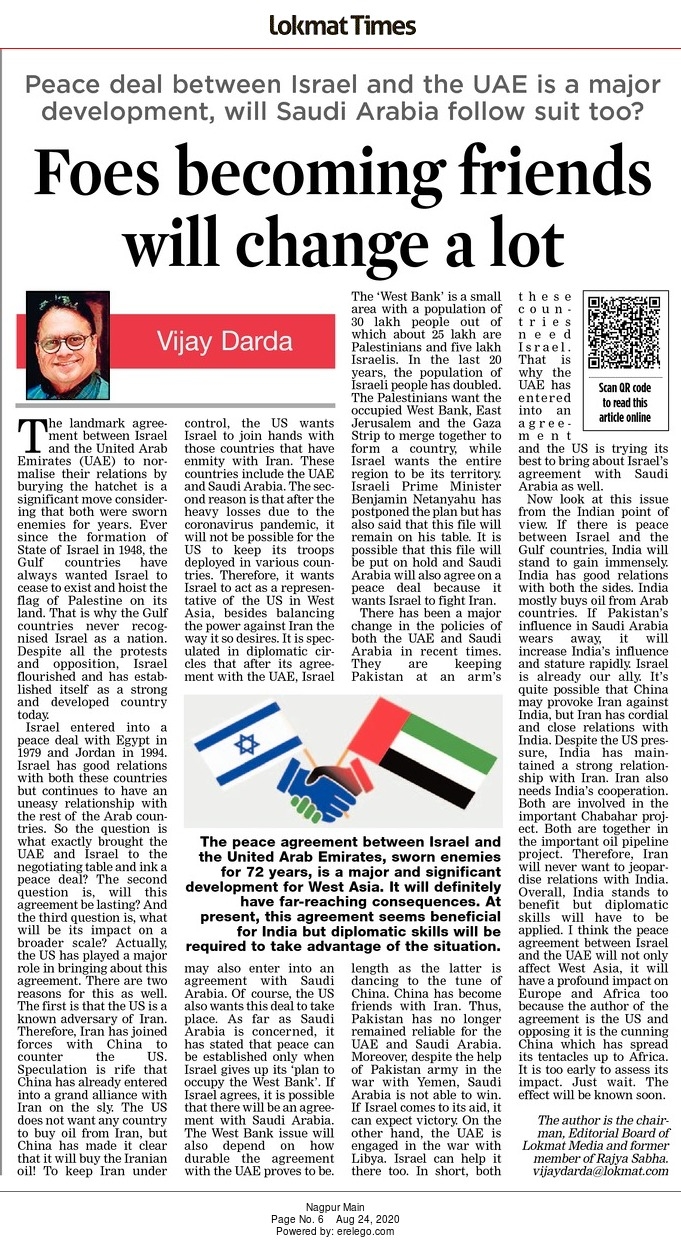 Bravery of Indian soldiers in Israel