The killing of Qasem Soleimani by American forces tantamounts to a spark in gunpowder. If fire breaks out, it will spread far and wide

If viewed from the American point of view, it has eliminated a person who was believed to be responsible for the death of about 500 US soldiers. From the point of view of Iran, it has lost one brave General whose name spread terror. And from global angle, this can prove to be a tinderbox for world peace. Iran cannot digest this incident so easily. It has avowed revenge!

Qasem Soleimani, the head of the Quds Force, an important part of Iran’s Revolutionary Guards, reported directly to the supreme leader of Iran, Ayatollah Ali Khamenei, and was the most powerful person after Khamenei. That is why after his death Iran declared three days of mourning and conferred on him the status of immortal martyr. Iran has now warned the US that it would have to face the dire consequences of its action. In fact, Soleimani was the person who took very important initiative to expand Iran’s dominance in the world. He had great influence in Syria, Yemen and Iraq. He unified and trained Kurdish fighters and Shia militias to defeat the Islamic State in Iraq and Syria. He also played a major role in saving the Bashar al-Assad government of Syria. Soleimani also strengthened forces like Hezbollah and Hamas.

Soleimani had played an important role in getting Iran to turn defiant against the US. He was considered a participant in every strategy to endanger America. Soleimani was also the brain behind the rocket attack on US military bases in Iraq. This was the reason that America became his enemy and was constantly trying to remove him from its path. The US declared Soleimani-led Quds Force as a terrorist organisation on October 25, 2007. In the following years, the United States imposed a lot of sanctions on Iran, but it is believed that Soleimani left no stone unturned to neutralise these sanctions. This further annoyed America. There was also pressure on the US from Saudi Arabia and Israel to somehow remove Soleimani from the path. How much Soleimani’s death means to America can be gauged from the fact that Donald Trump tweeted the US flag after the news of his death was flashed!

Now the moot question is what will happen next? Iran is determined to take revenge. It will definitely attack American, Saudi and Israeli establishments. About 5,000 American soldiers are still stationed in Iraq and Iran can target them. The US has an idea of this, so it has protected its military bases more than before. If Iran intensifies the attack, America can increase its strength there. Moreover, it can also conduct airstrikes to deal with the attacks. In such a situation, Iran will openly go to war because it is confident that Russia will support it in such an eventuality. Russia has described Soleimani’s death as murder and expressed condolences with Iran. China is also seen with Iran but it may not come out openly like Russia!

If a war-like situation develops, it will have a direct impact on oil prices. It has already been estimated. With the death of Soleimani, the global market saw a four per cent jump in oil prices. If Iran attacks some oil tankers passing through its territory, the oil market is sure to catch fire. In such a situation, the whole world will be affected. India, in particular, will be adversely affected. If the oil prices wreak havoc on the doddering Indian economy, the pace of our development is likely to lose steam. The condition of the countries around us will be no different. Other countries of the world will also be affected. Therefore, it is very important that peace is established in the Middle East countries, but its prospects are not very bright.

The Middle East is perhaps such a cursed part of the world where there is plenty of oil wealth but its destiny is linked with bloodshed. Now all the countries of the world should think together on how to establish peace in this region.

The killing of Iran’s most powerful General is not a normal occurrence. The already turbulent Middle East region has moved closer in the direction of bloody conflict. Certainly this situation will prove dangerous for the whole world. 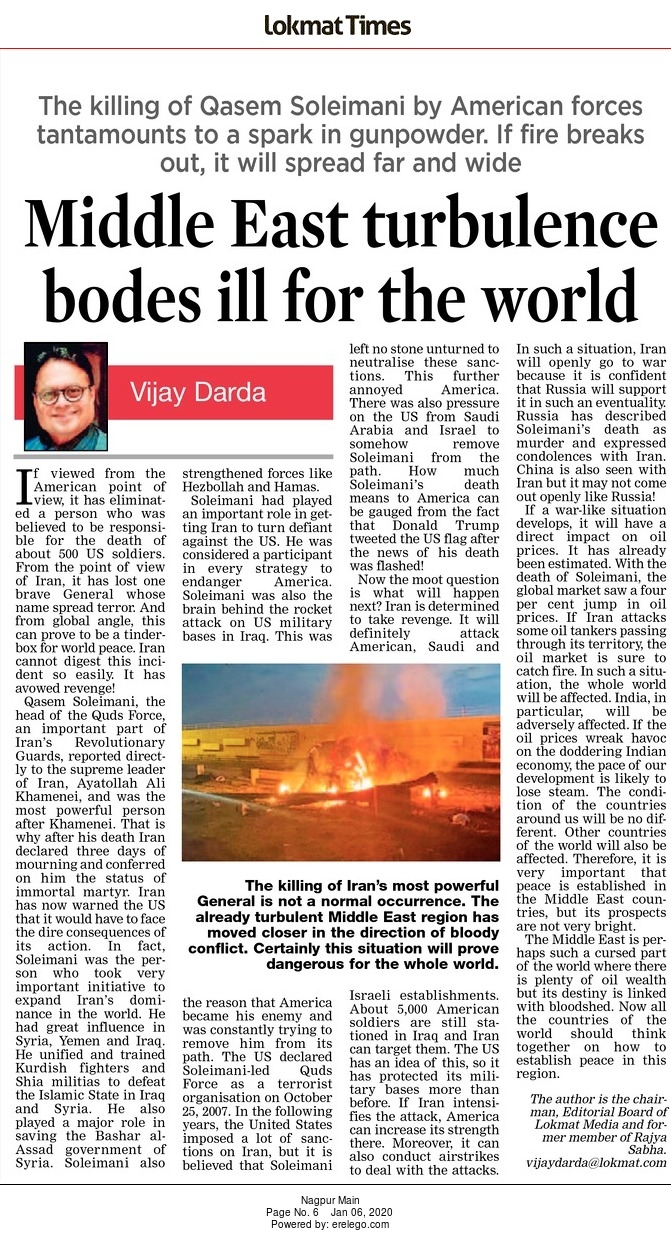