From drought to floods: The struggle continues

Recently, I am touring European countries. I feel delighted to see the crystal clear rivers and magnificent forests across Europe, but I am amazed at the rising temperature here. France’s temperature reached 45 degrees Celsius on Friday. This kind of temperature is unbearably high in Europe. In Switzerland, the government has released heat warning. Why is there so much heat? It is learnt that the main cause of the rise in temperatures in Europe is the warm winds blowing from African continent. That is, the damage to the environment anywhere will impact the whole world.

We are also seeing the result of environmental damage in our own country. Last year, drinking water in Chennai was almost non-available. The situation became frightening. Chennai is one of the 21 cities in the country where the possibility of the end of groundwater by 2020 has already been predicted. You may remember that it is the same Chennai now longing for water which had experienced devastating floods in 2015 and which had suffered a massive loss of lives and property. Even this year, you will see that many of those areas which were earlier in the grip of drought will face flood situation. So, the losses caused by both drought and floods are different! This is the result of neglecting the environment. Earlier, rainwater used to be stopped and conserved by building bunds. The water so retained would percolate into the ground.

Every village had tanks in which rain water would be collected which later percolated into the ground. There were many dense forests. Trees and plants used to help the percolation of rainwater into the ground but gradually we destroyed the forests. The lakes have dried up. In the urban areas, a network of concrete was laid in such a way that water could not percolate down the ground. In such a situation, it is but natural that the groundwater level will go down. You will feel saddened to know that in addition to Chennai, the ground water of cities like Bengaluru, Vellore, Hyderabad, Indore, Ratlam, Gandhinagar, Ajmer, Jaipur, Jodhpur, Bikaner, Agra, New Delhi, Ghaziabad, Yamunanagar, Gurugram, Ludhiana, Mohali, Amritsar, Patiala and Jalandhar too will run out of water in 2020!

However, the government has framed rules to make water harvesting for every new house mandatory but this rule is observed more in breach. One is the lack of awareness among the people and the second thing is that there is no strictness on the part of the local government. It is estimated that our country receives rainfall of about 4,000 billion cubic metres every year. The bulk of it runs off into the ocean. Only 10 percent of that, 400 billion cubic metres of water, can be used. The rivers of South India receive 90 percent of water and rivers of North India receive 80 per cent water between June and September respectively. If we can store this water through the canals and small dams, then the problem of drought can certainly be solved. Water can be stopped and conserved by making small dams and lakes. The only result of environmental damage is that rivers are dying.

Even the condition of the Ganga is not very happy. Rivers like Yamuna and Gandak have almost died. Narmada is becoming weak and there is no drop of water in Shipra. On one side, we have polluted the rivers and on the other side we are continuously destroying the forests that is life to them. As far as the construction of canals and dams for storing of river water is concerned, this entire process is in the grip of corruption. There are dozens of such projects that have been hanging fire for the last 15/20 years. It is not that corruption is not there in Europe but it is at the very top level. At the base level, work is quite good! These countries have done a great job and are doing particularly well in the field of water conservation.

When I was an MP, the then President Abdul Kalam had summoned the MPs and appealed to them to strive for revival of the wells, lakes and ponds in our areas. He also told us to save the forests and plants and trees in our areas. Trees and water can only save the environment. If the environment is good then the world could be saved. It seems that the message of Abdul Kalam should be spread among the people so that we will be able to save trees and water, protect the forests on the Earth and ensure that water is conserved and it percolates into the ground.

How bad the situation is in the country can be estimated by the fact that our population was about 35 crores at the time of independence and that time 5,000 cubic metres of water was available for every person. Now, this availability is only a little over 1000 cubic metres. Our population has multiplied and the water needs have increased too but if we had saved the forests and had we not spread the concrete jungle, the condition would not have deteriorated to such an extent. Scientists believe that if we have to deal with drought and floods, at least 600 billion cubic metres of water must be conserved in lakes, ponds and other reservoirs before it could reach the rivers. Ralegan Siddhi in Maharashtra and Alwar in Rajasthan have shown a way of conserving water. People there built small lakes and ponds and saved rain water from going waste. In those areas, the level of ground water has increased. It is clear that if we manage the rain water properly, we will get rid of drought and even the floods will not be able to harm us!

We have experienced very high temperatures in the last three months and after a long wait, the monsoon has arrived. There will be some relief now but the major part of the country will still be in the grip of floods. This is the result of damage to the environment. This is impacting the whole world. African warm winds have lifted the temperature of France to 45 degrees Celsius. 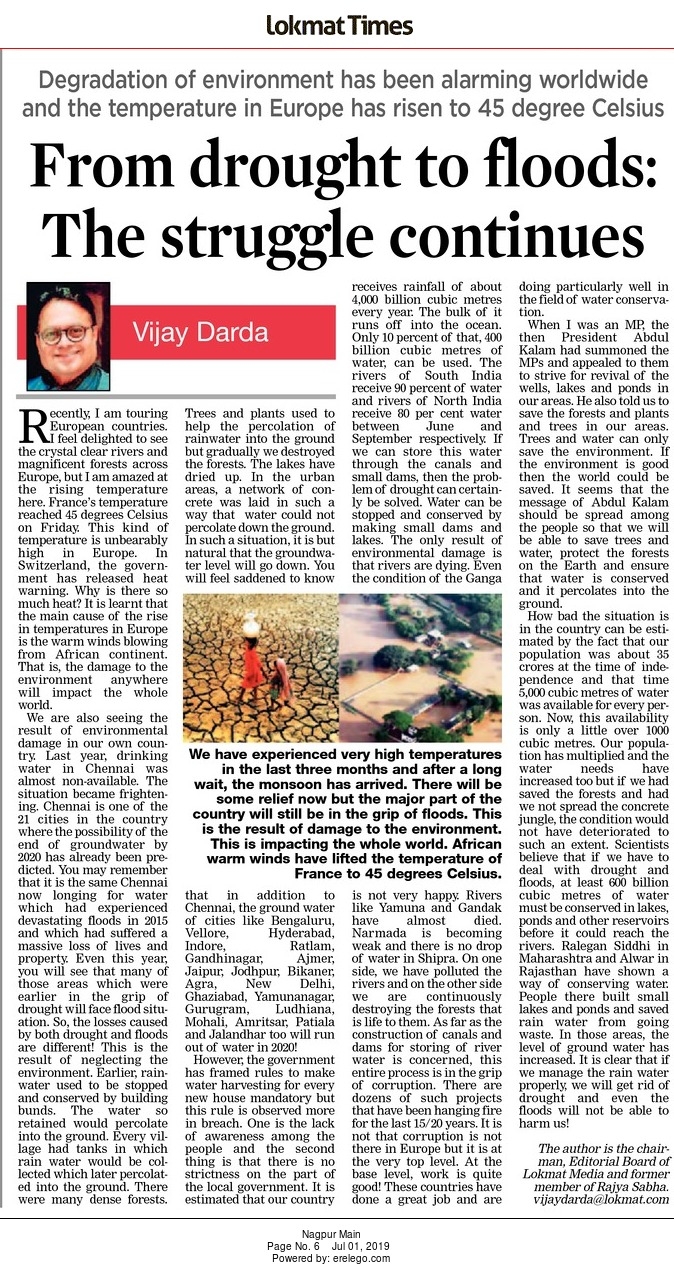