Composite Water Management Index report is frightening; ground water will be zero in 21 cities next year

By making public the report of the Composite Water Management Index 2018, the Niti Aayog has opened the eyes of the whole country. Dreadful picture of the future has been painted before the country. The ground water in Bengaluru, Chennai, Vellore, Hyderabad, Indore, Ratlam, Gandhinagar, Ajmer, Jaipur, Jodhpur, Bikaner, Agra, New Delhi, Ghaziabad, Gurugram, Yamunanagar, Ludhiana, Mohali, Amritsar, Jalandhar and Patiala will become zero next year. India will be barely able to meet half of the water requirements of its teeming masses by 2030. Farming and industry will be affected the most. This will have an impact on our economy and the GDP will fall by about 6 percent. The details of the report are more frightening.

I am surprised that there is no one who has expressed any serious concern about this report. There has been some concern in the foreign media but we have adopted an ostrich-like attitude on this aspect. There is neither concern at the government level nor at the social level. We simply don’t seem to care. This negligence towards water has brought us to the brink of devastation. There are no earnest discussions and efforts on water conservation.

There is no doubt that years of drought has made the situation worse, but are we saving the rainwater where it rains aplenty? According to the Central Water Commission, India needs a maximum of 3000 billion cubic metres of water every year while it rains around 4,000 billion cubic metres. The problem is that we can only use 8 percent of the rain water. In almost all cities and villages, wetlands, ponds, wells and local rivers have vanished into thin air. So, the question is where will the rainwater stay? According to the Wildlife Institute of India, about 70 to 80 percent of the ponds and lakes in the Gangetic plains have disappeared. The same is true of other parts of the country.

The role of the common man in eliminating these ponds and lakes has been the most crucial and the government has kept its eyes shut. When the forests were destroyed, soil erosion increased and this affected the water bodies. Large ponds also have reduced the storage capacity. The result of not retaining and conserving the rain water is that about 50 percent of India is affected by drought. Our Vidarbha and Marathwada regions also figure in this list. Millions of people in the country are not getting pure drinking water. Once upon a time, Chennai had a huge wetland, large lakes but everything has disappeared.

The Government of India has recently formed the ministry of water power. The ministry has announced that a tap connection will be provided to every house in India by 2024. Let’s assume that tap connections will be extended but the question is where will the water come from if there is no water? Apart from this, the reality is that the budget of the ministry of water resources this year is less than the amount allocated in the budget last year for this task. The problem of water shortage is becoming so acute that the possibility of civil war over the sharing of scarce resources cannot be ruled out, besides causing loss to the animal kingdom and public exchequer. India harnesses the most underground water resources in the world. More than China and the US put together. According to a 2015 report by the Standing Committee on Water Resources, 89 percent of the water we extract from the land is used in agriculture and the remaining 9 percent is used for drinking purpose.

Two percent is used by industries. On the whole, it shows that 50 per cent of the urban requirements and 85 per cent of water for domestic use in rural areas are drawn from under the ground. Last year, a report of the Central Ground Water Board was placed in Parliament which stated that in 10 years from 2007 to 2017, the underground water level was seriously reduced. Reports from IIT, Kharagpur and Athabasca University in Canada say that we Indians use 230 cubic kilometres of ground water every year. This is about a quarter of the world’s consumption.

We are lethargic and apathetic even in the case of reuse of water. Nearly 80 percent of the water that reaches the houses is drained out in the sewers. In contrast to this, Israel recycles hundred percent of the water reaching homes, and 94 percent of the recycled water is then sent for use in homes. Singapore is also doing amazing things in terms of water management. We have to make arrangements like these countries. We have to revive our local water reservoirs so that rain water can be saved and conserved. Rainwater harvesting must be strictly adhered to and water leakages in pipes and tubes in cities should be removed. Water conservation, protection and management have to be transformed into a movement, then only the situation can be expected to improve. If we continue to be careless like this, then our tomorrow will be very grim. Both the government and the common man have to play their respective roles in this effort!

We do not have much time left now. If we do not bring drastic changes in the field of water conservation and water management within the next five years then the situation will get worse. There will be no drinking water left; and it will have very serious effect on agriculture. Industries will be affected and the GDP will fall by 6 percent. 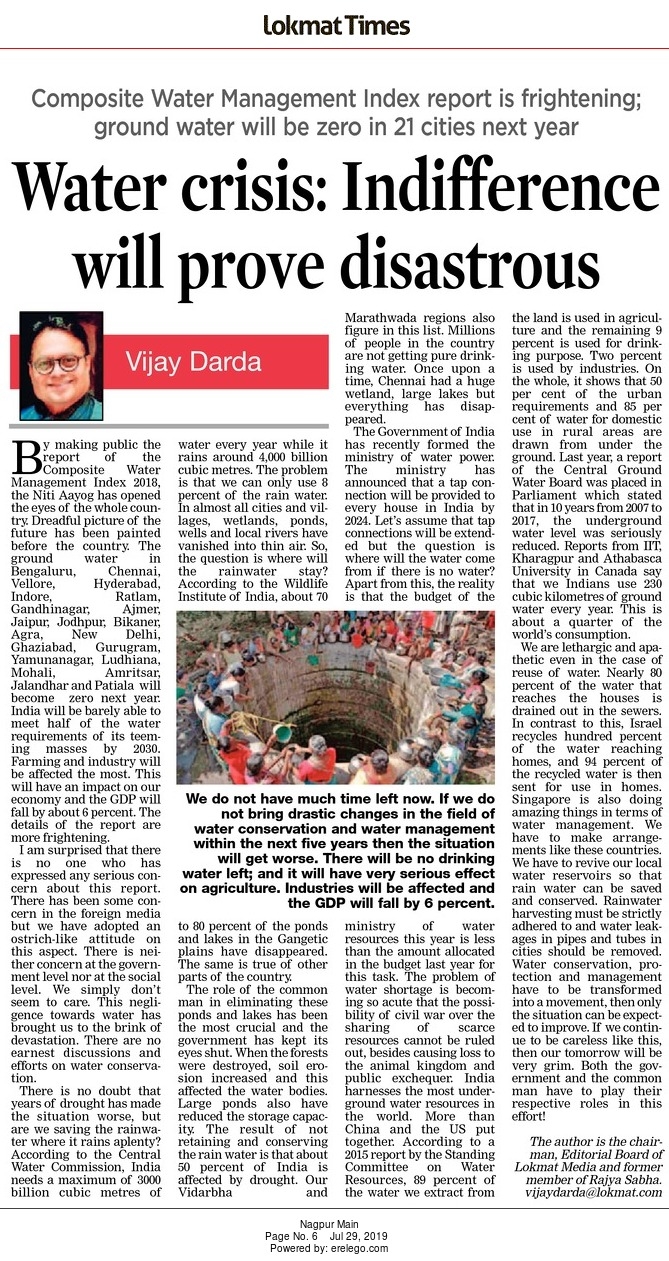 From drought to floods: The struggle continues